By John Riley on January 22, 2015 @JohnAndresRiley 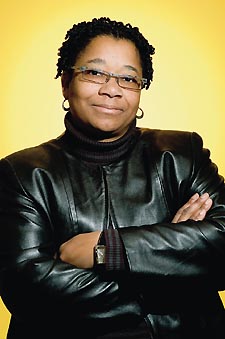 Mayor Muriel Bowser held a press conference Thursday morning at the Watha T. Daniel Shaw Library to announce a change of name for the Mayor’s Office of GLBT Affairs and appoint longtime LGBT activist and former radio host and party promoter Sheila Alexander-Reid as the director for the agency, which deals with a host of issues impacting the District’s LGBT and allied communities and fosters communication between various segments of the community.

Alexander-Reid has often been at the forefront of LGBT issues in the District, even serving as moderator of a meeting between community members and high-ranking officials within the Metropolitan Police Department, including Chief Cathy Lanier, to discuss public safety concerns last year and delving into various aspects of LGBT life during her tenure at WPFW 89.3 FM on her self-titled radio show. At Thursday’s press conference, Bowser also announced the appointment of Terrance Laney, a former congressional staffer for U.S. Rep. Maxine Waters (D-Calif.), as deputy director of the newly-renamed Office of LGBT Affairs.

“Today is a true example of our steps forward,” Bowser said in announcing the appointments of Alexander-Reid and Laney. “Our administration and government has to be reflective of the city we are entrusted to govern.”

The office’s name will officially be changed from GLBT Affairs to LGBT Affairs to better reflect how the members of the community refers to themselves and the emergence of voices, particularly those of lesbians or transgender people, which were not as prominent at the beginning of the gay rights movement, Alexander-Reid said.

Bowser also used the opportunity to stress several initiatives or priorities that she sees as important to LGBT progress. She announced that she has recommitted the District to Mayors for Marriage Equality, a coalition of local government executives from around the country who support and advocate on behalf of the freedom to marry for same-sex couples. Taking questions from the crowd, Bowser touted her work as a Councilmember last year to allot $200,000 in the 2015 fiscal year budget that has been earmarked — or as she put it, “funded and ready to go” — to study housing and homelessness. She particularly stressed that her focus on homelessness would look at two vulnerable populations: LGBT youth and seniors.

When asked by an activist if she would commit to helping organize the 2015 U.S. Conference on AIDS, which is slated to occur in the District for the first time in December, Bowser confirmed she would, saying, “Sign me up,” and in a related response to an inquiry from another questioner, committed to using the District’s existing resources to bring down the city’s HIV rate, mirroring initiatives like the one championed by Gov. Andrew Cuomo (D-N.Y.) to “end” the HIV/AIDS crisis. She also talked of the importance of cultural competency training for all government agency representatives, such as police, firefighters and EMTs and those in the Department of Human Services, and promised transparency in the process of awarding grants to groups doing good work with the LGBT community, such as groups focused on combating hate crimes or domestic/intimate partner violence.

In response to a reporter’s question asking what is left to do for the LGBT community after marriage equality, Alexander-Reid responded that there was still much to do.

“The LGBTQ community is impacted by issues that are not always thought of as ‘traditional’ issues as well,” she said. “Things like affordable housing, access to quality health care, and economic development. So, in addition to all the things the mayor mentioned, we’re going to work on those things as well.”

In response to a question from Ruby Corado, a longtime transgender activist and executive director of the social services agency and LGBT community center Casa Ruby, Bowser said that people could be assured that any concerns, particularly those related to access to important resources, that are brought to the Office of LGBT Affairs will be acted upon, pledging that Alexander-Reid will have both access to her and influence in terms of how Bowser can best address those concerns from a policy standpoint.

Following the press conference, Corado said she felt like Bowser had sufficiently answered her question, and was particularly pleased that Alexander-Reid stressed that the office would focus on addressing concerns of the transgender community.

“I’m happy, because our community can no longer take the punches,” she said. “There needs to be an investment from government into the needs of the community. There’s a lot of services that need to happen. Also, community development. LGBT people thrive in many areas of the city, and we need to have access to the opportunities that everyone else has.”

Richard J. Rosendall, the president of the Gay and Lesbian Activists Alliance (GLAA), echoed remarks by Bowser and Reid talking of diverse voices within the movement by noting  that the D.C. LGBT community’s success in building strong coalitions across the city could serve as an example to other cities around the country.

“You cannot build trust on a small schedule. You have to earn trust, and, because we had done coalition work for many years…when marriage equality came along, we demonstrated the ability to out-organize our opponents. And our opponents underestimated the people of Washington,” Rosendall said. “When you build a diverse coalition, it has to be many voices speaking up.”

Rosendall also said that the progress that the LGBT community has made in the District needs to be acknowledged even as the community tries to work collectively on future initiatives.

“There’s a reason that we at GLAA changed our policy brief title to ‘Building on Victory,’ because we have to realize that we are building on victory. We have a long way to go,” Rosendall said. “And when people say, ‘What is there left to do?’ we give them a copy of our brief, which reflects consultations with advocates across our community…. But we’ve come a very long way, and we’ve done it together in a unified way, and we have much to be proud of here in D.C. Muriel Bowser is a known, established ally of our community, most of the [Council] bills of concern to our community have passed on the consent calendar, because this is a very liberal jurisdiction, and because the groundwork was laid over a period of decades — not just in city hall, but in neighborhoods across the city — building relationships, credibility and trust.”

John Riley is the local news reporter for Metro Weekly. He can be reached at jriley@metroweekly.com
← Previous Story Virginia’s Hate Crimes Bill Rests in Their Hands
Next Story → Conversion Therapy Ban for Minors Dies in Virginia Senate