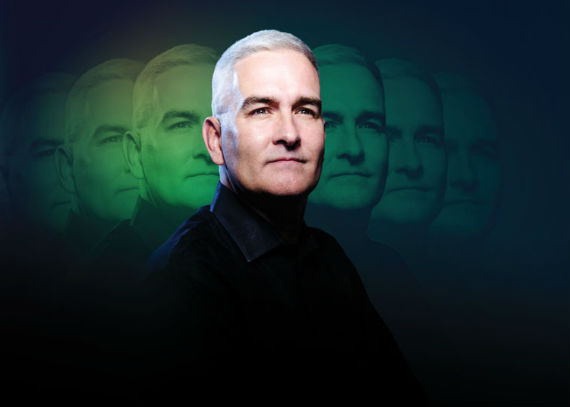 “I remember the first night that I auditioned at Tracks,” James Graham says. “Marty [Chernoff] the owner came up to me at the end of the night and said, ‘I want to just make sure this isn’t a fluke.'” He scheduled Graham for the very next weekend, Halloween 1994, to see if lightning would strike twice. Did it ever: Graham became a weekly resident at Tracks, playing until the fabled nightclub closed in 1999.

Graham has made it something of a lifelong tradition to pleasantly surprise people — chiefly through his love of dance music. “If you can imagine me growing up in New York, then coming to Washington, where my neighborhood was predominantly Latino and black, and I’m liking soul and disco,” he recalls. “So they were like, ‘What the hell is he listening to?’

“And when I first started playing in different clubs,” he continues, “house music was always looked down upon as either [too] gay or too black. There were all these stigmas attached to it. I’m so happy that we’ve gotten past that.”

Graham is neither gay nor black, but whether at Tracks, or the now-closed Badlands, among other hot spots around D.C., Graham has often played to a mixed crowd, if not a predominantly gay one. He was just wired that way. “Bless my mother’s soul, she was a Quaker,” he explains. “She believed that you can’t judge people, and I was raised that way. Somebody’s sexual preference, somebody’s skin color, someone’s religion — you were born that way, and that’s the way it is…. Growing up with different people, both gay/straight, black/white/whatever, it just provided me that opportunity to not be a judgmental person and understanding that music is…for everybody.”

Graham got hooked on nightlife early, tagging along with his uncle, who was a club lighting and sound engineer throughout the Mid-Atlantic region. He eventually gravitated to the turntables. Last decade, he even co-owned the DJ Hut, the record store for DJs that briefly occupied the space on P Street in Dupont Circle where 12 Inch Dance Records once reigned. “That was my love until the music industry went upside down,” he says. “My dream of owning a record store quickly disappeared.”

After a decade of spinning every Saturday night at Georgetown’s former swanky spot Mie N Yu, Graham took a little time off as a club DJ and began working as a manager at a car dealership in Virginia. But he’s now raring to get back behind the turntables in a bigger way. “I’m really wanting to take this on the road, if you will,” he says. And he’s eager to show that last year’s great set at Mid-Atlantic Leather’s Reaction dance wasn’t any more of a fluke than his debut at Tracks two decades ago. Reaction organizer Danny Linden has brought him back to be the party’s sole DJ, allowing him to give partygoers a true musical journey from open to close.

“I like all dance music,” he says, “[but] I prefer syrupy, soulful type of stuff.” And that’s the right overall vibe for a Sunday night party such as Reaction. “You’re winding down from crazy Friday and Saturday nights,” he notes, “so you’re coming into Sunday and you don’t want to beat the horse too bad.”

But that doesn’t mean he won’t throw in “a little bit of tribal percussion,” or “a little bit of edge” courtesy of a choice cut or two from Tiesto, Above and Beyond or another of the better producers in today’s EDM scene. Graham strives to remain as current now as ever.

“I’m creeping up in age,” he says, “but musically and mentally I’m still that twenty-something/thirty-something guy that was jumping around all the different clubs.”