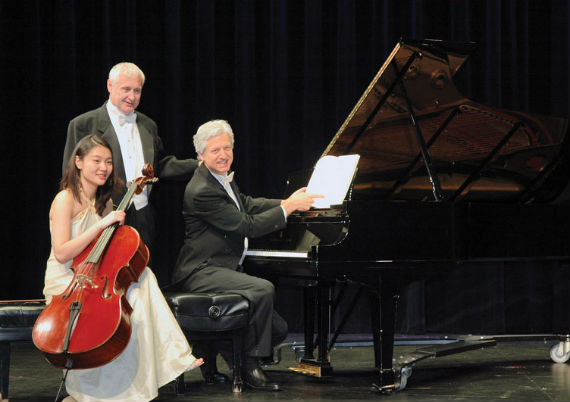 “It’s amazing how quickly time passes. It feels like only yesterday that we were playing the opening concerts.”

In reality it’s been 10 years since Piotr Gajewski’s National Philharmonic made its debut, christening the Music Center at Strathmore in Maryland. A decade later, the performing arts complex’s gleaming edifice remains, as Gajewski puts it, “as good a concert hall as there is anywhere in the world” and “a marvel of acoustics.

“For my ensemble,” he continues, “to say it’s been a tremendous boost is an understatement. It just completely transformed what we are able to do.”

Before the Music Center opened, Gajewski, a native of Poland who grew up in Boston, led the National Chamber Ensemble. Founded in Rockville in 1985, Gajewski led its merger two decades later with Montgomery County’s Masterworks Chorus, creating what became the National Philharmonic and Chorale.

Next weekend the ensemble presents two concerts at the Music Center: An annual, all-Chopin recital by pianist Brian Ganz on Saturday, Feb. 7, and a reprise of the orchestra’s opening concerts last decade, when Gajewski conducted both Beethoven’s towering Ninth Symphony and the late Andreas Makris’s Strathmore Overture — a commission by the orchestra specifically for its debut. As of press time, the Ganz recital is getting close to selling out, and the anniversary concert already has.

Gajewski calls such sell-out success “gratifying.” It certainly wasn’t a given the orchestra would succeed at Strathmore. The nearly 2,000-seat Music Center was a giant leap up from the original presenting venue, the 446-seat F. Scott Fitzgerald Theatre in Rockville. In fact, many arts organizations didn’t survive plans even half that ambitious over the same time period, victims of the recession. Yet even sharing the new, large Music Center with another more widely known resident orchestra — the Baltimore Symphony Orchestra — didn’t quell the National Philharmonic.

“We’ve had our ups and downs, but in the big picture we’re thriving,” Gajewski says. “We’re poised for growth and looking forward to innovative projects and playing more music by American and living composers.” — Doug Rule

Doug Rule covers the arts, theater, music, food, nightlife and culture as contributing editor for Metro Weekly. Follow him on Twitter @ruleonwriting.
← Previous Story Flashback: Top 20 Singles from this week 30 Years ago – January 26, 1985
Next Story → Bob Dylan mines the past on his brilliant new “Shadows in the Night”