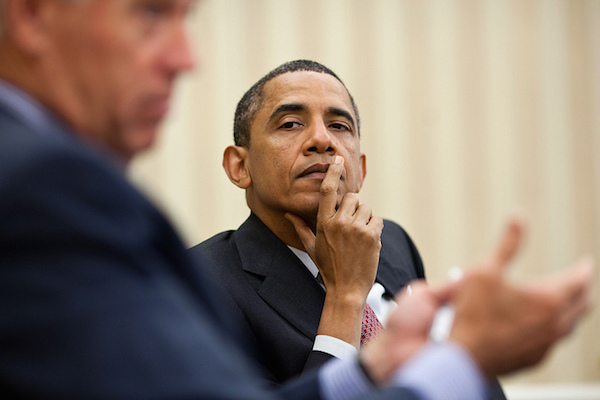 Hours before the Supreme Court justices are set to consider once again taking up the issue of same-sex marriage, the White House declined to say Thursday whether President Barack Obama would welcome a ruling legalizing same-sex marriage nationwide.

“The president’s been real clear about what he thinks on this and his personal views have been very closely scrutinized, as they should be,” White House press secretary Josh Earnest told reporters. Nevertheless, Earnest continued, “I don’t want to get out ahead of any Supreme Court ruling that may be coming. I think you can probably anticipate what the president’s reaction might be based on the number of times that he’s expressed publicly what his position is on this issue.”

Earnest’s remarks come on the eve of the Supreme Court justices’ Friday conference, where, behind closed doors, they will consider cases challenging same-sex marriage bans in four states: Kentucky, Michigan, Ohio and Tennessee. Those same-sex marriage bans were upheld as constitutional by the 6th Circuit Court of Appeals in November, breaking with other federal appeals courts that have considered the issue and creating a split among the circuit courts. The Supreme Court has been asked to consider all four state marriage bans by plaintiffs in the four cases. With the exception of Tennessee, all of the states defending those respective bans have agreed the court should hear the cases.

Earnest told reporters that the Obama administration is supportive of the kinds of decisions that expand freedom and liberty, including a federal court ruling striking down Florida’s same-sex marriage ban, which took effect last week.

“That certainly was good news and consistent with the president’s view and he’s hopeful other courts will make the same decision,” Earnest said of the arrival of marriage equality to Florida.

But the White House’s refusal to explicitly state Obama’s hope for national resolution on same-sex marriage is puzzling, particularly considering statements he and other members of his administration have made in the past.

“There’s no need for nuance here,” said Fred Sainz, vice president of the Human Rights Campaign. “Of course the president wants a 50 state marriage ruling. Anything short of that would be inconsistent with the president’s own statements and actions. Once the president said that he thought this was a federal constitutional issue, he told everyone that he wants marriage equality across the entire country. The White House should just say that too.”

Obama’s outgoing attorney general, Eric Holder, has repeatedly stated that should the Supreme Court take up a case challenging state bans on same-sex marriage, the Obama administration will argue such bans are unconstitutional.

“I expect that the Justice Department will file a brief and the brief will be consistent with the positions that we have taken in the past in support of same-sex marriage,” Holder told Pete Williams of NBC News in September. “I can’t imagine that we would take any other position while this president is in office and certainly as long as I am attorney general or anybody who is my successor.”

It is widely anticipated that the Supreme Court will consider the constitutionality of state bans on same-sex marriage this term, with a decision likely handed down in June. Following the arrival of marriage equality to Florida last week, approximately 70 percent of the nation’s population — 216 million Americans — lives in one of 36 states, plus D.C., that permit same-sex marriage.