By Justin Snow on February 3, 2015 @JustinCSnow 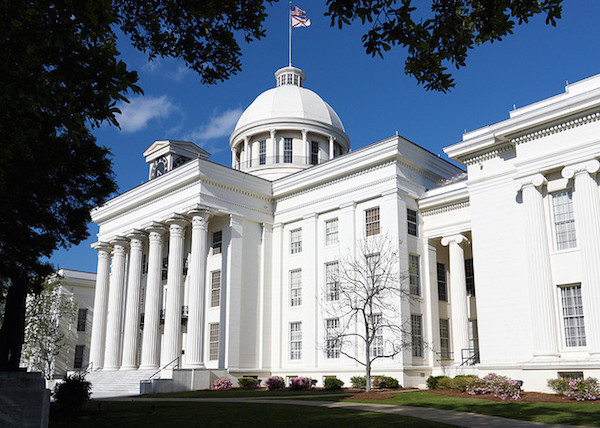 Barring action by the U.S. Supreme Court, same-sex marriages will begin in Alabama next week.

The 11th Circuit Court of Appeals denied a request by Alabama Attorney General Luther Strange to extend the stay of a lower court’s ruling striking down the state’s ban on same-sex marriage. The three-judge panel gave no explanation for their denial of a stay.

U.S. District Court Judge Callie V. S. Granade ruled last month in two separate cases that Alabama law prohibiting same-sex marriage violates the Due Process Clause and Equal Protection Clause of the Fourteenth Amendment to the U.S. Constitution. Granade stayed her decisions for 14-days to allow the state to appeal. The stay is scheduled to expire on February 9.

Granade’s rulings have garnered national attention as Alabama Chief Justice Roy Moore has urged state officials to disregard the federal court and uphold the state’s marriage ban. Moore is facing an ethics complaint for his statements.

Alabama will ask the Supreme Court to extend the stay, Strange confirmed. “I am disappointed in the 11th U.S. Circuit Court’s decision not to stay the federal district court’s ruling.  The confusion that has been created by the District Court’s ruling could linger for months until the U.S. Supreme Court resolves this issue once and for all,” Strange said in a statement. “My office vigorously defended the constitutionality of Alabama’s marriage laws in the Searcy and Strawser cases, and we have appealed the court’s orders in those cases.  Today, we filed a motion with the U.S. Supreme Court to stay the federal court’s decision until the Supreme Court finally rules on the issue in June.”

However, previous cases indicate the nation’s highest court may not grant an extension of the stay. In December, the 11th Circuit also denied a request to extend the stay on the implementation date of a lower court ruling striking down Florida’s same-sex marriage ban. Florida Attorney General Pam Bondi asked Supreme Court Justice Clarence Thomas, who oversees the 11th Circuit, to extend the stay. Thomas referred the issue to the full court, which denied the stay and allowed same-sex marriages to proceed. The denial noted that Thomas and Justice Antonin Scalia would have granted the stay.

Thomas and Scalia have dissented in a number of stay requests that have been denied by their colleagues. But unlike those cases, which have pertained to states in the circuits impacted by the Supreme Court’s decision not to hear the handful of marriage-equality cases in October, Florida is in the 11th Circuit, which has not yet addressed the issue of same-sex marriage. While a year ago the high court was quick to stay marriages in Utah as the case was appealed, the justices appear increasingly comfortable with allowing same-sex marriages to proceed before they themselves have considered the issue. Later this year the justices will rule on whether the Constitution prohibits states from banning same-sex marriage. 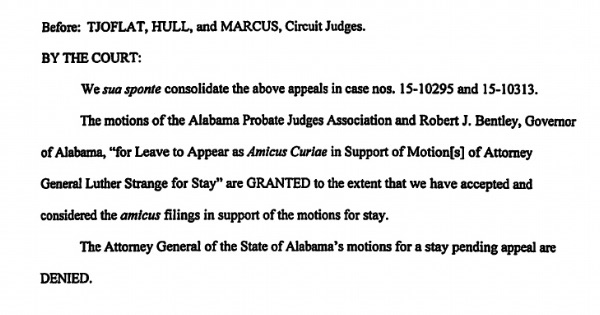 Editor’s Note: This story has been updated to include a statement from Luther Strange.