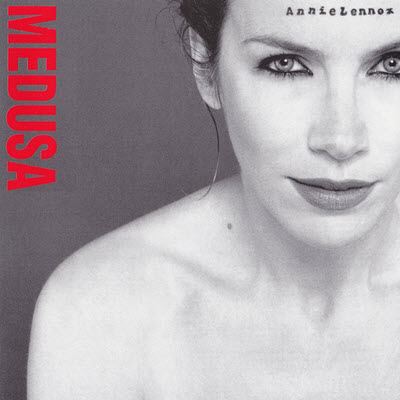 Over 30 years since Eurythmics scored their one and only #1 single in America with “Sweet Dreams (are made of this),” Annie Lennox is hotter than ever. The internet is abuzz over her show-stealing performance on the Grammys Sunday night, duetting with Hozier on his smash single “Take Me To Church” before launching into a knockout rendition of Screamin’ Jay Hawkins’ classic “I Put a Spell on You.” Thanks to her high-profile and widely-praised appearance, sales of her 2014 collection of standards, Nostalgia, have spiked dramatically this week on iTunes. A reworking of “I Put a Spell On You” will also be featured on the upcoming soundtrack to the film version of the wildly successful novel Fifty Shades of Grey, which will provide even more visibility for Lennox. One can hope that new fans are coming to appreciate Lennox as she mixes it up with today’s top mainstream artists and displays her gifts as a vocalist and performer.

Nostalgia finds Lennox exploring some of the greatest pop and jazz standards in American history (check out a brief review on my year-end Best 30 Albums of 2014 list). It’s not her first experience with releasing a covers album. In a couple weeks Lennox’s second solo release, Medusa, will hit its 20-year anniversary. It’s an album of covers that range from well-known hits to obscurities. It became a substantial hit for Lennox, and a worthy successor to her landmark solo debut, Diva. With renewed interest in Lennox’s impressive body of work both with Eurythmics and as a solo artist, the time is perfect to take a look back at Medusa two decades after its release.

The lead single from Medusa is the album’s dramatic centerpiece – “No More ‘I Love You’s.” The quirky song was first written and released by the new wave/alternative duo The Lover Speaks on their 1986 self-titled debut. The duo was championed by Dave Stewart, who helped them get a record deal and lined them up for the opening slot on Eurythmics’ massively successful 1986 tour in support of their smash album Revenge. The Lover Speaks’ recording of “No More ‘I Love You’s” did no more than graze the lower reaches of the pop chart, and was soon forgotten. Subsequent singles tanked, a planned second album failed to materialize, and the group broke up. The Lover Speaks has long been out of print, although a remastered and expanded edition is due from Cherry Red Records in May. “No More ‘I Love You’s” was largely forgotten until Lennox resurrected it for Medusa. Its idiosyncrasies play right into her strengths. Lennox and producer Stephen Lipson turn the inventive composition into a piece of epic grandeur, with Lennox delivering a dazzling vocal performance, arguably the finest of her career. The song’s arrangement and production – the gorgeous cascade of layered vocals and keyboards over the stately pulse of a beat – couldn’t be more heavenly. The epic climax starting at about the 3:07 point is stunning beyond words. “No More ‘I Love You’s” soared to #2 in the U.K. and became a major hit in America as well, helped in part by a wonderfully theatrical video co-directed by Lennox with Joe Dyer. It was nominated for an MTV Video Music Award for Best Female Video, and Lennox upset Mariah Carey, Vanessa Williams and Bonnie Raitt at the 1995 Grammy Awards with a win for Best Female Pop Vocal Performance. A well-deserved accolade against stiff competition.

The second single was her glistening recording of Procol Harum’s 1967 ballad “A Whiter Shade of Pale,” a smash hit on both sides of the Atlantic and a classic-rock radio staple. Lennox’s version is built on shimmering waves of keyboard, with the wistful organ riff from the original being replaced by a spritely synthesizer that sounds almost like a harpsichord. While the original is plodding stoner rock, Annie’s version is ethereal and otherworldly. Her vocal performance is terrific, and again the arrangement is enchanting. The single hit #16 in the U.K. but missed the American pop chart.

Lennox’s recording of Bob Marley’s 1977 single “Waiting in Vain” became the third single taken from Medusa in September of ‘95. She doesn’t try to recreate the ultra-relaxed vibe of the original. Her version is smooth and lovely during the verses, with a simple electronic rhythm, keyboards and beautiful lines of acoustic guitar. Then it erupts during the dramatic chorus with horns, arranged by the great Anne Dudley, blasting and swerving their way around Lennox’s dynamic vocals. “Waiting in Vain” hit #31 on the U.K. singles chart.

The final single was Lennox’s haunting version of Paul Simon’s ballad “Something So Right,” originally from his 1973 album There Goes Rhymin’ Simon. It closes the album with elegance, a lovely vocal over a simple electric piano accompaniment with tasteful strings and brass. On the single version she re-recorded it as a vocal duet with Paul Simon himself, but it was only able to scrape to #44 on the U.K. single chart.

It’s possible that Lennox may have fared better on the singles charts if she’d released a couple of the catchier up-tempo tracks instead of all ballads. The logical second American single might have been “Train in Vain.” She turns the spiky rocker from The Clash’s seminal 1979 album London Calling and turns it into electro-pop with an irresistible bass hook and deeply soulful vocals. It would have been perfect for radio play in the U.S. in 1995; in fact it did receive some airplay despite never being an official single. A strange missed opportunity; “Train in Vain” is by far the most obviously commercial track on the album. Another candidate is her synth-heavy take on Al Green’s 1974 hit “Take Me To the River.” Edgy, tense and emotional, “Take Me To the River” features a wonderfully manic vocal arrangement. Producer Stephen Lipson must be mentioned again – he deserves an award for his spectacular work on this album. “Take Me to the River” is arguably the closest Lennox has come in her solo career to capturing a very Eurythmics-like vibe.

Lennox’s interpretation of Neil Young’s “Don’t Let it Bring You Down,” from his 1970 album After the Gold Rush, has an ethereal beauty. Lennox emulates Young’s unique vocal from the original over a wall of keyboard and a plodding drum beat. The elements combine for a rather surreal effect, which works well with Young’s ambiguous lyrics. Lennox also pulls off an arresting cover of The Temptations’ “Can’t Get Next To You,” a frantic change of pace on an album that has a generally mellow vibe. It’s a superb discofied recording with vibrant strings weaving around the funky guitar. Her cover of The Blue Nile’s brilliant “Downtown Lights,” the lead single from their 1989 album Hats, is a tour de force. Lennox worked with The Blue Nile on “The Gift” from Diva, which has a similar sound to “Downtown Lights,” so it’s a perfect fit. The long, complex ballad suits Lennox’s voice as if it were written for her. It’s a tall order to take on a track as exquisite as The Blue Nile’s original recording of “Downtown Lights,” but Lennox pulls it off with grace and aplomb.

She also lends her soulful voice to a cover of The Persuaders’ evocative 1971 single “Thin Line Between Love and Hate,” a song The Pretenders covered and released as a single from their 1984 album Learning to Crawl. Lennox’s version is riveting; like all of the songs on Medusa, she obviously connects with the material deeply.

Also worth tracking down are four tracks that Lennox left off the album but released elsewhere: B-sides include a superb version of “Heaven,” originally by The Psychedelic Furs, a lovely take on Joni Mitchell’s “Ladies of the Canyon,” and a faithful cover of Blondie’s “(I’m Always Touched by Your) Presence, Dear” that might have made a good single. She also recorded a wonderfully lush version of The Sugarcubes’ “Mama,” which ended up on the 1995 all-female compilation Ain’t Nothin’ But a She Thing. Hearing Annie Lennox cover Bjork is quite a treat, indeed. All four of these cast-offs are certainly strong enough to have been included on the album itself.

Although Medusa didn’t receive the universal acclaim that Diva enjoyed, it was still generally well received, and it became a substantial commercial success. It reached #1 in the U.K. and Canada and #11 in America, going double-platinum in all three countries. Medusa was a Top 10 album all over Europe and in other parts of the world, and has sold millions of copies globally. Both “No More ‘I Love You’s” and “Whiter Shade of Pale” were included on her 2009 retrospective The Annie Lennox Collection.

Cover albums are notoriously hit and miss; even the best artists can sometimes stumble when straying from their original material and trying to reinvent somebody else’s. Lennox is a masterful interpreter of other artists’ tunes, getting to the heart of the songs and delivering one stunning vocal performance after another. Lennox imbues each of these songs her own distinct flavor. Even though the songs come from different eras and there is a vast stylistic diversity, the album is tightly cohesive. Medusa holds up remarkably well two decades since its release. For fans who are just beginning to discover Lennox thanks to her recent visibility, or for those casual fans who know the hits but haven’t taken the time to delve all the way into her albums, Medusa is a terrific collection that is due for reevaluation and appreciation;  and a nice deluxe reissue with a vinyl pressing would be most welcome.

Music writer for Metro Weekly. Contact at cgerard@metroweekly.com.
← Previous Story No Evidence of Disease: Cancer warriors use music as a weapon in their fight
Next Story → Perfume Genius: Essentials (Audio and Video)