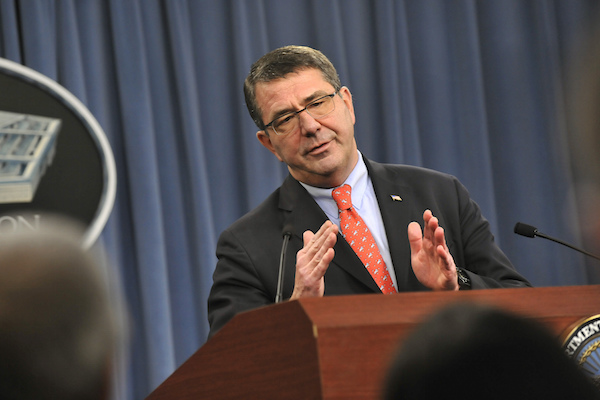 Ashton Carter was sworn-in Tuesday as President Barack Obama’s fourth secretary of Defense during a ceremony at the White House, assuming the top Pentagon spot at a time when LGBT-rights advocates continue to press the Obama administration to allow transgender military service.

Carter, who formerly served as deputy secretary of Defense, was nominated by Obama to replace outgoing Defense Secretary Chuck Hagel in December and confirmed by the Senate 95-5 last week. Although Hagel, a Vietnam veteran and the first former enlisted combat soldier to serve as Defense secretary, voiced his support for a review of the military’s longstanding ban on open transgender service, he never ordered such a review before departing the Pentagon.

In an interview that aired May 11, Hagel told Martha Raddatz of ABC News that the military’s transgender ban should be “continually reviewed” and stated he is open to such a review. “I go back to the bottom line — every qualified American who wants to serve our country should have an opportunity if they fit the qualifications and can do it,” he said. “This is an area that we’ve not defined enough.”

During a flight en route to Saudi Arabia a few days later, Hagel expanded upon his remarks, stating that the Pentagon should continue to evaluate the ban. “I’ve not asked for a specific task force,” he said. “I’ve not asked for a specific study. I would want to hear more from individuals who are close to this issue, know this issue, who I would value their judgment and their direction on.” On May 16, the White House signaled their support for such a review. “I would certainly point you to what Secretary Hagel said and we certainly support his efforts in this area,” then-White House press secretary Jay Carney said in response to questions from Metro Weekly.

Both the White House and Hagel expressed confidence that the change in leadership at the Pentagon would not hinder an order of the military’s transgender ban. During an interview with Stars and Stripes and Military Times last month, Hagel noted that the military “has been on the cutting edge of social change in this country since World War II.”

“I have confidence in the process and the system [and believe] that the transgender issue will be dealt with in a fair way,” he continued.

Despite that confidence, advocates have expressed concern with how slow the Pentagon has been to act more than nine months after such a dramatic shift in tone by Hagel and Obama administration on transgender military service. While gay, lesbian and bisexual Americans have been able to serve openly since the repeal of “Don’t Ask, Don’t Tell” (DADT) in September 2011, with no negative consequence, a medical regulatory ban still prohibits transgender military service. Unlike DADT, the ban is not a federal statute and the ability to lift it lies not with lawmakers on Capitol Hill, but leaders at the Pentagon. An estimated 15,500 transgender personnel currently serve in the armed forces.

But there appears reason to be hopeful as focus turns to Carter. In a Feb. 17 letter to Defense Department personnel, Carter wrote that for the Pentagon to win support from Americans for the necessary resources, “[W]e must show that we can make better use of every taxpayer dollar. That means a leaner organization, less overhead, and reforming our business and acquisition practices. It also means embracing the future – and embracing change. We must be open to change in order to operate effectively in an increasingly dynamic world; to keep pace with advances in technology; and to attract new generations of talented and dedicated Americans to our calling.”

Part of that change is expected to take form in the makeup of Carter’s staff. It is anticipated Eric Fanning, who is openly gay and currently serves as Under Secretary of the Air Force, will become Carter’s chief of staff, according to DefenseNews. Fanning has expressed his support for open transgender military service. Fanning’s boss, Air Force Secretary Deborah Lee James, has said the ban on open transgender service is likely to face review within the next year. In a December interview with USA TODAY, James stopped short of endorsing repeal of the transgender ban, but when asked whether she believes there is a military readiness reason why transgender people should not be allowed to serve, James responded, “From my point of view, anyone who is capable of accomplishing the job should be able to serve, so I wouldn’t be surprised if this comes under review.”

And earlier this week, USA TODAY reported on a draft memorandum that would change the Army’s discharge process for transgender troops. If adopted, the new policy being considered by the Army would make it so only the assistant secretary of the Army for personnel could make the decision to discharge soldiers who are transgender, rather than lower-level Army officers.

Ashley Broadway-Mack, president of the American Military Partner Association, said the report was a “positive indication that the military is now considering a more comprehensive review of transgender inclusion,” but they are still waiting for Carter to call for full inclusion.

Carter has not commented on the military’s transgender ban and was not asked about the issue during his Senate confirmation hearing.

“Good military leaders listen when their subordinates tell them what they need to fight and win,” stated Allyson Robinson, a former Army captain and director of policy for the LGBT military group SPARTA. “This week’s news that the Army is considering steps to retain transgender soldiers adds one more voice – Secretary [of the Army John] McHugh’s – to the chorus of commanders and other military officials calling for an update to these unworkable, 1970’s era policies. Secretary Carter needs to listen to them and order a top-down review. It’s the only way to get a policy that works for our service members, their families, and the people who lead them.”

Pentagon spokesperson Lt. Cmdr. Nate Christensen told Metro Weekly the Defense Department has also launched a “routine, periodic review of the Department’s medical accession policy,” but it is not the review of transgender military service the Pentagon has been pushed to order.

“We routinely review our policies to make sure they are accurate, up-to-date and reflect any necessary changes since the Department’s last policy review,” Christensen said. “The last review of this DODI was conducted in 2011. The current periodic review is expected to take between 12-18 months; it is not a specific review of the Department’s transgender policy.”

However, Robinson has very little confidence in the Pentagon’s “routine” review process. “If it were worth its salt, it would have brought these regulations up to date long ago,” Robinson said. “The ‘routine’ review process is what’s responsible for a policy that’s hurting our troops and confusing their commanders – one that’s decades behind our allies and out of step with practically every major medical body and every other government agency. Our military leaders must do better.”