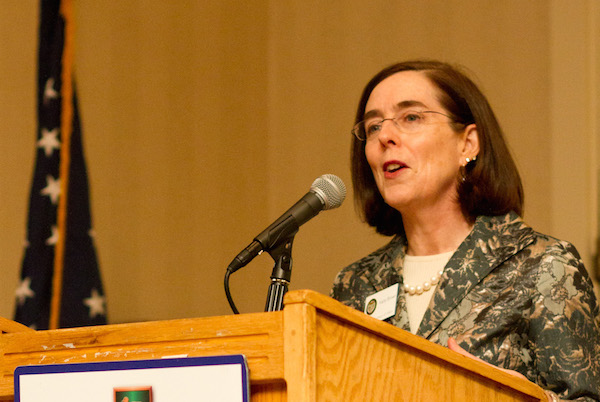 Kate Brown was sworn-in Wednesday morning as Oregon’s 38th governor, making history as the first out bisexual person to serve as governor in the United States.

Brown, who is bisexual, replaced embattled Democratic Gov. John Kitzhabe. Kitzhabe announced his resignation last week amid an ethics investigation involving the business dealings of his fiancée, Cylvia Hayes. The 54-year-old Brown served as Oregon’s Secretary of State and was first in line to replace Kitzhabe, who was elected to a fourth term in November. (Oregon has no lieutenant governor.) She was first elected Secretary of State in 2008 and reelected in 2012. Previously she served in Oregon’s House of Representatives and Senate.

“In order to move us forward the first order of business is to regain the confidence of the people,” Brown said during a brief inaugural address at the Oregon State Capitol. Brown vowed that neither she, her family or staff would seek or accept outside compensation from any source for work related to the business of Oregon.

Although Brown assumed the role as governor amid scandal and public disapproval of state government, the historic significance of her new role was not unforgotten.

“I am also proud that Oregon has again made history as a leader in equality, with Kate Brown now serving as the nation’s first governor from the lesbian, gay, bisexual, and transgender community,” Oregon House Speaker Tina Kotek (D) said in a statement.

According to Denis Dison, interim executive director of the Gay & Lesbian Victory Fund, Brown assuming the role as governor should make the entire LGBT community extremely proud. “More importantly for Oregonians, she’s a dedicated, passionate and impressive public servant who’s ready for this challenge,” Dison said in a statement. “We believe in Kate Brown and her ability to lead Oregon through this difficult moment.”

Former New Jersey Gov. Jim McGreevey (D) announced on Aug. 12, 2004 that he was gay and would resign as governor. No out LGBT person has ever been elected governor.