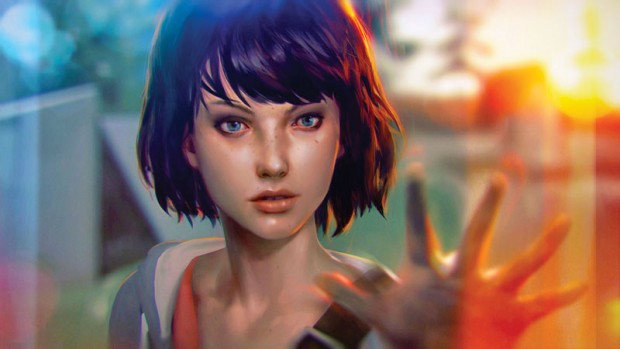 In the world of episodic games, one name stands above all else. TellTale Games have the art of multi-episode game narratives down to a fine art, from The Walking Dead to The Wolf Among Us — even a Game of Thrones adventure. Their influence over the episodic adventure genre is so great that it makes it easy to emulate their winning formula, but rather difficult to innovate upon it. It’s that desire to improve upon — or at least differ from — TellTale’s successes that seems to run through the heart of Life is Strange, a new, five-part series from French developer Dontnod Games and publisher Square Enix.

Set in an autumnal seaside town in Oregon, Life is Strange follows Max Caulfield during her first year at a prestigious academy, as she navigates the drama, crushes, backstabbing and homework that come with being eighteen. Oh, and she can also manipulate time, altering the world around her — this isn’t your typical, angst-ridden teen. Players assume control of Max as she first learns of her powers. Witness to a murder at her school, as Max reaches out to help she’s suddenly transported back to her seat in an earlier class. From here, she (and the player) take tentative steps into her time-altering abilities, before she succeeds in altering the future and preventing the murder from occurring.

Here, the world of Arcadia Bay opens up — albeit in tightly-controlled form — for you to work your way through the first episode, dubbed Chrysalis. And I’ll say this right now: it’s a sumptuously fashioned setting. Dripping in soft, Pacific sunshine, with glowing textures and a gentle art style, Max’s world is an attractive one indeed. Character models are rendered well — though a little more facial expression wouldn’t hurt — and environments are easy to navigate thanks to a broad color palette and deft animation. It sounds wonderful, too, thanks in part to the game’s delightfully appropriate indie soundtrack — in the game’s opening scenes Max walks through the school’s halls to Syd Matters’ To All of You and it seems crafted for that particular moment as Max puts her headphones in and blocks out the noise of school activity.

Voice acting, of which you’ll hear a lot due to the game’s focus on story and characterization, is less stellar. Max, played by Hannah Telle, sounds authentic. Her inner-monologues, commenting on her fellow students or her newfound abilities, sound as real as if it were an actual eighteen-year-old narrating their life. Hearing Max’s thoughts as she navigates environments and looks at items or people was one of the highlights of my time in her world — in particular her comments on photography. Max is a photography student, with a deep passion for the craft, and that translates beautifully to the player. I have little interest in anything beyond taking photos on my phone, but Life is Strange still managed to make me care about photography almost as much as Max does. When her beloved analogue camera is broken at one point in the game, it’s tough not to feel sorry for her, so emotive is her voice, her pain clearly audible.

“The palpable tension is enough to make you wince, so real can the dialogue be between certain characters.”

The rest of the cast is somewhat imbalanced. Max’s best friend, Chloe, whom she’s reunited with after Max left Arcadia Bay five years prior with her parents to live in Seattle, is your stereotypical rebellious teen — with all of the swearing, pot-smoking and stepdad hating that entails. Still, when she and Max first reunite, and the former asks the latter why she refrained from contacting her at all while in Seattle, the palpable tension between the two is enough to make you wince, so real can the dialogue be between certain characters. I say “certain” because most of the residents of Arcadia Bay are, so far, broad stereotypes. There’s the school’s security guard, who’s also Chloe’s stepdad, a former army veteran who treats everyone like a soldier and a suspect. There’s the typical bullying, bitchy queen bee, who commands her fellow students around. Max’s main friend is a science geek who also has a painfully obvious crush on her (wait for the moment she awkwardly rebuffs his attempt at a hug — it’s brutal). Of course, the school’s principal only cares about keeping up appearances for his prestigious academy — his response to a student threatening another with a gun is lackadaisical at best — and the janitor is your typical weirdo. There are jocks, skater kids, quiet bookish types and goth/punk students. Every teen archetype is found here — and their phrases are more often awkward than not. If you’re expecting Aaron Sorkin levels of dialogue, you’ll be disappointed. And, what’s more, lip-syncing is atrocious. It’s as if no one at Dontnod bothered to check that the audio and the characters’ lip movements matched up — it didn’t entirely distract from my time with the game, but it was an irritant all the same.

That said, I was still enraptured with Life is Strange. A budget Heavy Rain of sorts, this is less a game and more an engrossing narrative that you play through, rather than read or watch in a cinema. Though this episode is mostly establishing the characters and the events which will later unfold, it does a fantastic job of making you want more of Max’s world. The story itself is full of intrigue. There’s the sci-fi element of Max’s time travel: where did it come from, is it all an allegory, what will the impact be of making so many changes? There’s also the sub-story of a missing student, Rachel, whose disappearance was sudden and suspect. And then, at the end of the game, the reveal of a destructive force on its way to ruin the lives of Arcadia Bay’s residents. The residents themselves are, like any good mystery, all equally guilty of something: the creepy janitor, the anger-filled security guard, the spoiled rich kid, the jealous queen bee, the quiet religious girl, the preoccupied principal, the dumb jock. Whodunnit, and what was “it”? Unlocking their various stories is one thing I’m looking forward to over the next four episodes. 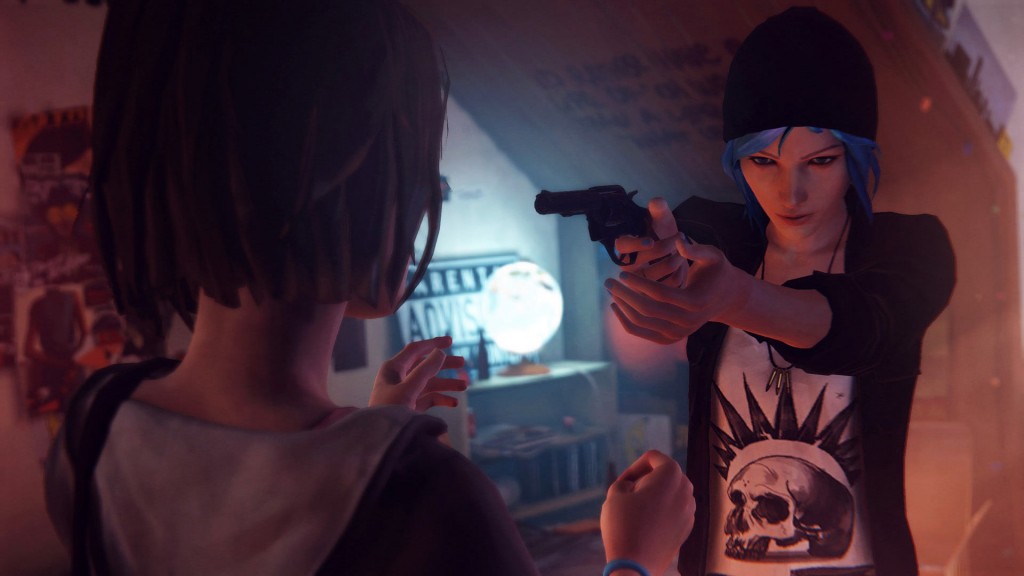 What’s more, the game’s central conceit — being able to rewind and alter time — offers a new mechanic to the genre, and it’s a powerful one. Whereas TellTale’s games require you to make a quick decision and live with its consequences, Life is Strange offers a mulligan of sorts. Many of the decisions the player makes can be reversed, and that presents an interesting level of self-debate. If you’re not forced to make a quick decision, can you still be as sure of your resulting choice?

In one instance, after stumbling across the security guard harassing a student, I had the option to intervene or could silently watch and photograph the exchange. I instantly chose to photograph it, and watched the scene unfold. However, the student in question berated me for not helping, and Max questioned whether she’d made the right choice. I was sure that having the photo would help at a later date in the narrative — it was evidence of harassment, right? — but having the option to intervene, and see how it would play out, I did. This time, Max rushed in and broke up the fight, only now, though the student was happy, the security guard threatened Max instead. Once I left this area, my choice was final. I agonized over it — intervene, and have the student be happy in the short term but potentially put Max in jeopardy later, or look to the long term and take the photo but risk an already depressed student from hating Max. I was so confident when I first chose to take the photo, but after seeing both scenarios through I ultimately chose to intervene — and even now I’m not sure if that was the correct decision. Life is Strange may seem to hamper character progression by letting you play both sides of the coin, but in fact, that glimpse of multiple conclusions only makes the choice harder — there’s no “right” option, at least not in the short term. You’ll have to wait for the story to progress to realize the full weight of your actions.

“That glimpse of multiple conclusions only makes the choice harder — there’s no ‘right’ option, at least not in the short term.”

Time-travel features throughout the game. If you find an item that Max can learn from, she retains that item or knowledge learned from it while reversing time. Say, for instance, you rummage through another student’s trash looking for something and they catch you? Rewind back and they’ll never know — but Max will hold on to whatever she gleaned from her search. It can also help progression. If your path is blocked by a falling item, rewind time and move past the point before the item falls. Or, as yet another example, if you talk to someone and learn something during the conversation, it can then be applied at an earlier point if you rewind. At the start of the game, Max’s teacher asks her about daguerreotypes. She has no idea what they are, and is admonished, but another student answers. Now, do you accept the criticism, or do you rewind time and answer correctly, removing the praise from the other student? These are the possibilities presented by the game’s mechanics.

Unfortunately, they remain possibilities because, at least for this first episode, linearity is a problem. Many conversations are only slightly impacted by reversing time, and the game itself won’t take more than a couple hours, even with exploration of every environment. Outside of a half dozen major choices, Max’s story is so far a limited one, and we won’t learn the impact of her choices until later episodes. Some decisions, too, are baffling. I was given the option to draw in the dirt of an RV, and the game warned “This action will have consequences.” What on earth could they possibly be?

Perhaps, though, that question is what makes Life is Strange so intriguing. After spending so much time on each major decision — and some of the minor ones, such as choosing to read the pregnancy test in a room in the girl’s dorm — I’m ready for the next episode in Max’s story. Dontnod are spreading them out, with six weeks between releases, annoying for someone as impatient as I am. I’d rather they’d crafted an entire game, like Heavy Rain, with a lengthy, contained narrative, but if each subsequent episode expands upon the choices made and further utilizes its intriguing time-travel mechanic, I’ll keep coming back for more of Arcadia Bay and its inhabitants. Life may be strange, but it’s also utterly compelling.