Attorneys chosen to argue for marriage equality before the Supreme Court 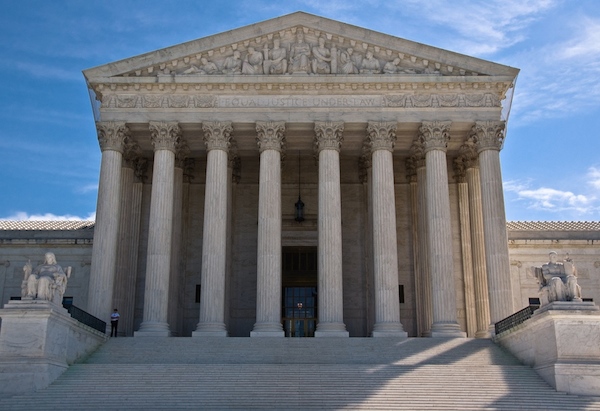 The attorneys who will present oral arguments next month to the Supreme Court justices arguing state bans on same-sex marriage are unconstitutional have been revealed.

The famed lesbian attorney Mary Bonauto will present oral arguments in the first question before the justices: Does the Fourteenth Amendment require a state to license a marriage between two people of the same sex?

Considered a pioneer of the marriage-equality movement, Bonauto has served as director of the Civil Rights Project at Gay & Lesbian Advocates & Defenders (GLAD) since 1990. Her successful litigation of a 1999 case in Vermont led that state to become the first in the nation to enact civil unions for same-sex couples. She served as lead counsel in Goodridge v. Department of Public Health, the case that made Massachusetts the first state to recognize same-sex couples’ right to marry in 2004. She also served as co-counsel in the case that legalized same-sex marriage in Connecticut and led GLAD’s federal challenge to the Defense of Marriage Act (DOMA). Former Rep. Barney Frank (D-Mass.) has frequently referred to her as the LGBT-rights movement’s Thurgood Marshall.

Douglas Hallward-Driemeier will address the second question presented by the combined marriage-equality cases: Does the Fourteenth Amendment require a state to recognize a marriage between two people of the same sex when their marriage was lawfully licensed and performed out-of-state? A partner at the D.C. law firm Ropes & Gray, Hallward-Driemeier leads his firm’s appellate and Supreme Court practice. He served as an assistant to the solicitor general from 2004 to 2009 and has argued before the Supreme Court 13 times and every federal court of appeals.

“I’m humbled to be standing up for the petitioners from Kentucky and Michigan who seek the freedom to marry, along with the Michigan team of Carole Stanyar, Dana Nessel, Ken Mogill, and Robert Sedler, and with support from the other legal teams,” Bonauto said in a statement. “The road that we’ve all travelled to get here has been built by so many people who believe that marriage is a fundamental right. Same-sex couples should not be excluded from the joy, the security, and the full citizenship signified by that institution.”

“It is an incredible honor to represent these devoted couples, who have already been lawfully married and established new families, in arguing to vindicate their right to have the states respect their marriages,” Hallward-Driemeier said in a statement. “The plaintiffs in these cases reflect the broad array of couples, from those together for three decades to those just starting young families, and the many instances in which married couples must cross state lines to work for a new employer, give birth at the nearest hospital, or seek out new opportunities. These couples deserve the same respect and stability that states grant other married couples and their families throughout every phase of life.”

In November, the 6th Circuit Court of Appeals upheld same-sex marriages bans in the four states — Kentucky, Ohio, Tennessee and Michigan — breaking with other federal appeals courts that have considered the issue and creating a split among the circuit courts.

On April 28, the Supreme Court is scheduled to hear a total of two and a half hours of oral arguments on the two questions posed by the combined cases. Arguing on behalf of the states defending bans on same-sex marriage will be former Michigan Solicitor General John Bursch. Tennessee Associate Solicitor General Joseph Whalen will argue on behalf of states defending bans on recognition of same-sex marriages performed in other jurisdictions. A ruling is expected in late June.

“I believe the Court will give us a fair hearing,” Bonauto continued, “and I look forward to the day when all LGBT Americans will be able to marry the person they love.”