A federal judge struck down Nebraska’s ban on same-sex marriage in a decision handed down Monday.

“Nebraska’s ‘Defense of Marriage’ Constitutional Amendment, Section 29, is an unabashedly gender-specific infringement of the equal rights of its citizens,” Bataillon wrote. “The State primarily offers as its rational basis for this gender-specific discrimination the encouragement of biological family units. The essence of this rationale has been rejected by most courts and by no less than the Supreme Court. With the advent of modern science and modern adoption laws, same sex couples can and do responsibly raise children. Unfortunately, this law inhibits their commendable efforts.”

Bataillon found the same-sex couples who filed the lawsuit will likely prevail on their merits of their claim and that later this year the U.S. Supreme Court “will ultimately endorse, for one reason or another,” decisions from multiple circuit courts striking down bans on same-sex marriage. Bataillon ordered the state to cease enforcing the marriage ban, but stayed his decision until March 9 at 8 a.m. local time. Nebraska Attorney General Doug Peterson will appeal the ruling to the 8th Circuit Court of Appeals. 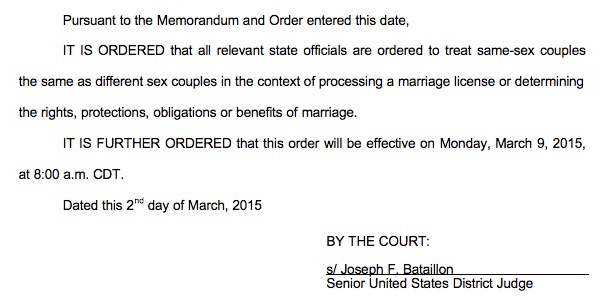 Bataillon previously struck down Nebraska’s same-sex marriage ban in 2005, but his ruling was reversed by the 8th Circuit Court of Appeals in 2006, according to the Associated Press.

Nebraska was one of the last states where a federal judge had not yet ruled against an existing ban on same-sex marriage. Litigation is still pending in Georgia and North Dakota.

“For the majority of married couples, those without children in the home, marriage is a legal and emotional commitment to the welfare of their partner,” Bataillon wrote. “The State clearly has the right to encourage couples to marry and provide support for one another. However, those laws must be enforced equally and without respect to gender.”