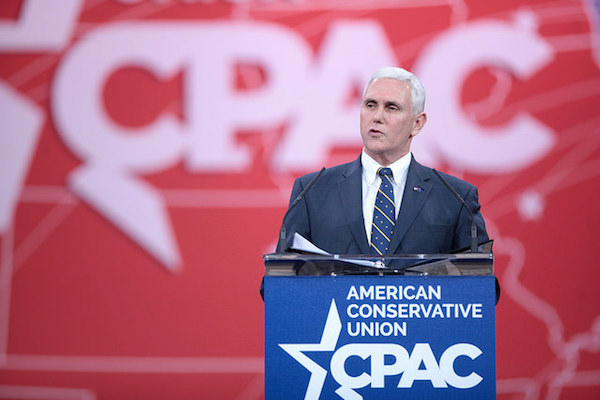 During a private ceremony, Pence signed the Religious Freedom Restoration Act, saying in a statement that he did so because he supports “the freedom of religion for every Hoosier of every faith.”

“The Constitution of the United States and the Indiana Constitution both provide strong recognition of the freedom of religion but today, many people of faith feel their religious liberty is under attack by government action,” Pence continued.

I signed SEA 101 today to ensure religious liberty is fully protected under IN law http://t.co/vCOASZBZnH pic.twitter.com/CMFJh6aLDx

Although Pence has said all along he would sign the legislation into law, opponents of the bill — which has been described as a license to discriminate in the name of faith against LGBT people — launched a desperate veto campaign after lawmakers sent the bill to Pence’s desk earlier this week. Advocates argue the new law will allow business owners to discriminate against LGBT people by citing their religious beliefs.

Pence, however, said Thursday the bill will do no such thing. “This bill is not about discrimination, and if I thought it legalized discrimination in any way in Indiana, I would have vetoed it,” Pence said in a statement. “In fact, it does not even apply to disputes between private parties unless government action is involved. For more than twenty years, the federal Religious Freedom Restoration Act has never undermined our nation’s anti-discrimination laws, and it will not in Indiana.”

The Indiana House of Representatives approved the bill 63-31 on Monday and the Indiana Senate concurred with the House version of the bill with a 40-10 vote. The legislation is modeled on the federal Religious Freedom Restoration Act passed by Congress and signed by President Bill Clinton in 1993 and part of a larger backlash taking place in states across the nation. As marriage equality and LGBT nondiscrimination protections have spread, there has been a concerted effort to erode those gains.

“The timing of this legislation is important to understanding its intent: The bill was introduced as a backlash reaction to achieving marriage equality for same-sex couples in Indiana,” said Jane Henegar, executive director of the ACLU of Indiana, in a statement.

While Pence was unwavering in his support for the bill, what negative economic impacts his decision to sign the bill could have for the state remains to be seen. Among those urging Pence to veto the legislation during the eleventh hour were organizers of Gen Con, a gaming convention that attracted 56,000 people to the Indiana Convention Center last year and has $50 million annual economic impact. Adrian Swartout, owner and CEO of Gen Con LLC, threatened to move the conference elsewhere if the bill was signed into law, according to The Indianapolis Star. Indianapolis Mayor Greg Ballard, a Republican, also said the bill’s approval sends the “wrong signal” for the state and city.

“The Indiana General Assembly and Governor have sent a dangerous and discriminatory message with this new law,” said Sarah Warbelow, legal director for the Human Rights Campaign, in a statement. “They’ve basically said, as long as your religion tells you to, it’s ok to discriminate against people despite what the law says. This new law hurts the reputation of Indiana and will have unacceptable implications for LGBT people and other minorities throughout the state. Astoundingly, Indiana representatives ignored the warnings of businesses and fair-minded Hoosiers, and now business owners and corporations are forced to consider other options when looking at states to invest in.”

Indeed, soon after Pence signed the law, Marc Benioff, the CEO and founder of the global cloud computing company Salesforce.com, announced on Twitter he is canceling all programs that require customers or employees to travel to Indiana.

The Democratic National Committee was quick to criticize Pence, describing the “damaging bill” as turning back the clock on progress made for LGBT equality. “By signing this blatantly discriminatory bill that will only drive business out of his state, Pence reminds every Hoosier and every American that the Republican Party is more focused on its ideological social agenda than it is on expanding opportunity for the middle class and growing our economy,” said Ray Buckley, vice chair of the DNC. “And the fact is, Republican presidential hopeful Mike Pence is far from alone on this issue. Jeb Bush, Rand Paul, Ted Cruz, and Marco Rubio have all voiced support for similar legislation and policies that would give businesses the right to refuse services to LGBT people. Just imagine if these politicians had the chance to bring this dangerous and divisive agenda to the White House.”

But Pence continues to insist the new law will not impact Indiana’s reputation for tolerance. “Indiana is rightly celebrated for the hospitality, generosity, tolerance, and values of our people, and that will never change,” he said Thursday. “Faith and religion are important values to millions of Hoosiers and with the passage of this legislation, we ensure that Indiana will continue to be a place where we respect freedom of religion and make certain that government action will always be subject to the highest level of scrutiny that respects the religious beliefs of every Hoosier of every faith.”

Katie Blair, campaign manager for Freedom Indiana, said that despite all their efforts, Pence and lawmakers simply didn’t listen. “They ignored huge job creators and small businesses. They ignored churches and other institutions of faith. They dismissed the idea that a license to discriminate would make us unappealing to visitors and potential residents,” Blair said in a statement. “We’re proud of everything that was done to sound the alarm on this dangerous bill, and we’ll do everything we can to make it clear that our state is not the kind of backward place this law makes us look like. But the damage has been done, and it’s a real shame.”