“I had an email from my friend Jonathan Groff when I got home from my reading tonight at Books Inc. telling me that HBO announced today that it was canceling Looking but that it would film a movie of the series to air in order to wrap things up instead of leaving things hanging.” 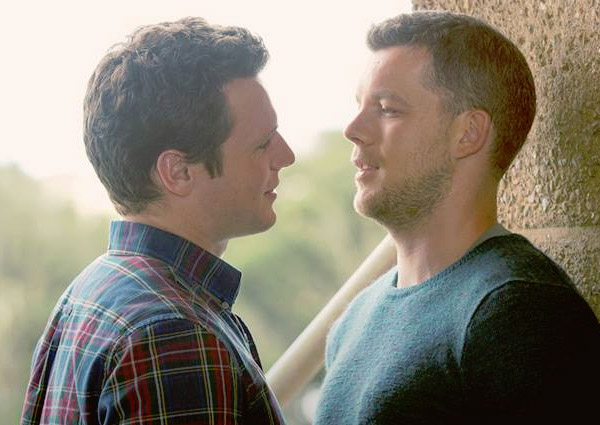 UPDATE: Since this post was written, HBO has officially cancelled Looking.

“After two years of following Patrick and his tight-knit group of friends as they explored San Francisco in search of love and lasting relationships, HBO will present the final chapter of their journey as a special. We look forward to sharing this adventure with the shows loyal fans,” reports TVLine.

Yes it's true, we'll be doing a movie instead of a third season. Thanks for all the love and support! Final chapter yet to come…

According to another recent report from TVLine, the show’s creator, Michael Lannan, had hoped that Looking would be renewed for a third season, saying, “I’m cautiously optimistic,” and that “[HBO realizes] there are other things more important than numbers.”

The half-hour show just ended its second season on Sunday night. Its plot primarily centered around the dating habits and aspirations of three gay men living in San Francisco. The creators’ approach was meant to be light and somewhat more realistic than other gay fare — shows like Russell T. Davies’ Queer as Folk and the upcoming Logo offerings, Cucumber and Banana, also from Davies.

Looking had been generating some buzz over the past couple of weeks as fans feared that it would be canceled due to low ratings.  An online petition was created, open letters were posted, opinions were offered. The show did have some critics. Slate’s J. Bryan Lowder called it “boring” last year, while IndieWire blogger Matt Brennan claimed it went “from boring to brilliant.”

According to SeriesFinale.com, the show’s second season averaged a weakened 240,000 viewership per episode. The first season of Looking reportedly had a 380,000 viewership, and also a stronger draw among the key demographic of viewers aged 18-49.

Looking starred Murray Bartlett as middle-aged restauranteur, Dom Basaluzzo, Frankie J. Alvarez as Agustin Lanuez, an artist in recovery, and Jonathan Groff as Patrick Murray, a videogame developer who fell in love with his British boss, portrayed by Russell Tovey. Groff is also known to many TV watchers as Jesse St. James of Glee, which ended this week, too, after six seasons.

Tovey recently began promoting his new BBC2 show, Banished, where he plays a prisoner in the early days of Australian colonization. The out, gay actor generated headlines earlier this month while discussing his muscled physique. Tovey made a seemingly unfortunate remark about the challenges of effeminate gay men as actors. He later offered an apology.

Fans of Looking can find more about the show on the official HBO page, on the Looking Facebook page or Twitter feed, or hear interviews with the creators and stars on SoundCloud.

Cucumber and Banana begin airing in the U.S. on April 13 on Logo.

Banished is currently airing in the UK on BBC2.