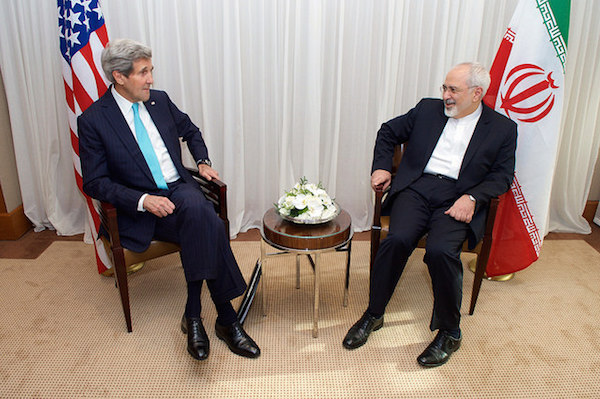 Log Cabin Republicans are accusing the Obama administration of ignoring Iran’s human rights abuses against gay people and other minorities in a new ad unveiled Friday.

The ad, scheduled to run in Monday’s edition of Roll Call, criticizes Secretary of State John Kerry and the Obama administration for “contemplating rewarding a nation guilty of terrible human rights abuses against gays, Jews, and women by lifting sanctions.” The Obama administration is currently engaged in negotiations with Iran over the country’s nuclear program.

“Human rights can’t be ignored in these negotiations,” the ad reads, which directly addresses Kerry and states the negotiations over sanctions are about more than nukes.

“It is absolutely appalling that the negotiations taking place right now between the United States and the Iranian government have avoided any serious discussion of the horrendous human rights abuses taking place in Iran,” said Gregory T. Angelo, executive director of Log Cabin Republicans, in a statement. “Given the reluctance of Democratic gay rights activists to ever level any criticism whatsoever against the Obama administration, and the absence of the brutal treatment of gays as well as women and Jews from United States diplomacy in this matter, it is incumbent upon Log Cabin Republicans to draw attention to this important issue. The deadline for a deal is looming, but it is not too late; Secretary Kerry can still make human rights an important part of these highly consequential negotiations. Anything that does not is a bad deal.”

Negotiations with Iran over their nuclear program have proved divisive between Congress and the White House, particularly after House Speaker John Boehner invited Israeli Prime Minister Benjamin Netanyahu to address a joint session of Congress earlier this month without consulting the White House. Netanyahu, a critic of the Obama administration’s negotiations with Iran, won reelection earlier this week.

According to Angelo, Sen. Mark Kirk (R-Ill.) and Rep. Ileana Ros-Lehtinen (R-Fl.) received advanced copies of the ad and expressed their support for its message. While some on Capitol Hill have called for more sanctions against Iran, the President Barack Obama and members of his administration have insisted such sanctions would thwart ongoing negotiations.

“As the Obama administration continues to negotiate a weak nuclear deal, it is important to draw attention to Iran’s atrocious human rights record and educate the public on the brutality of this murderous regime,” Ros-Lehtinen said in a statement to Metro Weekly.