Ori and the Blind Forest (Review) 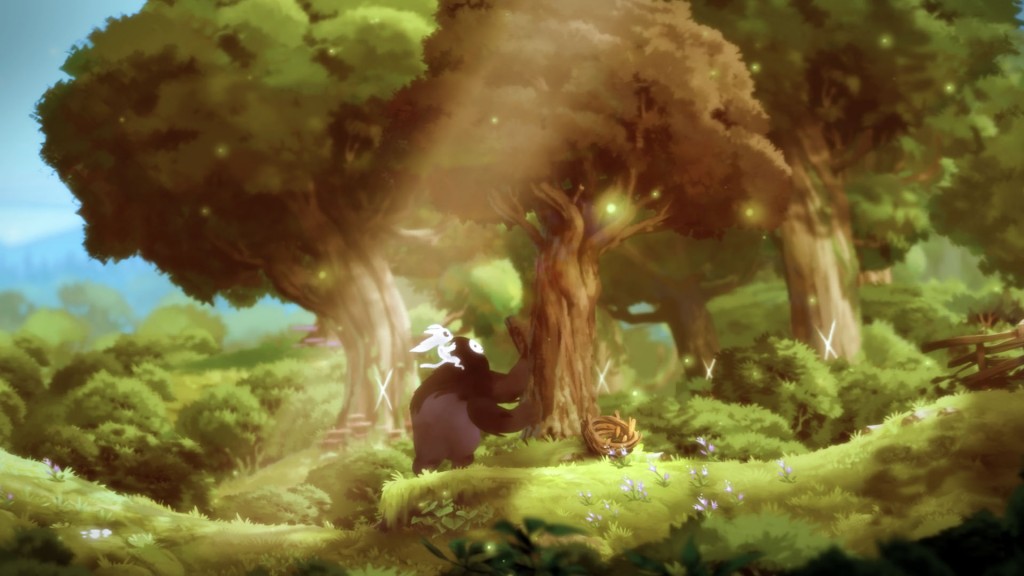 Gaming is a medium rife with tropes and recycled ideas. If a particular style, or method, or setting is proven effective, it will be repeated — almost ad nauseum — in countless other titles. Nowhere is this more apparent than in the two-dimensional platforming genre (with first person shooters a close second). After years of jumping on platforms and bashing enemies, we’ve seen it all — which makes it all the more special when a title takes those conventions and turns them into something as fastidiously crafted and beautifully enjoyable as Ori and the Blind Forest.

Crafted by freshman developer Moon Studios, it’s a Metroidvania platformer, which in layman’s term means you’ll start with a limited skill set and be tasked with exploring and upgrading your character over the course of the game’s duration. Again, this isn’t a new concept — hence the name, a reference to Metroid and Castlevania, both considered classic archetypes of the various gameplay elements employed. Moving in just two planes — up, down, left and right — any hope of originality seems false, given the thousands of other titles that employ such a mechanic.

Any yet, that sense of originality is precisely what Moon Studios seems to have created here. Ori and the Blind Forest enraptures in a way I haven’t experienced for some time — it’s a platformer that stretches every inch of its limited movement, interwoven with a gorgeously depicted narrative and an achingly beautiful world to create an experience that, while clearly drawing from several sources, manages to feel fresh and modern. 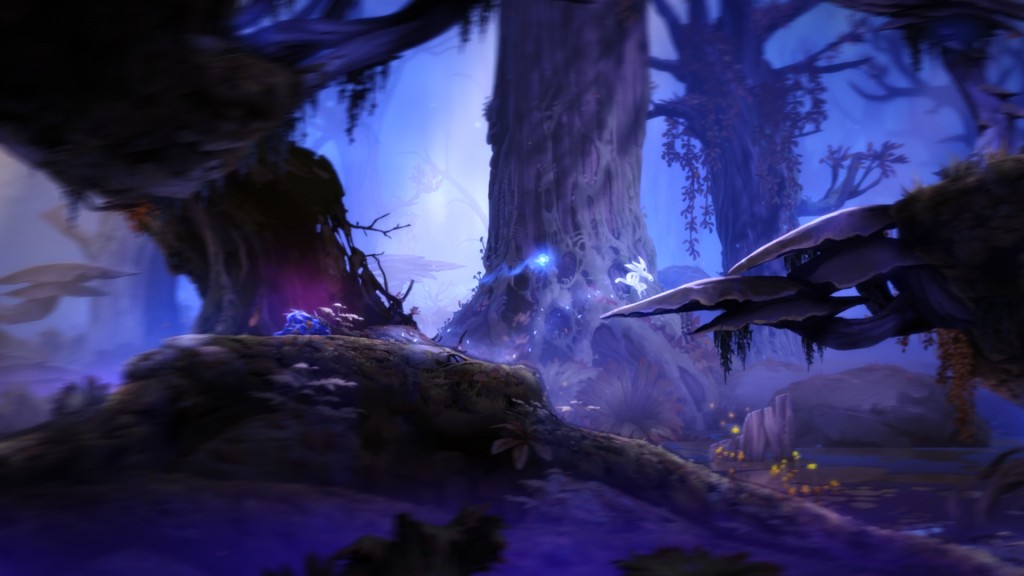 First, that story. If you’ve ever watched Disney Pixar’s Up, the flawless opening scene is essentially recreated in playable form for Ori’s prologue. Players will assume control of Ori, a cat-like white guardian spirit who fell from the Spirit Tree, only to be adopted by Naru, a bearish creature with no children of her own. You’ll frolic through a wonderful forest scene with Naru, as mother and child happily play together. After an apocalyptic event, which sees the Spirit Tree drained of the power it uses to maintain the world, Ori is left alone and forced to start exploring his world.

It’s here where the real gameplay starts. Unsurprisingly, Ori is far from the kickass destroyer of ne’er-do-wells he needs to be. In fact, the only ability you’ll have in the games opening moments is jumping over obstacles. If it seems oddly crippling to have such limited interaction at the start of the game, it’s for a purpose — to experience Ori at his least capable only serves to better exemplify the journey you’ll take him on over the course of the game’s 5-hour length.

While navigating through the world, which is infected with evil creatures, insidious fungi and barbed plants — all of which seem hell-bent on killing poor Ori — you’ll come across Sein, a fiery ball of light. Sein convinces Ori that he must travel to and restore the Spirit Tree, in order to save the forest from further destruction. Here, you’ll unlock Ori’s first ability: attacking enemies. Sein and Ori form a crime-fighting duo of sorts — Ori handles the platforming and maneuvering, while Sein hovers alongside and dispatches enemies. It serves two purposes: it keeps Ori “pure” in the sense that he isn’t the one actively fighting, while also making for more fluid combat. With Sein in charging of throwing balls of hot light at oversized frogs and spiders and acid-belching slugs, Ori’s movements are never interrupted. If you’re midway through a jump, or clambering up a wall, you won’t have to pause to attack. Keep bashing X, and Sein will handle anything in your way. 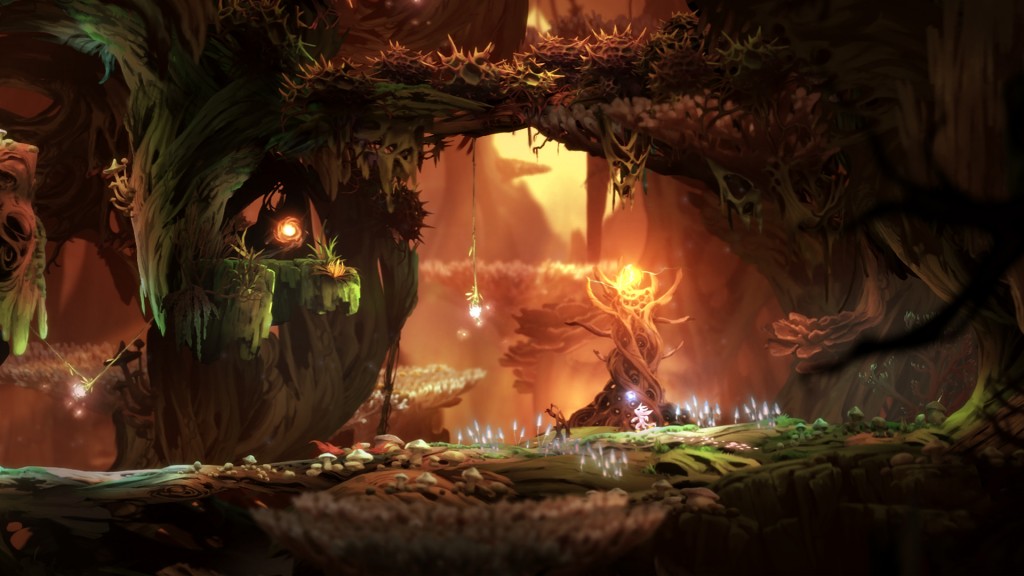 Indeed, it could almost seem overly simplistic at first. Ori can climb walls by repeatedly jumping up them, but he’s limited to one slightly long jump elsewhere. Sein is limited to just two balls of fire at a time. Encounters with enemies don’t require targeting, instead Ori merely has to be near them, at which point players will start tapping X to kill them while dodging any projectiles or melee attacks. Don’t be fooled, however, as things get much deeper as you progress. Ori is able to absorb the knowledge of other spirit lights, which have died and left behind miniature spirit trees in their place. Through these, Ori’s skills expand to double jump (I can’t intimate how freeing it felt to finally unlock this), the ability to slam down onto enemies, the ability to break rocks and other blockades, a charged attack that damages any enemies near Ori, as well as an ability known as Bash.

Bash is a game-changer. Literally. Ori can use it to lock on to enemies, their projectiles, or falling objects such as rocks and balls of fire. He can then fire himself in any direction, with the object or enemy being flung in the opposite direction. It unlocks a verticality to gameplay that previously relied on Ori climbing walls — and even then, only to a point. Locking on to something and flinging yourself through the air, or up to secret ledges, or beyond danger points, is a genius method of both travel and waging battle. If a spider, for instance, continues to spit poisonous globs at you, lock on with Bash and send it back into its face. If birds won’t stop swooping and pecking at you, lock on and throw yourself into the air, where you can do battle on your own terms. When Ori unlocks the ability to power jump, and picks up a feather that enables a gliding function, combining all three into movement and attacks makes the game feel worlds away from Ori’s initial state of managing a single jump and nothing more.

You’ll gain most of your powers by playing Ori’s story, but to really increase his abilities, you’ll have to explore — and it’s intensely rewarding. It helps that Ori’s world is stunning, drawing on inspiration from various animated sources, with the end result looking like a (rather beautifully animated) children’s book come to life. The various areas of Ori’s world each have their own distinct style, from the browns and greens of the swamp, to the reds and oranges of the lava-filled mountain, to the deep purples of the dark woods and the vibrant blues and greens of the forest. The art style, on both characters, objects and backgrounds, is gorgeously rendered. If there are echoes of recent Rayman games or Child of Light, that’s only a good thing. 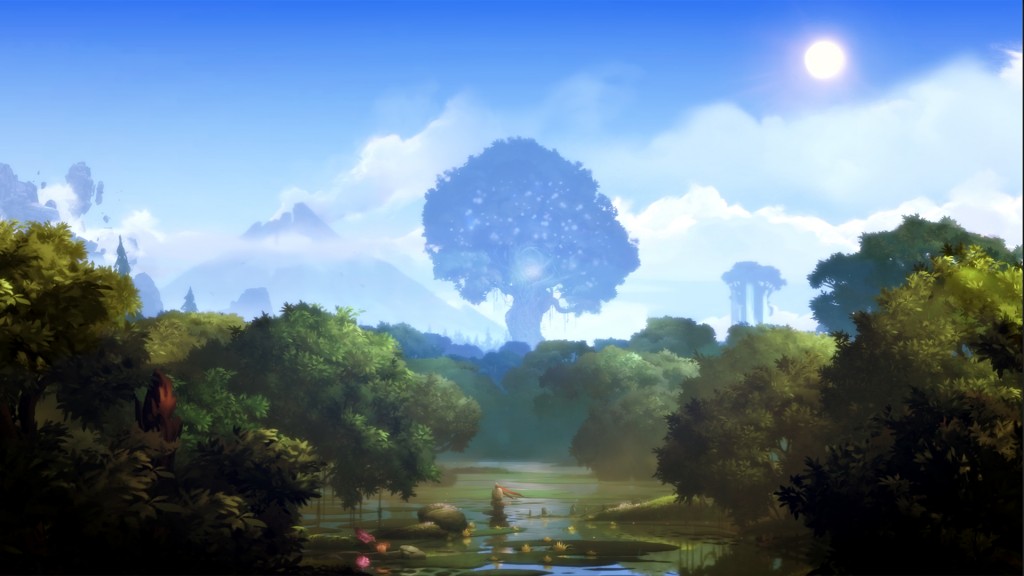 Scattered around this beautiful world are dozens of collectible items. Of course, it wouldn’t be a good platformer without collectibles, and Ori rewards your treasure-hunting with upgrades. Collecting spirit light, gained from vanquishing foes or finding special ability orbs, unlocks abilities, including more advanced and powerful attacks, a triple jump, the ability to breathe underwater, or even markers for other pickups to appear on your map. I became obsessed with combing every inch of every area, seeking out life orbs to unlock additional health for Ori, or energy orbs to grant more charged attacks and save points. Yes, energy for save points.

Ori doesn’t utilize checkpointing — at least, not for the majority of gameplay. Important events will grant a save, but for the most part players are left to their own devices. In practice, it’s an incredibly smart system. Smash energy crystals to gain their power and you can then form a Soul Link, which will allow you to save the game and access Ori’s ability tree. If you come to a particularly challenging section, save right before it — or, at various points during it — and you won’t have to worry about a lengthy traipse back from a distant save point should you die. However, be warned: get too cocky, or too forgetful, and it’ll punish you. More than once I found myself thrown back to the other side of the map — and it’s a huge map — because I’d either forgotten to save or I felt Ori was powerful enough that I wouldn’t die as easily. Lesson learned.

In terms of difficulty, you won’t find Ori too challenging, at least for the most part. Many of its areas require thought and planning, as you navigate worlds and complete puzzles, or hunt for collectibles. Enemies can be tough — particularly those that shoot beams and killed me every… single… time — but most are easily dispatched. Similarly, if you die it’ll more than likely be a case of your own incompetence than a failure on Ori’s part. The controls are tight, with a good balance between floatiness and accuracy letting you place Ori wherever you need him to be. That said, difficulty spikes — dramatically so — during the game’s three “boss levels.” There are no bosses in Ori, per se, but there are three tasks he must complete to help the Spirit Tree. These culminate in three crushingly hard special levels which mix vertical and horizontal gameplay and will be the closest you’ll come to throwing your controller at the TV. The first, a vertical climb through a giant tree as water rushes up beneath you, was almost enough to turn me away from the game. When I finally conquered it, though, that rush of adrenaline was more than enough to keep me going. These sections, it seems, almost require multiple deaths in order that players learn a set routine. They demand perfect platforming, and if you don’t deliver you’ll be drowned, burned, crushed, spiked or generally murdered. 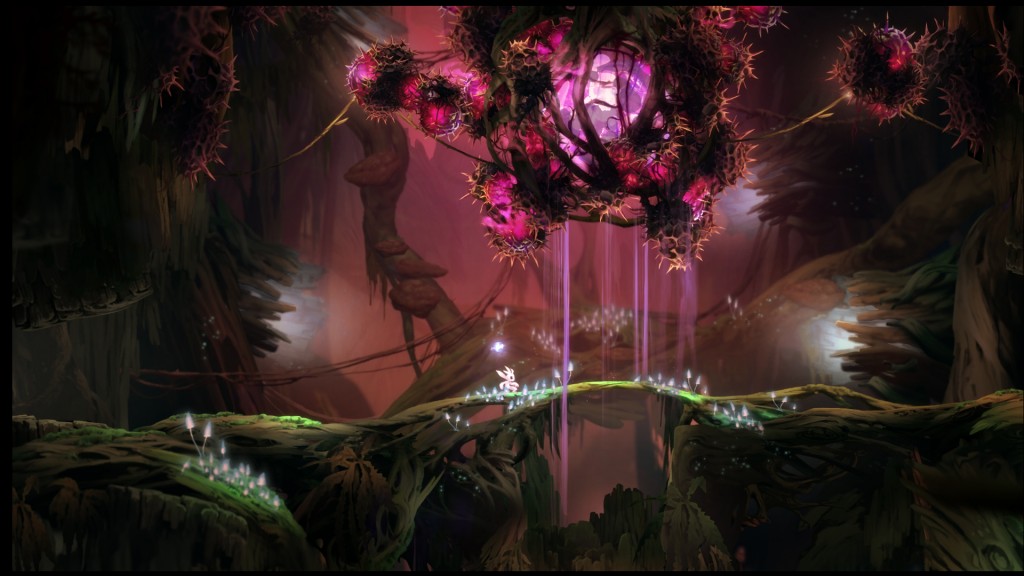 I haven’t even touched on arguably one of Ori’s greatest strengths: its wonderful score. Cutscenes are narrated in a made-up language, which only adds to the fantasy element, and audio such as Ori’s yelps and exertions are nicely captured. However, Gareth Coker’s score for the game is sublime. Every environment has a unique feel, thanks in part to the music accompanying it. Those tough end-stage levels are dramatically raucous. Cutscenes are underscored with appropriately emotive swells. Music is as much a part of the game as its art style and gameplay, and is utilized to incredible effect. The soundtrack is available to buy and I’d urge that you do so.

Overall, I’m more than a little in love with Ori and the Blind Forest. I’ve completed most of the game in two playthroughs — though, I won’t be getting the achievements for finishing in under three hours (I’m not that competent at gaming) or without dying (I finished my first playthrough with 300 deaths). From that emotional opening scene, to the game’s closing — both of which had tears stinging my eyes — it’s a beautiful, exciting, gloriously fresh experience. If this is what Moon Studios can do for a 2D platformer, I can’t wait to see what they create next. As for Ori, if you’re wavering over whether to get it, I’ll state this: It’s twenty dollars. Yes, twenty. It terms of enjoyment factor, it’s easily worth twice that amount. Buy it. Now.

Ori and the Blind Forest is available for Xbox One and PC.