Sen. Barbara Mikulski will not run for a sixth term

By John Riley on March 2, 2015 @JohnAndresRiley 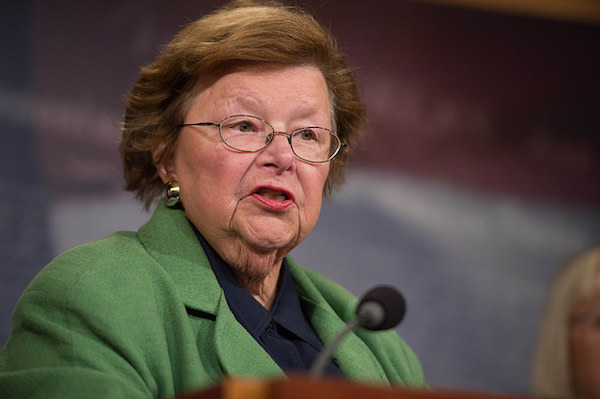 U.S. Senator Barbara Mikulski (D-Md.), the Free State’s senior senator and the longest-serving female in the upper chamber, announced at a Monday morning press conference that she would not seek a sixth term when her seat is up for re-election in 2016.

A longtime ally of the LGBT community, Mikulski has served in Congress since 1977, first winning election to the U.S. House of Representatives and later winning an open U.S. Senate seat during the 1986 midterm election, becoming the first Democratic female senator elected in her own right.

Speaking at the Inn at Henderson’s Wharf in Baltimore’s Fells Point neighborhood at 11 a.m., Mikulski assumed the populist tone and feisty attitude for which she has been known since first being elected to Congress, seeking to portray herself as a fighter for the people of Maryland. Throughout the press conference, Mikulski repeated the same refrain, stressing that her priorities over the next two years were to fight for the people of Maryland, hoping to help them “not just get by, but get ahead.”

Mikulski stressed that there was “nothing gloomy” about her decision not to seek re-election in 2016, and even showed her trademark wit when asked by reporters about potential successors, saying, “Maryland has a lot of talent, and they’ll be telling you about it in the next 10 minutes.”

Appearing with Mikulski at the press conference was Maryland’s other senator, Ben Cardin (D), who praised his colleague as a powerful force for the Free State who always did her best to fight for her constituents. Cardin also hedged when asked about potential successors to Mikulski, saying it was too early to figure to be talking about candidates, or the possibility that the eventual Democratic nominee might not able to hold onto the seat, given Republican Gov. Larry Hogan’s trouncing of former Lt. Gov. Anthony Brown last fall.

The White House issued its own statement honoring Mikulski, with President Obama calling her an “institution” in the Senate whose legacy “will span generations.”

“As the Chairwoman and now Vice Chairwoman of the Senate’s Appropriations Committee, Barbara has always known that our budgets should reflect our deepest held values,” Obama said in the statement. “In that spirit, Barbara has wielded her gavel and used her booming voice to advocate on behalf of paycheck fairness, childcare, health care, education, women’s rights and countless issues that have contributed to the strength of America’s families. Thanks to her leadership, more women excel in their careers, more children have access to quality education, more families have health insurance and more people are treated fairly under the law.”

Mikulski’s retirement is likely to unleash a flood of potential Democratic candidates, all of whom would have the advantage of running in a Democratic-leaning state during a presidential election year, when Democratic-leaning voters who typically do not participate in midterms come out to cast ballots for the presidency.  One top potential contender is U.S. Rep. John Sarbanes, the son of former U.S. Senator Paul Sarbanes, who recently picked up wealthy areas of Montgomery County in the last round of redistricting, which could give him a good base of donors who might be willing to contribute to a U.S. Senate campaign. Other candidates could include a number of other Maryland congressional Democrats, such as Chris Van Hollen, whose base is in Montgomery County; John Delaney, a prodigious fundraiser who also represents part of Montgomery County; Donna Edwards, who represents Prince George’s and Anne Arundel counties; and Elijah Cummings, who represents the Baltimore area.

“Barbara has wielded her gavel and used her booming voice to advocate on behalf of paycheck fairness, childcare, health care, education, women’s rights and countless issues that have contributed to the strength of America’s families.”

Still another possibility on the Democratic side that has been floated is former Gov. Martin O’Malley, who is often mentioned as a possible presidential contender but whose candidacy has largely not registered on the radar of most Democratic primary voters. An open statewide office such as a U.S. Senate seat could give O’Malley a way of pulling out of a presidential run while still remaining in public service. Other Democrats could include former Attorney General Doug Gansler and Baltimore Mayor Stephanie Rawlings-Blake. A dark horse contender could be former Del. Heather Mizeur, who ran a stronger-than-expected campaign in the 2014 Democratic primary and would take with her a wealth of legislative experience from her time on the Takoma Park City Council and in the House of Delegates. Mizeur, an out lesbian, could also be a likely candidate for the House of Representatives if either Van Hollen or Delaney were to jump into the Senate race.

Potential Republican contenders would include former Congressman and Gov. Bob Ehrlich and a Dan Bongino, a former Secret Service agent who ran against Cardin for the Senate in 2012 and against Delaney for Congress in 2014 who is popular among grassroots conservatives.

Editor’s note: This article was updated to include remarks from President Obama.

John Riley is the local news reporter for Metro Weekly. He can be reached at jriley@metroweekly.com
← Previous Story North Carolina Senate approves opt out for same-sex marriage
Next Story → Ted Cruz: 10 anti-gay statements