As a black, gay choreographer, Shawn Short is fully aware he’s in the minority.

“I know of some, but they’re not out,” Short says of other choreographers and company directors in D.C. The director of Dissonance Dance Theatre understands their fear, but also knows it to be unwarranted. “You’re going to have to affirm yourself in order to lead. You can’t sit back here in the shadows and say, ‘Well, it’ll come to me.’ You’ll have better resources if you find the community.” 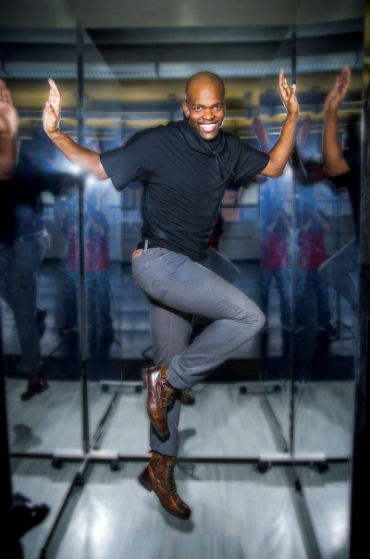 Short knows this firsthand through his work with Dissonance — especially the contemporary ballet company’s annual festival focused on being both gay and African American, “Black to Silver: A Black LGBT Experience.”

“I was a little nervous that first year, because no one wanted to support it,” he says. “I’d get folks that are like, ‘I’ll support it, but I don’t necessarily want to be labeled.’ And I’m like, but it’s your story!… I should write a book on the reflex of what happened after we started Black to Silver.”

It would be a positive volume to date. Joy of Motion Dance Center will host the third festival, subtitled “Sons of Baldwin,” next month at its Friendship Heights location, and the DC Commission on the Arts has provided some funding for the second consecutive year. Short has fielded requests for the festival in cities as far flung as Spartansburg, S.C., and Detroit, and already has plans to take it to New York later this season. He’s also in discussion with organizations like the Human Rights Campaign and DC Black Pride about possibly incorporating elements of Black to Silver into their programming. Another outcome of the festival:, Short, who will turn 37 next week, has met a few local gay men over the age of 60 he calls his “elder club,” a kind of brain trust for future dance works on more historical LGBT themes.

But even more gratifying than the elders is the impact the festival has on fellow dancers. “At first it was just a dream of wanting to tell my own stories, which I felt would have power if someone else was seeing it too,” he says. “Now I see that it’s starting to turn into particularly black male dancers coming to say, ‘I want to do stories like that. I want to be in the company.'” Dissonance now has four male dancers alongside six female, and he anticipates adding more for next season. Male dancers in general are drawn to the company’s work because, they tell Short, “I get a chance to dance, not just stand there and hold the female.” Male dancers who are not straight are additionally attracted to the works reflecting their own experiences — though it’s not as easy as it might sound to pull off.

“Sometimes in rehearsals, some of the guys have to walk out of the space,” he says. “‘I just need to get myself together, because I’ve never had a chance to actually dance a tale that’s real to me.'”

And to do it on stage, so everyone can see it? That’s another whole level of coming out. “It’s mindboggling the freedom that can happen when you’re in a safe space where you can actually just be yourself. You’ve been in a cage so long that you don’t necessarily know how to be free.”

Short managed to find his own freedom when he was a teenager. Raised in a family of jocks in Prince George’s County, the 6-foot, 3-incher was being groomed to play basketball — until his mother caught him skipping out of basketball camp and taking ballet lessons instead. She and his stepfather begrudgingly allowed him to pursue the closest thing to dance he could find. “I became the first male cheerleader of DuVal High School,” he says.

Short came out a couple of years after that, and it took a couple more years for the family to come around. But now the Howard University graduate, who among other jobs is also a professor of ballet at Catholic University of America, is “the golden sheep.” His family comes to see his company’s shows, and his sister teases him: “I had the grandson, but you’re the favorite now.”

Someday, his mother may get a grandchild from him, too. “I really want kids,” Short says. But aside from the fact that he can’t afford surrogacy, there’s too much work to do at the moment. He has a grand vision for his company as well as the Ngoma Center for Dance, a broader organization he founded to offer training and artistic development in addition to performances through Dissonance. One of his goals is to establish a permanent venue for the center.

These days Short rarely has time to date — or even dance. “This is a full-time vision, seven days a week, literally 14- to 18-hour days,” he says, without any sense of regret or worry. “I see everything happening in the right way. I just have to be patient.”