Tori Amos reissues “Little Earthquakes” and “Under the Pink”

The artist reissues dual-CD editions of her first two albums 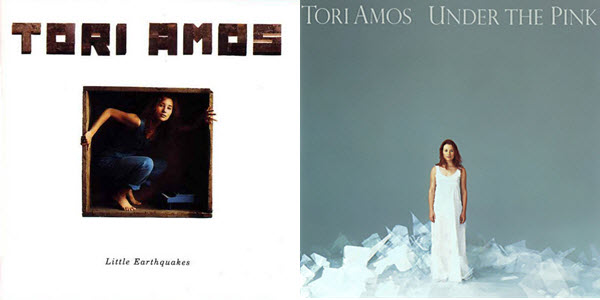 Tori Amos’ first two albums are finally getting the deluxe reissue treatment they deserve. On Tuesday, April 14th, the critically-acclaimed Little Earthquakes (1992) and Under the Pink (1994) are both getting new editions on dual CDs as well as 180 gram vinyl. Each album has been carefully remastered at Abbey Road Studios from the original source tapes, and they sound phenomenal. The CDs includes bonus discs containing most of the relevant b-sides for each album. The new vinyl editions will allow fans to enjoy the classic albums on LP for the first time, as original pressings are now difficult to find and expensive. In the fascinating liner notes, Tori offers new insights into each song over two decades since she wrote them.

Little Earthquakes came four years after Tori’s only release with her band Y Kan’t Tori Read, an overproduced mix of new wave and cheesy arena rock laden with every ’80s cliché imaginable. It was savaged by critics and sold poorly. The musically gifted Amos was able to extricate herself from the overwrought Y Kan’t Tori Read and get to the core of her talents with a confessional “girl and her piano” approach, although it took a while to convince the record label to give her a chance. A slow-burning success, Little Earthquakes didn’t take off right away and only reached #54 on the Billboard Album Chart, but over the years has sold over two million copies in America alone.

Little Earthquakes speaks to the disaffected – those who feel lost, with no voice of their own – and tells them in no uncertain terms “you do have a voice and you can use it.” The imagery, emotional depth and song-craft are striking. “Silent All These Years” is the poignant single that set Tori’s wheels of success in motion, and it still resonates strongly today, remaining her most requested song.

“Precious Things” became an anthem for a generation of young women and men who had yet to discover enough self-worth to realize that being used sexually and emotionally and then being thrown away reflects not on them, but on the loser doing the throwing. Tori would take dead aim at those losers with her third album and a volcano named Pele, but Little Earthquakes doesn’t go on the attack. It’s about a shared sense of worth, and discovering that there is something of value in each of us.

In “Leather,” she opens with “Look I’m standing naked before you – don’t you want more than my sex?”  Little Earthquakes is in part an awakening to the realization that sometimes the answer to that question is “no.” Her a cappella recounting of a violent rape in “Me and a Gun” is a captivating and piercing insight into the thoughts of someone going through a traumatic event. The beautiful “Winter,” with its ornate string arrangement, is an ode to her father, and a reflection on how time passes and dreams sometimes get placed on a shelf to gather dust.

“China” is a wrenching ballad about the slow realization that a relationship is broken beyond repair. “Mother” details those first hesitant moments of independence as, filled with trepidation, she unlocks the door and walks slowly away from the nest. The wistful “Tear in Your Hand” is sung by a woman whose lover has left her for another, but isn’t broken by it.

Such messages of affirmation appear throughout Little Earthquakes, and are clearly derived from genuine experience and ongoing personal struggle. Despite a long string of acclaimed, successful albums, including last year’s stellar Unrepentant Geraldines, Little Earthquakes remains the record most closely associated with Amos among the mainstream music press and casual fans. One of those rare albums that can inspire and change lives, it galvanized the disaffected, misunderstood and the lonely who were touched by it into a community of fans that became legendary for their fierce devotion and emotional connection with Amos, her music and each other. Very few albums in rock history have that kind of impact.

The stakes were high for the follow-up to Tori’s successful debut, but she managed to pull off an album even more adventurous, audacious and compelling than its celebrated predecessor. Under The Pink, released two years after Little Earthquakes, is a step forward in every respect. Her songwriting and vocal skills had improved, the arrangements are inventive and the songs often twist in surprising ways – like the sudden, unexpected squall of heavy guitars in the otherwise wistful “Pretty Good Year,” and the squawking bird-like guitar in one of her signature songs, “God.”

“Bells For Her” is a piece taut with dread, about the ultimate and inevitable betrayal between best friends. Under the Pink also contains two of Tori’s loveliest ballads: “Baker Baker” and “Cloud on My Tongue.” It closes with the epic “Yes, Anastasia” – an ambitious nine minute journey through history via an elaborate piano and string arrangement. Even though practically nothing on the album is commercial in the traditional sense, Under the Pink did well at alternative radio, and several of the tracks became pop hits in the U.K. – “Cornflake Girl,” “God,” “Pretty Good Year” and “Past the Mission” all charted. The album reached #12 in the U.S., and #1 in the U.K.

The b-sides on both albums will be familiar to the die-hards, but casual fans have the opportunity to hear these tracks for the first time. On the Little Earthquakes package, the bonus disc includes songs that are among the most beloved by fans and are often performed in Tori’s live set. Most noteworthy are “Upside Down,” “Take To The Sky,” “Sweet Dreams,” “Mary,” “Sugar,” “Here. In My Head,” and “Flying Dutchman.” Also included is Tori’s popular cover of Nirvana’s “Smells Like Teen Spirit.”

Unfortunately two additional covers that were originally released on the Crucify EP – The Rolling Stones’ “Angie” and Led Zeppelin’s “Thank You” – are omitted. Still, it’s a nice companion to Little Earthquakes, as many of the tracks are as strong as anything on the album.

The same goes for the Under the Pink bonus disc. Standouts are the sublime “Sister Janet,” “Honey,” “Black Swan” and “Daisy Dead Petals.” There are several live tracks that feel unnecessary – unreleased studio material or demos would have been welcome. Missing are soundtrack tunes like “Butterfly” and her cover of R.E.M.’s “Losing My Religion,” as well as a number of additional cover tunes that appeared on various sources during this period. It’s also unfortunate that the vinyl editions contain only one disc each – it certainly would have been nice to have the key b-sides on LP. It feels like a missed opportunity.

Still, these beautifully remastered reissues offer the chance for existing fans to rediscover two of the most consequential albums of the early ’90s in crystalline audio clarity, and for new fans to dig in and experience recordings that remain every bit as potent as when they first emerged over two decades ago. Let’s hope more Tori Amos reissues follow, as Little Earthquakes and Under the Pink represent just the beginning of an ever-evolving musical journey that is still very much alive.