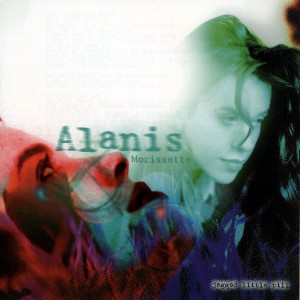 Next month marks the twentieth anniversary of one of the most pivotal albums of the ’90s. Alanis Morissette’s Jagged Little Pill, released on June 13, 1995, is a piercingly emotional powerhouse that continues to resonate with millions of listeners worldwide. The pop album has sold over 30 million copies and became the decade’s highest selling in America. Buoyed by six smash singles, Jagged Little Pill earned Morissette five Grammy Awards, all for an album that was released shortly after her 21st birthday.

The ’90s were an era launched by grunge. The rules of rock and roll had changed, and suddenly music was more torridly soul-bearing than ever. If Kurt Cobain could wallow in sardonic boredom and blistering self-loathing, Alice in Chains could simmer with harrowing and agonized epics that drag the listener through the innermost hell of drug addiction, why couldn’t Alanis Morissette revel in caustic retribution? Anger and bitterness was part of the fabric of the decade, but Morissette’s ability to inject this turmoil into superbly produced and commercial songs of mass appeal proved an explosive combination that nobody else was able to match.

Jagged Little Pill is the culmination of a journey for Morissette that began when she entered show business in elementary school on the children’s show You Can’t Do This on Television. As a teenager, she released two dance-pop albums for MCA Records in her native Canada — 1991’s Alanis and 1992’s This is the Time. Her debut was moderately successful, but the follow-up tanked and she was dropped from her label. Neither album was ever released outside of Canada, and Morissette has largely disowned them.

Morissette’s breakthrough came when she met up with Glen Ballard, an ace producer and songwriter who has worked with numerous big-name pop and R&B artists in the ’80s and ’90s. Ballard’s most notable success before Jagged Little Pill came with two iconic chart-toppers that he co-wrote: Michael Jackson’s “Man in the Mirror” from 1987, and Wilson Phillips’ “Hold On” from 1990. Morissette was eager to break out of the teeny-bopper mode of her previous albums, and go in a more hard-edged, personal direction. Her collaboration with Ballard proved immensely fruitful. He was able to help mold the young artist’s over-boiling emotions into commercial pop-rock that’s catchy enough to garner a wide audience but still intense and impactful.

Jagged Little Pill didn’t exactly fly off the shelves from day one. Several weeks after its release, the first single, “You Oughta Know,” hit airwaves. It first gained traction at alternative radio. Once MTV picked up the video, the song was suddenly everywhere. Its biting scorn and bitterness directed at a former lover was shocking in its way. “Would she go down on you in a theater?,” “And are you thinking of me when you fuck her?” and “Every time I scratch my nails down someone else’s back I hope you feel it!” are not typical Top 40 fare. A searing castigation that gives voice to the inner thoughts of discarded lovers, the song instantly connected with the similarly spurned, or those who just loved the cathartic takedown.

“You Oughta Know” launched Jagged Little Pill into the upper reaches of the Billboard Album Chart where it hit #1 for two weeks in October 1995. The album showed remarkable staying power as subsequent singles maintained its momentum, logging twelve weeks overall at #1.

Although Jagged Little Pill is sometimes regarded as an angry album, it really covers a wide spectrum of emotions. Only “Right Through You” occupies the same derisive territory as “You Oughta Know.” In “Head Over Feet” she shows humor, warmth and effusive affection as she sings about her current love. She’s philosophical and searching in hits like “Ironic,” “You Learn” and “Hand in My Pocket.” She tackles the teenage angst of battling stringent parental expectations in the poignant “Perfect.” The album closes with the haunting a cappella “Your House,” in which Morissette breaks into an ex-boyfriend’s home and sadly revels in the familiar scents and sights to which she is no longer privy.

Twenty years later, Jagged Little Pill still holds up as a landmark. It’s the potently emotional travails of a young woman exploring the pain of broken relationships, and the wonder and promise of her burgeoning adulthood. The perfect collaborator, producer Ballard allows Morissette to be front and center where she belongs, keeping the arrangements tight and focused. Part of the strident immediacy comes from the fact that all the vocals for the album were recorded in one or two takes; it’s fresh and raw, not overworked in the studio. The album has aged well — it still sounds crisp and contemporary.

Morissette followed her breakthrough release with the sprawling masterpiece Supposed Former Infatuation Junkie (1998) and the incisive and mature Under Rug Swept (2002), both of which are arguably superior to Pill. But those albums, and others that followed, never had a chance to replicate the impact and success of Jagged Little Pill, and one gets the feeling that Morissette wouldn’t want it any other way. Jagged Little Pill captures a moment in time in which all of the stars aligned to make it something special. It’s one of the cornerstone albums of the last two decades and is part of the very definition of ’90s pop/rock, continuing to speak to listeners all over the world as they endure those universal struggles of a young person dealing with love, loss, betrayal and boundless possibility.