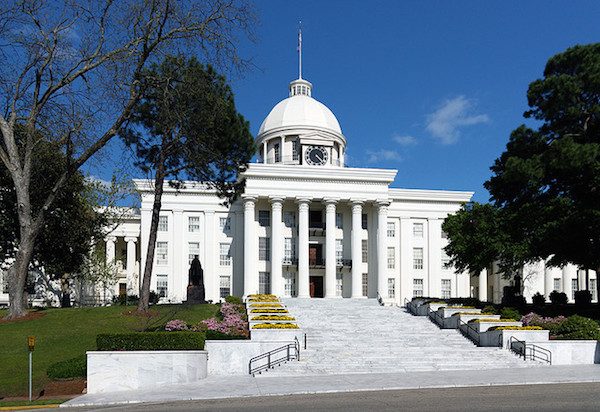 The federal judge responsible for overturning Alabama’s ban on same-sex marriage in January issued a second ruling on Thursday, finding that same-sex couples have the right to marry in all Alabama counties, and prohibiting probate judges from enforcing the voter-approved ban.

But same-sex couples will not be able to marry just yet. U.S. District Judge Callie Granade stayed her order, putting it on hold until the U.S. Supreme Court weighs in on whether same-sex marriages must be licensed and recognized by the various states under the Equal Protection Clause of the Fourteenth Amendment to the U.S. Constitution.

Granade’s ruling hits back at grandstanding by Alabama Chief Justice Roy Moore, a fierce opponent of LGBT rights, who urged state officials to continue to uphold the ban despite the fact that Granade had previously found it to be unconstitutional. Moore urged state probate judges to refuse to issue marriage licenses to same-sex couples, telling them they would be “acting in violation of their oaths to uphold the Alabama Constitution” if they issued such licenses.

Same-sex couples had been able to get married for three weeks following Granade’s first ruling. But the Alabama Supreme Court finally put the brakes on those nuptials in March, when it ordered probate judges to stop issuing licenses to same-sex couples. During that period, about 500 same-sex couples were married, according to the Alabama Department of Public Health. Supporters of marriage equality then filed a class-action lawsuit on behalf of gay couples, which prompted Granade’s updated ruling on Thursday.

Granade’s order, even though stayed until the Supreme Court decision has been viewed by supporters of marriage equality as a victory.

“This is a victory for the LGBT community of Alabama,” Susan Watson, executive director for the American Civil Liberties Union (ACLU) of Alabama, said in a statement. “We applaud the court for its ruling that puts an end to the chaos created by the Alabama Supreme Court. Today love is triumphant.”

“Judge Granade’s ruling is decisive and definitive. It ends the chaos and confusion that Attorney General Strange and Chief Justice Moore have intentionally caused through their reckless rejection of federal constitutional principles,” added David Dinelli, deputy legal director for the Southern Poverty Law Center. “As soon as the United States Supreme Court issues its ruling in June, Judge Granade’s decision will go into effect, and probate judges in every county of Alabama will be bound by a federal court order to comply with constitutional principles of fairness and equality. This is a good day for all Alabamians who believe in the rule of law.”

John Riley is the local news reporter for Metro Weekly. He can be reached at jriley@metroweekly.com
← Previous Story Josh Duggar resigns from FRC amid molestation scandal
Next Story → New Orleans hits back against Jindal’s executive order