Project CARS is an unashamedly punishing racing game, but it’s all the more rewarding as a result 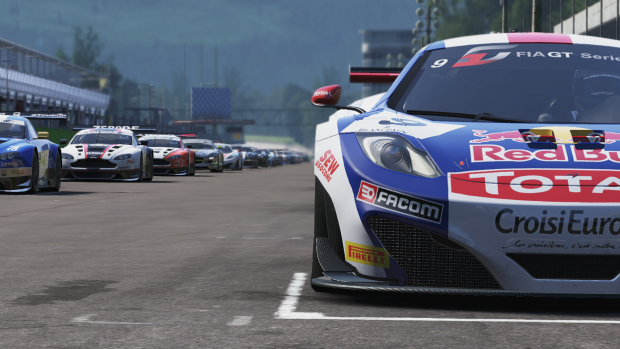 If, like me, you spent your childhood devoting hours to Gran Turismo, then Project CARS is definitely the game for you. That slavish devotion to simulation, to putting you in the driver’s seat of a myriad of powerful vehicles, to throwing you onto a track and demanding your best for every last inch of road — it’s all here.

Standing in stark contrast to its peers, DriveClub and Forza, Project CARS has zero time for handholding. There’s no tutorial missions here, no easy rewind features to correct any mistakes, no concessions to those who prefer an arcade style of car control. Starting it up for the first time, you’ll be thrown into a race weekend — pick the car, get in, drive. The rest is up to you.

Project CARS, from British developer Slightly Mad Studios, has a more personal connection to its players than most. It started as a concept, which was funded and beta-tested by PC gamers, before being ported to console. Its central conceit, its physics engine, the myriad features on offer, all are a result of extensive testing and feedback with real players. As a result, Project CARS (or, Community Assisted Racing Simulator), is a beautifully honed motorsport simulator.

It’s also beautifully punishing for new players. My first few races were spent getting to grips with a control system that demands skill. It has been set up with steering wheels in mind, supporting a bevy of them on PC and several on console, but with a humble controller it’s still eminently precise. Stepping into the cockpit of a supercar, you’ll have to balance throttle, brake force, steering inputs. You need to remain cognizant of the laws of physics as you slice from one corner to the next, or attempt to bury the throttle coming out of a tight bend. All too often I would find myself racing as I would in any other game, only for whatever I was controlling to be send into the nearest wall — or another car. 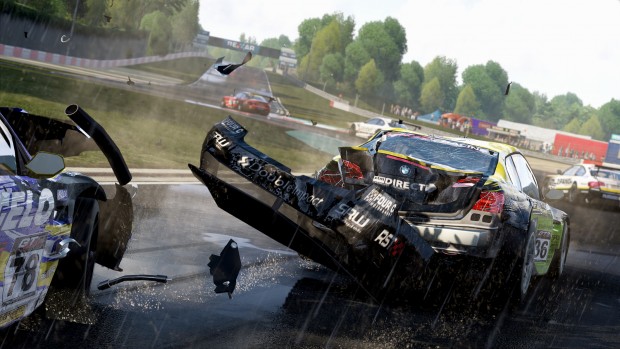 But, eventually, it clicks. Feathering the gas pedal through tight corners, using light turns on the wheel, keeping the brakes in check, being aware of tire degradation, fuel load, damage to the bodywork and vital components. Racing in Project CARS demands your full attention if you want to secure that podium finish, or score the fastest lap. For casual gamers, it can be offputting, but for someone who loves cars, it’s like crack cocaine in digitized form.

It helps that Project CARS doesn’t lock away its content, demanding that you grind your way to better cars by earning meaningless money or completing arduous challenges. Its career mode is just that: a career. You’ll set up your profile and choose a team to sign to, which you’ll then race with for an entire season (one in-game year). You’re presented with several tiers of racing, from humble go-karts to full-blooded LMP racers or standard road cars. Pick a motorsport, sign up to a team, and you’re good to go.

Though I didn’t have to, I started at the bottom with go-karting, intending to work my way up through the various racing tiers as my skills progressed. Oh, how naive I was. Far from being simple, go-karts in Project CARS require deft hands, with aggression on the gas pedal rewarding you with a beautifully rendered, smoke-filled spin off the track. As the game’s excellent AI — they won’t adhere rigidly to the same line, but also won’t try to kamikaze into you during busy corners — sailed past me, I was forced to rethink my strategy of attack. Several races later, I was leading the field. 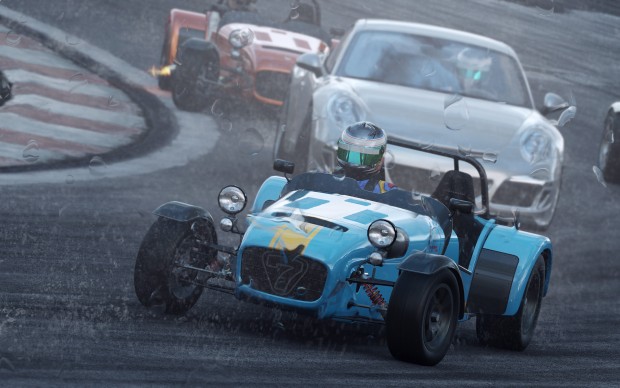 Project CARS rewards dedication. Over the course of each race, which can involve a practice session, qualifying session and then the race itself (or, for go-karts, two races), you’ll earn points for hitting the fastest laps and for achieving podium finishes. Those points will lead to championships wins. Championship wins and proficient driving will unlock additional events — invitation-only race days that can be entered every calendar year. Winning will also get you noticed by other teams, who will try to recruit you for the next season, either to secure victory in their car, or to jump up to another tier of racing. Of course, thanks to its open structure, if at any point you don’t like the motorsport you’re competing in, you can end the contract and sign up for another one. It’s a level of choice that feels utterly joyous after years of racing games imposing artificial restrictions on what’s initially available.

In terms of what’s actually available, though, some could be disappointed. The game currently features sixty cars, with a further fourteen either offered as preorder bonuses or coming soon as DLC. That pales in comparison to Forza Horizon 2, which has more than 200 vehicles, or Gran Turismo 6, which contains over one thousand, but there’s an argument to be made here for quality over quantity. Plus, there’s no shortage of courses to throw the included vehicles around, with over 30 locations and 110 track layouts on offer, covering real locations such as Laguna Seca and the Nürburgring’s Nordschleife and fictional ones such as Azure Coast, inspired by Côte d’Azur in France.

It also helps that the game is impeccably modelled. On PS4 and Xbox One it’s running at 60fps, though resolution is dropped down from 1080p to 900p on the latter. Car models are gorgeously detailed, with accurate interiors and beautifully shiny exteriors. The game’s damage model is extensive, with body parts crumpling and falling off, tires showing wear, and components getting damaged. Environments are occasionally a little bland, but the courses themselves are wonderfully rendered. In addition, the game features a fully customizable weather system, including fog, thunderstorms and glorious sunshine, as well as a dynamic day/night system. Starting a race in pouring rain — which realistically impacts the way cars handle and respond, and dramatically reduces visibility — and ending it with sunlight peeking through the clouds will leave you in no doubt that Project CARS is a beautiful game. On console, it still can’t compare to PS4 exclusive DriveClub, but on PC it blows most other games out of the water with astounding realism. 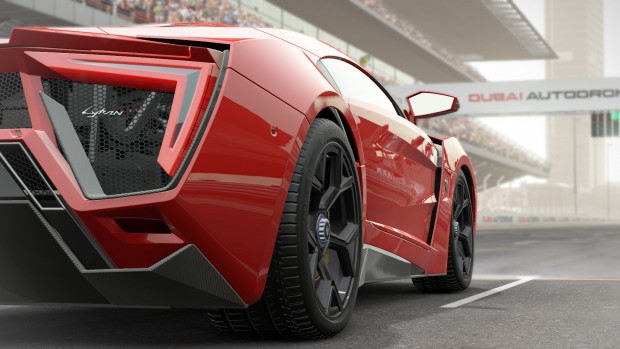 That heady attention to detail is backed by a wonderful soundtrack. I’m not talking about music, which is a curiously enjoyable mix of techno and opera and relegated to menus. No, races themselves are scored only by the roaring of engines, screeching of tires, squealing of brakes and crunching of body parts as racers jostle for position. It’s mechanically melodious, a song to every petrolhead’s ear. Slightly Mad Studios has captured audio brilliantly, with powerful V8s snarling and growling on gear changes, Formula A cars screaming as they ramp up the revs, and go-karts buzzing merrily as the gas pedal is pressed. I can’t remember the last time a racing game sounded this good — with a solid set of headphones and the right camera view (there are many, including a helmet view complete with visor), you’ll feel as if you’re sitting in the car itself.

And, really, that’s what Project CARS does so well. Whether against AI opponents or real racers in the game’s simple yet effective online multiplayer, Project CARS puts you squarely in the driver’s seat of a racing car, hands you the keys, and tells you to enjoy yourself. Piloting Mercedes’ SLS AMG round a track, with its viciously sonorous V8 rumbling and barking through my headphones, I felt like I was there, navigating from apex to apex. Coupled with a steering wheel and an Oculus Rift VR headset (the game will also support Sony’s Morpheus headset when that launches), Project CARS could be one of the closest experiences to actually being in a car.

No, it’s not for casual racers, and yes, it’s brutally unforgiving — especially with driver aids turned off and the AI turned up to maximum difficulty — but for the dedicated racers out there, it’s one of the best motorsport simulators available. Finding the fastest line around every course, trimming those seconds from your lap times, picking the right corners to execute an overtaking maneuver — that’s where Project CARS excels. If you’re looking for a drop-in and drop-out racer, this isn’t it. If you’re looking for something to consume your free time and generate that automotive tingle in the pit of your stomach, I can’t recommend it enough.

Project CARS is available on PS4, Xbox One and PC. A Wii U version is due later this year.