Allergic Reaction: The Tale of the Allergist’s Wife (Review) 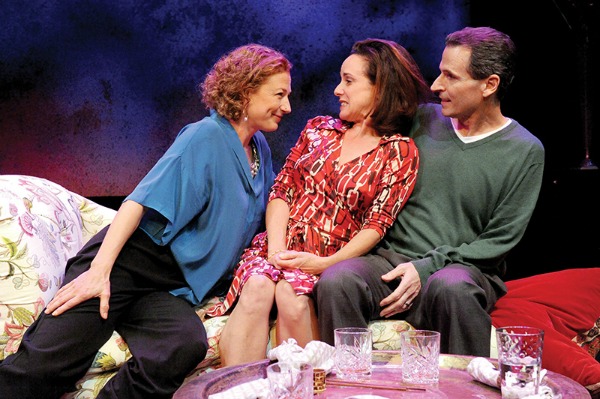 The Tale of the Allergist’s Wife – Photo: Stan Barouh

If you’re familiar with writer/performer Charles Busch‘s previous work, including the uproarious Die Mommie Die and Psycho Beach Party, then you expect the funny. But Allergist is a different animal than Busch’s previous works, chiefly because it was written from the get-go as a play for others, not Busch, to star in — and none of them in drag.

And as it begins, you may sense that, despite being Busch’s first play on Broadway, and one earning him his first Tony nomination, Allergist is not up to his previous campy level. It’s not, but it’s also not a thoroughly navel-gazing and whiny play about poor rich New Yorkers from the Upper West Side, full of angst and ennui about having money and access but no meaning or purpose in life. No, that’s just the initial setup for a play that becomes a fanciful and edgy satire about modern life, love and the pursuit of personal and professional happiness — and the boundaries, mostly self-imposed, that get in the way.

The focus is on Marjorie Taub, who’s so depressed she can’t get off her couch when we meet her. Her husband, the allergist of the title, can’t shake her stupor or that of the play, which doesn’t spring to life until we meet Marjorie’s unsupportive and embittered mother Frieda (perfectly realized by Barbara Rappaport). She can’t stop nagging or talking about her bowel movements — or lack thereof — usually as the others are eating. By the time we meet Marjorie’s unbelievable, pansexual childhood friend, Lee Green, we’re off on an adventure as improbable and hysterical as many of Lee’s clearly exaggerated stories about hobnobbing with the world’s elite while doing international charity work.

Stylishly directed by Eleanor Holdridge, Allergist is a showpiece for Theater J’s longtime acting ace Susan Rome, who plays Marjorie in various shades of realistically over-the-top ways that would make Busch proud. Not to be outdone is Lise Bruneau, who portrays Lee as a modern-day Mame Dennis. In her hands, Lee is so alluring and captivating, it’s essentially laughable that Marjorie or her husband (Paul Morella) would ever try to resist her charms. You’ll laugh at that and so much more in this daffy play, which ultimately proves itself to be as lovable as others in Busch’s oeuvre.