Wilson Phillips: Holding On for More 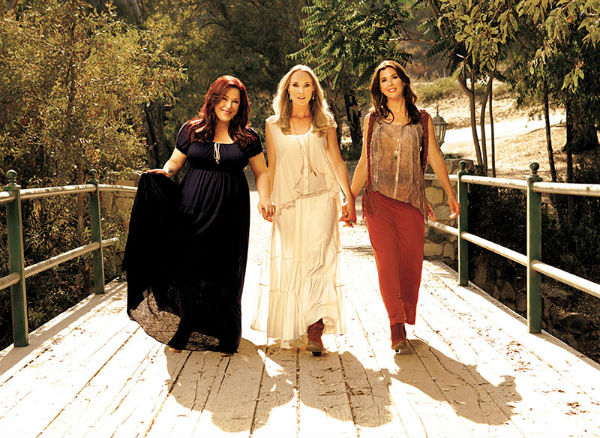 Wendy Wilson couldn’t even begin to tell you how many times Wilson Phillips has performed “Hold On.” While on set for the 2011 film Bridesmaids, she guesses they sang it 50 times alone.

Even your favorite song would start to wear thin with that much repetition. Especially if, as with Wilson Phillips, it’s the same version every time. So maybe, she’s asked, the group should consider an alternate version to throw in the mix every now and then — for your own sanity?

She’s kidding, of course. Fans expect to hear the original 25-year-old version of the group’s first and biggest hit.

“‘Hold On’ means so many things to different people,” Wilson says. “Some people, it saved their lives, so they come there and they want to hear that song, and they’ll just be hysterically crying. And then we’ll be crying. And other people saw Bridesmaids, and they’re like ‘Oh, I like that song. I want to just see it, it’s fun.'”

And ultimately, it’s audiences that keep the band interested. “What makes it fresh is the audience,” Wilson says, “because their reaction to the song is always so endearing to us, and it inspires us. When we see their faces — when our songs affect people — it just makes us understand why we’re doing what we’re doing. That’s what it’s all about — just moving people and relating to people.” So no, in case you’re wondering, Wilson doesn’t sing “Hold On” when she’s alone: “You mean in my house? No! Never!”

The trio of Wilson Phillips, which also includes Wendy’s older sister Carnie and Chynna Phillips, started singing together when they were toddlers. Eventually, they turned to original compositions, which caught the attention of their famous musician mothers, Marilyn Wilson-Rutherford of the Honeys — managed by her husband, Beach Boy Brian Wilson — and Michelle Phillips of the Mamas and the Papas. It was Phillips who made the connections that led to the trio having breakthrough success, with a self-titled 1990 debut album that sold over 10 million copies worldwide and produced five soft-pop hits, including three No. 1 songs on the Billboard Hot 100: “Hold On,” “Release Me” and “You’re in Love.”

“Once that movie came out, the phone started ringing. It revitalized our career.”

But that kind of instant success is hard to sustain, let alone repeat — and shortly after its 1992 sophomore album Shadows & Light barely measured a blip on the radar, comparatively speaking, Wilson Phillips decided to go on indefinite hiatus. All three women started families, and that remains the priority. “We are not working on new music at the moment,” says the 45-year-old Wilson. “I’ve got some song ideas, but it’s just a matter of finding the time.”

Technically, the trio returned to active status in 2008, but other than concerts here and there, it wasn’t until 2011 that the band was back in pop culture circulation.

“We don’t know much about it, but it’s called Bridesmaids,” Wilson relates how the band’s management company pitched the cameo appearance that changed the game. Even during the shoot, they were in the dark. “We were not given any background. We didn’t know the plot of the movie or anything.” Naturally they also weren’t aware that the band and “Hold On” are used as snicker-bait. “Even though they were kind of making fun of us in the movie, it was still okay,” Wilson says. It was more than okay, in the end. “Once that movie came out, the phone started ringing. We got many more shows, and it revitalized our career.”

It’s even spurred demands to perform at weddings to recreate the Bridesmaids scene. “We just surprised a couple in Bali,” says Wilson, who adds that it didn’t quite work out as planned. “The couple thought that we were impersonators at first. That was the hilarious part.”

Wilson Phillips is scheduled to perform Sunday, June 14, at 6 p.m. at the 40th Anniversary Capital Pride Festival. The Capitol Concert Stage is located in the 300 block of Pennsylvania Avenue NW. For more details, visit capitalpride.org.