“I run my kitchen like I was taught in Charleston,” Mark Mulvey says. “Very strict.”

Mulvey, the head chef at Duplex Diner, might have downhome roots, but he’s anything but country cooking. Growing up in Winchester, Virginia, his journey to gastronomy wasn’t exactly a straight shot. “I was working at this bar in Blacksburg after high school,” he says. “Just working on the line, but I remember one of my bosses told me I should check out culinary school.” The next year, he was enrolled in the Le Cordon Bleu Institute for Culinary Arts, and the year after that, he was working his first externship in a high-end restaurant in Charleston, South Carolina. 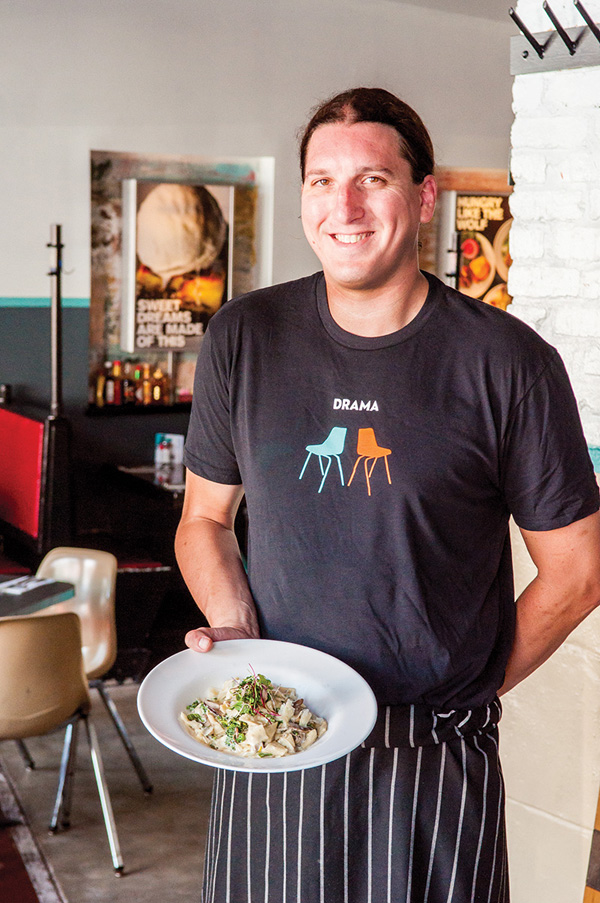 “We only have four burners back there, so I’ll never make a dish that takes multiple saucepans.”

Holding a plate of fresh pappardelle pasta with mushrooms and broccolini, steeped in a parmesan cream sauce, Mulvey beams with pride. “We make our pasta in house,” he says. “Unfortunately, people aren’t ordering this dish with beach season coming up.”

But the first bite of this light pasta dish will make you forget about Rehoboth, instead transporting you directly to Rome. In a way, the pappardelle perfectly captures Mulvey’s style: a humble presentation with only a few ingredients that complement each other beautifully. “Food should be simple,” he says. “Simple tastes good. It only needs the correct procedure, and understanding your ingredients. Let the food speak for itself.”

And the food at Duplex speaks volumes. The Airline Chicken Breast with farro, black beans, and corn is a perfect example of the bistro flair on a traditional diner dish. With summer coming around, the menu has added new salads featuring fresh ingredients “I really like the Watermelon and Basil salad,” Mulvey says. “It’s refreshing to have on a hot summer day.” Of course, what would a diner be without its traditional fare?

Mulvey’s twist on the traditional meatloaf features a more diverse spice portfolio, and includes a carrot salad. “When I started in 2011, we had a meatloaf competition,” he says. “We asked our customers to vote on the better meatloaf: mine or the one that was on the menu before. Mine won, so now it’s on the menu.” Also, make sure you swing by for Monday Happy Hours where a basket of tater tots comes on the house.

Read: Duplex 3.0 – The Diner changes hands but stays the course.

Cooking for a mainstay of Adam’s Morgan doesn’t come without its own set of challenges. “We only have four burners back there,” he says. “So I’ll never make a dish that takes multiple saucepans.” But Mulvey’s philosophy in the kitchen works best when it’s under constraint, and his passion for cooking is linked to his desire to grow as a cook.

“I love learning new things,” he says. “You might try something, and it might not work, but that’s exciting. I’d never worked with broccolini before I came here, and now I love it. There’s always a pulse of something new in a restaurant. I love that.”