Lego Jurassic World thrives on good-humored nostalgia, but its gameplay is mired in repetition 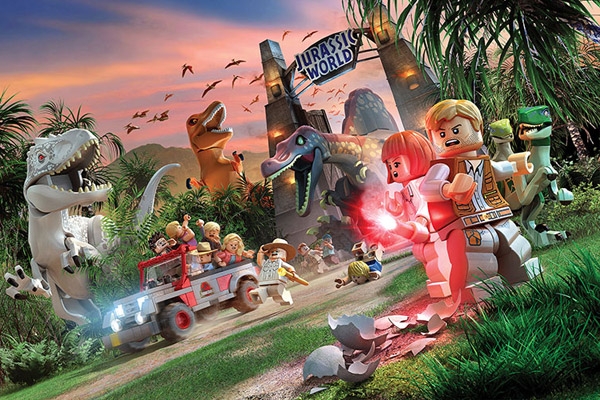 At what point does nostalgia give way to complacency and repetition? For Lego Jurassic World (

), it’s about halfway through, when it becomes quickly apparent that you’ve seen everything the gameplay has to offer and you’ll be coasting on its humor and presentation to the game’s end.

Look, I’m a fan of the Lego games. There’s an undeniable charm inherent in the Telltale Games’ interpretations of films and comic book heroes. However, there’s also a laziness to their design, a repetition in the core gameplay that, while appealing initially, quickly reminds you why these games are marketed at kids — even if many adults succumb to their charms.

It’s not that Lego Jurassic World isn’t ambitious. Quite the opposite. Rather than tackle the new, blockbuster entry in the franchise alone, stretching its rather thin narrative over an entire game, Telltale has instead crammed in every Jurassic film. Yes, over its 8-hour campaign, you’ll be jumping into Jurassic Park, Lost World and that third entry we all try to forget ever happened.

“This is a Lego game, so any sense of terror has been effectively scrubbed from the game. In its place, there’s humor. Thousands of bricks worth.”

It’s a genius move. Instead of bogging down, as the game’s writers try to adapt the slower elements of an entire film into their narrative, the game instead is a highlights reel of the best scenes from each film. You’ll spend just a handful of levels in each narrative, controlling principal characters and the various dino-related mishaps they encounter.

Of course, this is a Lego game, one designed to appeal to families, so any sense of terror has been effectively scrubbed from the game (save for Ellie Sattler’s attempts to reactivate the power in the first film, which is a surprisingly dark moment). In its place, there’s humor. Thousands of bricks worth. Covering multiple genres, including slapstick and wordplay, the Jurassic films are transformed into a broad, laugh-out-loud comedy. 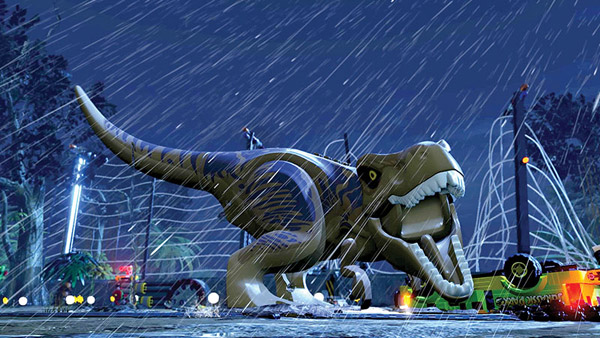 The iconic reveal of the T-Rex during the first film’s thunderstorm is lightened by constructing a chew toy jack-in-the-box to distract it. The beach scene at the end of Jurassic Park III offers a genuine belly laugh as Spinosaurus and a horde of raptors run after the departing humans, each dino clutching a tiny Lego suitcase. Lost World‘s long grass scene swaps horrifying terror for an amalgam of visual gags and humorous shouts from secondary characters. A lawn mower built to distract a Raptor will be seen chasing it a few minutes later. “Why did we go into the long grass? This was the worst idea ever!” one InGen hunter yells. “You’re telling me,” another responds, as they flee from raptors, “my hay-fever is acting up a storm!”

The constant chatter and jokes from the game’s background characters may add humor, but they also expose a rather glaring hole in the game’s audio. Whereas characters created by Telltale feature deep, rich vocal performances, the main characters have their lines ripped directly from the films and in certain situations it just sounds completely out of place — Jeff Goldblum’s Lego character will talk with audible background distortion, while another will speak in perfect clarity. It’s jarring, though understandably an easier method than recording new dialogue.

Once you start to focus on the gameplay, things start to fall apart. Lego games have a tried-and-tested formula: smash things, collect studs, build objects and interact with them to solve a puzzle and advance. It’s been that way for years now, but that doesn’t mean there isn’t considerable room for improvement. The main feature here is that dinosaurs are part of the playable roster. Arguably, this is Lego Jurassic World‘s main selling point, as controlling a Velociraptor, Triceratops, or Dilophosaurus to bash through walls, solve puzzles or fight other dinosaurs is stupidly good fun.

Other characters, though, are relegated to familiar abilities. Dr. Alan Grant can reconstruct skeletons or turn them into new objects. Dr. Sattler, a paleobotanist, sifts through piles of dung to find new items. Other characters can track objects, repair items, or charge terminals. Quick time events and ludicrously simple minigames are in abundance — the latter, in particular, seem dumbed down even for a Lego game, involving matching three button presses to access computers.

And so it goes, for eight hours through the game’s story, repeating the same moves, the same puzzles, the same actions, the same events. Over and over and over, ad nauseam. Once you’ve wrapped the final film, you can then begin to collect the hundreds of items scattered through each level — though whether or not you’ll want to depends on how irritated you are with the game’s mechanics. However, it’s here that the Lego franchise thrives, in free play, with new dinosaurs to unlock, characters to buy, people to save, things to find and studs to collect. You can spend another ten or so hours combing each level — or the island hubs that connect them, which offer an interesting open-world aspect to the game.

For most, however, nostalgia will only take them so far in Lego Jurassic World. It offers four films, an incredibly pretty aesthetic, bags of humor and the hook of controlling ground-stomping dinosaurs (albeit tiny plastic versions of them). Once that glossy sheen has worn off, though, you’re left with the bare elements of Lego‘s all-too-familiar game design. Whether that’s a good thing or not depends entirely on you, but my time on Isla Nublar and Isla Sorna was one of mixed emotions. With two new Lego games on the horizon offering dramatically different gameplay, one wonders how long it will be until the block-smashing, stud-collecting style of Lego Jurassic World becomes extinct.