) is an important film. It’s important for several reasons, but only one of them is perhaps its most discussed feature: this 90-minute, Sundance-screened film was shot almost entirely on an iPhone.

Well, technically three iPhones. The 5S at that. Of course, they were aided by an app that allowed director/writer/producer/cameraman Sean Baker to set focus, exposure and a variety of other factors, as well as custom lenses to ensure that a smartphone’s digital video looked as though it belonged on a cinema screen. However, after a few minutes of “Oh wow, this is a smartphone?”, you’ll completely forget that what you’re watching is a polished, controlled, edited version of the same videos you capture on a daily basis.

Instead, the intimacy, the immediacy, the mobility of using smartphones lends the film a near-documentary quality, drawing you into the lives of its central characters in a way that traditional film might not. Rather than keep viewer at arm’s length, Tangerine puts everything — limitations included — on-screen for audiences to absorb.

Tangerine is particularly important for its casting, with two African-American, transgender sex workers as protagonists. Sin-Dee (Kitana Kiki Rodriguez) is fresh from a month-long stay in prison. After convening with her best friend Alexandra (Mya Taylor), she learns that Chester (James Ransone), her boyfriend-cum-pimp-cum-dealer, has cheated on her with “white fish” Dinah. Sin-Dee proceeds to stomp her way through West Hollywood intent on finding Chester and Dinah (Mickey O’Hagan). Intertwined into the main story is a subplot about taxi driver Razmik, who in between passengers searches for transgender sex workers to satisfy his lust, while harboring a deep crush for Sin-Dee.

It’s utterly engrossing, aided immeasurably by the film’s strong, saturated colors (the main theme is orange, hence the film’s title) and the slightly surreal nature of the iPhone’s digital video. The script was developed with the cast, lending dialogue a natural feel. The acting is only occasionally overdramatic, and there’s moments of quiet pathos mixed with genuine laugh-out-loud exchanges. Everything bursts with life and depth — from the other sex workers encountered on street corners, to the random passengers we’re introduced to in Razmik’s cab, to the sleazy customers we see glimpses of at Dinah’s motel brothel.

It’s a world that feels simultaneously repulsive and inviting.

It’s a world that feels simultaneously repulsive and inviting. What’s more, it’s stories we rarely see on-screen — despite the humorous nature in which Sin-Dee and Alexandra’s stories are conveyed, the moments where they fight for money, or struggle with drug addiction, or, in Alexandra’s case, seem desperate for a life better than what they have, are powerful. Only the film’s slightly overblown ending — in which almost the entire cast, including Razmik’s family, are thrown into one tense confrontation — reminds you that this is a scripted film.

Tangerine is far from perfect, but with a dynamic cast, a seldom utilized setting, and the wondrous use of technology in its creation, it’s an incredibly accomplished indie film. — Rhuaridh Marr 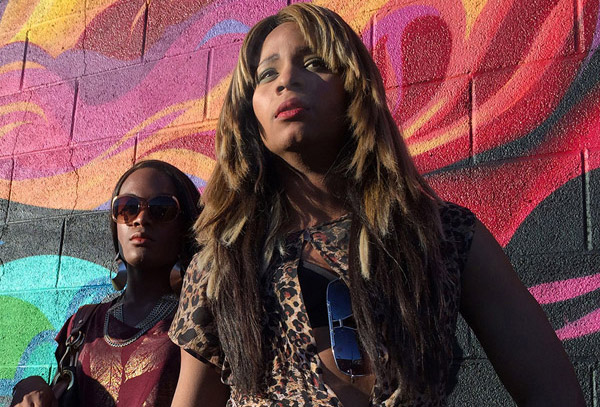