“We must deal with the world as it is, not as we might wish it to be,” said Robert Gates, the president of Boy Scouts of America (BSA). “The status quo in our movement’s membership standards cannot be sustained.” 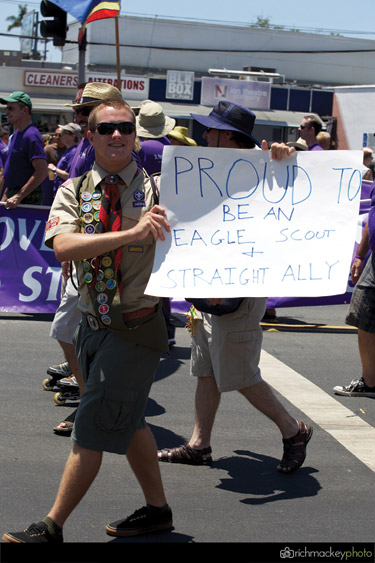 Speaking at the BSA’s national meeting in Atlanta earlier this year, Gates was referencing the Scouts’ ban on gay adult members.

“We cannot ignore growing internal challenges to our current membership policy from some councils,” he continued. “Nor can we ignore the social, political and juridical changes taking place in our country — changes taking place at a pace over this past year no one anticipated.”

Although BSA did not take any action to lift the ban at the time, the remarks by Gates — the former U.S. Secretary of Defense and CIA chief — foreshadowed what was to come. On July 10, the BSA’s executive committee unanimously approved a resolution that would allow openly gay adults to serve as Scout leaders and parent volunteers. BSA previously lifted a similar ban prohibiting gay Scouts from participating in the organization in 2013.

However, while the resolution would allow openly gay adults, it also contains provisions that allow Scout troops chartered to churches or other religiously-affiliated institutions to set their own adult leadership standards. That means they’ll be able to continue discriminating against LGBT people by citing religious objections.

In any case, the resolution must still be ratified by the National Executive Board on July 27 before it can go into effect, but is expected to be approved.

It is precisely that expected ratification that has created a political stir over the past week, with some social conservatives weighing in to decry the potential lifting of any ban on gay adult leaders.

First up was presidential candidate Gov. Scott Walker (R-Wisc.), himself a former Eagle Scout whose two sons were also active in BSA.

“I have had a lifelong commitment to the Scouts and support the previous membership policy because it protected children and advanced Scout values,” Walker said on the campaign trail last Tuesday. His comment was reported by The Independent Journal Review, a conservative website.

But Walker eventually walked back those comments after receiving criticism from various LGBT rights groups — among them the Human Rights Campaign — that decried the comments as relying on stereotypes of gay adults as child predators. Walker later said he was not pushing to keep the ban, saying it was “up to the Boy Scouts” whether to keep it in place and further clarifying his comments about “protection.”

“The protection was not a physical protection,” Walker was quoted as saying by The New York Times. Rather, it was about “protecting them from being involved in the very thing you’re talking about right now, the political and media discussion about it, instead of just focusing on what Scouts is about, which is about camping and citizenship and things of that nature.”

In contrast to his rival Walker, presidential candidate and former Gov. Rick Perry (R-Texas) has adopted a more hardline stance, refusing to apologize for a statement he made in a 2008 book.

“Openly active gays, particular advocates, present a problem,” Perry wrote in On My Honor. “Because gay activism is central to their lives.”

“Openly active gays, particular advocates, present a problem,” Perry wrote in On My Honor. “Because gay activism is central to their lives. It would unavoidably be a topic of conversation within a scout troop. This would distract from the mission of scouting, character building, not sex education.”

In an interview on NBC News’ Meet the Press, Perry defended his previous statement. “I believe that scouting would be better off, if they didn’t have openly gay scoutmasters,” he told moderator Chuck Todd.

Meanwhile, the socially conservative activist organization Concerned Women for America (CWA) has begun circulating an “open letter” to Gates that people opposed to the policy change can sign. In the letter, CWA references a previous Supreme Court decision, Boy Scouts of America v. Dale, which found that BSA’s decision to expel openly gay Scoutmaster James Dale was protected by the group’s constitutional right to freedom of association.

“As a strong believe in the time-honored, time-tested institution that is the Boy Scouts of America (BSA), I’m urging you to remain true to BSA’s founding principles and values as they relate to ‘sexual orientation,'” the letter reads. “The Supreme Court affirmed your right in 2000 to exclude openly ‘gay’ and lesbian adults from participating in your scouting program. Clearly, your call to end the ban on ‘gay’ Scout leaders is more about bending to cultural pressure than taking the moral high ground.

“Furthermore, those pushing for a change in the current policy are putting political correctness and greed above child safety. Such a change will force parents and community leaders to reconsider their involvement in an organization that is respected, trusted, and morally centered.”

But even supporters of lifting the ban on openly gay adult leaders are echoing some of the same themes touched upon by Walker and Perry, specifically that the debate over allowing LGBT adults distracts from the BSA’s mission.

“I’m pleased that they’re resolving it and putting it behind them,” Will Stone, the Scoutmaster of Troop 52, representing Northwest D.C. and Chevy Chase, says of the national executive committee’s actions.

Notably, Troop 52 had one of the first openly gay Scouts, Pascal Tessier, achieve Eagle rank, Scouting’s highest honor, in 2014, after the ban on gay Scouts was lifted. Tessier’s older brother, Lucien, is also gay and achieved Eagle rank, but did so while the ban on gay Scouts was still technically in effect. Even before the ban was lifted, several other members of Troop 52 and their families were vocal in their support for lifting the ban.

Stone says that all adults, regardless of sexual orientation, have been and continue to be carefully screened and must undergo youth protection training before they can be an active Scout leader or volunteer with the troop. That screening process will not change, even if the National Executive Board lifts the ban.

“I never asked about someone’s sexual orientation,” he says of the policy change. “It’s a good thing it’s being changed, so we can put it aside and move on, because it’s been a huge distraction. Now that National [BSA leadership] has the issue behind them, we can focus on what we’re supposed to be doing.”