Resolution, if ratified, would still allow religiously-affiliated troops to discriminate 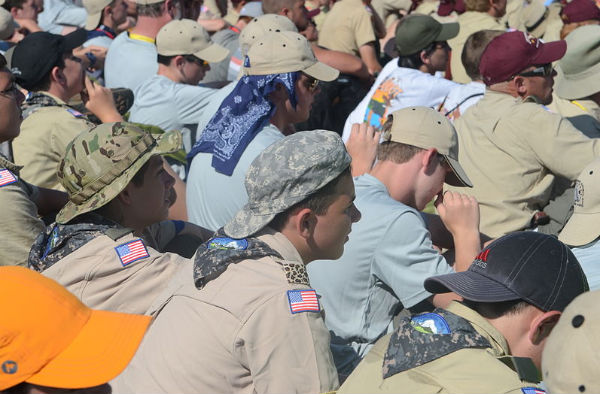 The Boy Scouts of America’s (BSA) executive committee has unanimously approved a resolution that would lift the existing ban on openly gay adult Scout leaders. The resolution now awaits a final vote by the National Executive Board on Monday, July 27 before it can go into effect.

The proposed change, which was made public on Monday, mirrors a similar policy, adopted in 2013, that ended the ban on openly gay Scouts. In a statement on its website, BSA announced that “rapid changes in society and increasing legal challenges at the federal, state, and local levels” were the reason for lifting the ban. BSA also reiterated in the statement that its youth membership policy will not change and will remain in effect, regardless of the outcome of the July 27 vote.

The current ban on adult leaders has been roundly criticized by many, including Eric Holder, the former U.S. Attorney General, and Robert Gates, former U.S. Secretary of Defense under the George W. Bush and Obama administrations, who now serves as BSA’s president. At BSA’s national annual meeting in Atlanta in May, Gates encouraged officials within the organization to seriously consider changing the adult leadership standards that presently ban out LGBT people — including parents with children enrolled in BSA — from serving as Scoutmasters, adult leaders, or even volunteers of their local chapters, known as troops.

Gates told attendees of the meeting in his speech that BSA couldn’t “ignore growing internal challenges to our current membership policy” or “the social, political and juridicial changes taking place in our country.”

“We must deal with the world as it is, not as we might wish it to be,” Gates said. “The status quo in our movement’s membership standards cannot be sustained.” Gates also announced at that meeting that BSA would stop trying to revoke the charters of troops who chose to allow openly gay adult leaders, in defiance of the ban.

Ever mindful that a significant number of troops are chartered to religious organizations such as churches or other religiously-affiliated institutions, Friday’s approved resolution will continue to allow individual troops to set their own standards regarding adult leaders. For those chartered with a Catholic church, for example, a troop could still discriminate against LGBT people based on the Catholic church’s opposition to same-sex parenting and same-sex marriage.  BSA also issued an additional memo outlining the effect of the policy change would have for religiously-affiliated organizations and the protections they enjoy under the First Amendment.

“This change allows Scouting’s members and parents to select local units, chartered to organizations with similar beliefs, that best meet the needs of their families,” the official BSA statement reads. “This change would also respect the right of religious chartered organizations to continue to choose adult leaders whose beliefs are consistent with their own.”

Following BSA’s announcement, Zach Wahls, an Eagle Scout and the executive director of the pro-LGBT organization Scouts for Equality, issued a statement praising the decision while also noting its limitations.

“Today’s announcement hopefully marks the beginning of the end of the Boy Scouts of America’s decades-old ban on gay leaders and parents like my two moms,” Wahls said. “For decades, the Boy Scouts of America’s ban on gay adults has stood as a towering example of explicit, institutional homophobia in one of America’s most important and recognizable civic organizations. While this policy change is not perfect — BSA’s religious chartering partners will be allowed to continue to discriminate against gay adults — it is difficult to overstate the importance of today’s announcement.”

John Riley is the local news reporter for Metro Weekly. He can be reached at jriley@metroweekly.com
← Previous Story Pentagon will explore lifting transgender ban
Next Story → HUD guidance protects LGBT seniors from discrimination