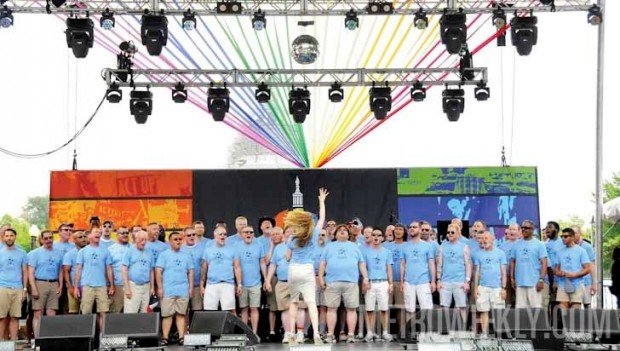 The Gay Men’s Chorus of Washington, D.C. are this week commemorating the end of an historic trip to Cuba. It comes as the Cuban embassy in D.C. reopened, flying its flag for the first time in over 50 years — a sign of thawing relations between America and the formerly isolated state.

The Gay Men’s Chorus is one of the first cultural delegations to visit Cuba since President Obama announced he would be relaxing embargoes last year. So momentous was their visit — Cuba in the past would send gay and lesbian citizens to forced labor camps — that the chorus met with the State Department and HRC to be briefed on what to expect on the ground. Speaking with The Guardian, the group detailed the plight of Cuba’s LGBT community, as well as the apparent oppression every day Cubans are still living with.

“We realized that the lyric ‘say what you want to say’ carries much more weight,” said the chorus’ executive director Chase Maggiano, “when you sing it to a bunch of Cubans who on many levels haven’t been able to say what they want to say for so long.”

Maggiano expanded on one exchange, during a Q&A following a show, in which one man asked what it felt like for the chorus when its members realized that LGBT people were gaining recognition from the government. “Because in Cuba,” Maggiano said, “even though a lot of really positive things are happening with LGBT rights it sounds like they are still not feeling heard…. It’s a delicate balance to try and push for more rights within their system and stay within what is acceptable in their government.”

Between shows, chorus members visited some of Cuba’s gay bars, which are apparently similar to American bars — complete with “very attractive” bartenders — but with much more nondescript exteriors, to deflect attention from disapproving locals. Inside, the proliferation of men willing to accept money for sex was also notable.

AJ Rawls, the chorus’ youngest member, noted to The Guardian that cosmopolitan gays were able to live better lives than those trapped in rural communities. At just 25, Rawls was born after the Cold War had ended, but even so though that “the idea of being an out gay man going to Cuba and singing for government officials… seemed like a pipe dream.

“We had a fantastic experience in Cuba,” he added, “but opening diplomatic relations is a lot easier said than done…. It’s going to take a lot of time and a lot of coordinated effort from both parties to make it work.”