Former president says everyone should have right to marry 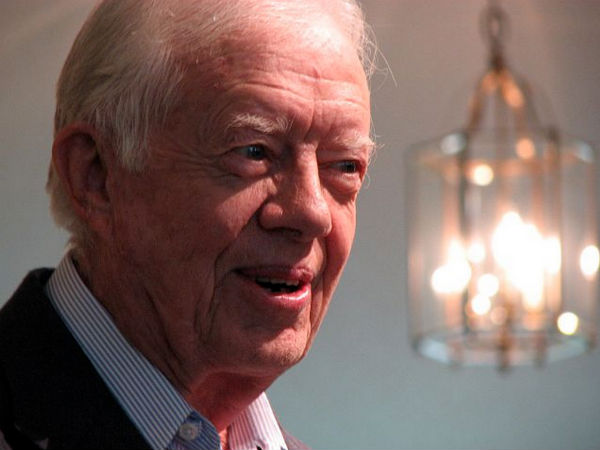 Jimmy Carter (Photo credit: Grace/I’m Not That Girl from Flickr, via Wikimedia Commons.)

The former president, known for his devout faith, told Marc Lamont Hill of The Huffington Post‘s “HuffPost Live” that he believes Jesus would have approved of same-sex marriage. Carter, who was being interviewed about his new memoir, A Full Life: Reflections at Ninety, was explaining the importance of faith in his life and having to balance it with his political obligations as president when Hill asked him whether he had a problem with the idea of same-sex marriage.

“That’s no problem with me,” Carter said. “I think everybody should have the right to get married, regardless of their sex. The only thing I would draw a line on, I wouldn’t be in favor of the government being able to force a local church congregation to perform gay marriages if they didn’t want to. But those two partners should be able to go down to the courthouse, or to another church, and get married.”

In the context of the larger interview, Carter, a born-again Christian and practicing Baptist, said faith was highly important to his life.

“My faith has been kind of the foundation of my encouragement when I was in trouble, or failed something-something, and given me a new opportunity or motivation to reach for greater things in my own life,” said the former president, who still teaches Sunday school at his local church in Plains, Ga.

Carter also added that he had never run across “any really serious conflicts” between his political life and his personal religious faith — inclusive of same-sex marriage — with the exception of the issue of abortion.

“I have a hard time believing that Jesus, for instance, would approve abortions, unless it was because of rape or incest, or if the mother’s life was in danger,” Carter said. “But my oath of office was to obey the Constitution and the laws of this country as interpreted by the Supreme Court, so I went along with that, but that’s been the only caveat.”

In a follow-up question, Hill revisited the issue of gay marriage and asked whether Jesus would have approved of it. Carter responded that Jesus would, even though he couldn’t cite “any verse in scripture” that would support that assertion.

“I believe Jesus would approve gay marriage, but that’s just my own personal belief,” Carter said. “I think Jesus would encourage any love affair if it was honest and sincere and was not damaging to anyone else, and I don’t see that gay marriage damages anyone else.”

John Riley is the local news reporter for Metro Weekly. He can be reached at jriley@metroweekly.com
← Previous Story Rick Santorum: Same-sex marriage will have “profound consequences” for the world
Next Story → Oregon establishes LGBT veterans coordinator