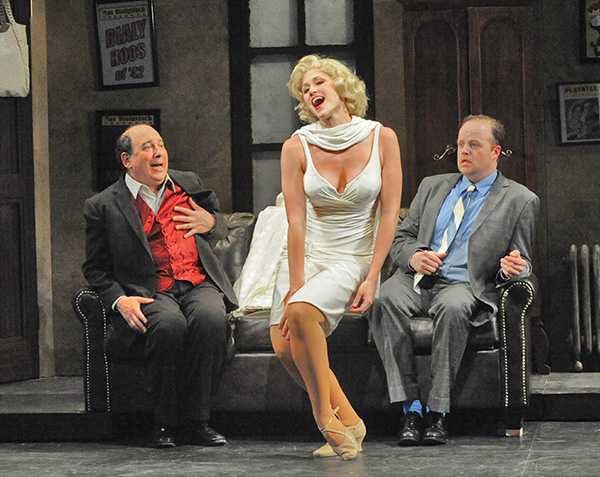 Right now, Olney Theatre, deep in suburban Maryland, is offering the region’s first production of the most-decorated show in Tony Awards history. Indeed, the original Broadway production of The Producers (

Because it’s a bitch of a show to stage.

There are a whopping 19 scenes throughout the nearly three-hour runtime, taking place in settings as varied as inside and outside a bustling Broadway theater, a grand Upper East Side townhouse, a courtroom, a prison cell and a couple of drab, utilitarian offices. At a recent performance, there were several door-slamming moments when it seemed like James Fouchard’s set was going to collapse, and there were more than a few times when the set’s many moving parts didn’t shift quickly or seamlessly.

Yet The Producers, written by Mel Brooks, who based it on his 1968 film, is ultimately a success, thanks largely to Michael Kostroff, a well-established television and stage actor best known for his work on The Wire, as the charismatic, conniving Max Bialystock. Once the “King of Broadway,” Max hasn’t had a hit show in years. So he concocts a scheme to produce an undeniable flop and pocket the money invested by a hoard of amorous little old ladies.

Michael Di Liberto is eminently likeable as Max’s eager, awkward cohort Leo Bloom, an accountant willing to risk his career in order to become a Broadway producer. The pair share perfect chemistry, and while they may not make you forget the indelible, inspired pairing of Zero Mostel and Gene Wilder, they more than hold their own.

But it’s arguably Jason Graae who makes the show sing and zing, just as his character, director-cum-actor Roger de Bris, makes Bialystock and Bloom’s Springtime for Hitler a hit, against all odds. Graae, a Broadway veteran, is as flamboyant as all-get-out in the role, and in another era, or even just another context, he might come across as offensive, swishing around, belting out a big production number entitled “Keep It Gay.” 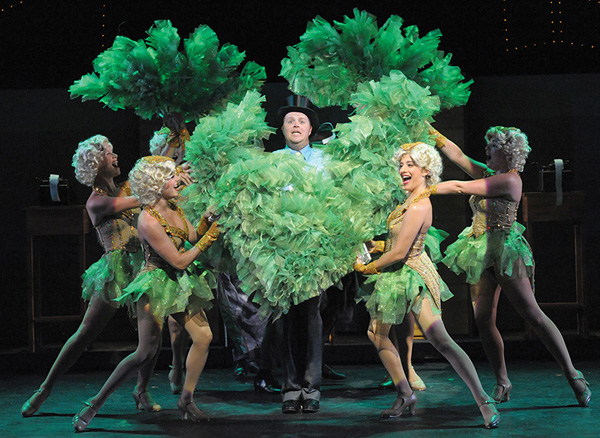 But that’s just the first act. In Act Two, he’s forced to fill in at the last-minute after the character Franz literally breaks his leg and can’t go on playing the lead in Springtime for Hitler. Graee’s portrayal of the Fuhrer is as sweet and silly as it was written to be, and if anyone could make Hitler likeable….

But those are just the three leads in a show with 29 characters and a production featuring 20 actors. Other standout performers include Jessica Jaros, a knockout as the Swedish bombshell Ulla that Max and Leo hire as their assistant, Stephen F. Schmidt, who registers in the role of Franz as earnest and eccentric yet dull, just as you’d expect from a former Nazi playwright now improbably living in Greenwich Village, and Robert Mintz as Roger’s limp-wristed assistant.

You really couldn’t ask for a show to be any more outrageous or more colorful, but you might hope that the costumes paraded out were wilder than those Seth M. Gilbert designed for the production. You might also wish for a fuller and more polished sound. Darius Smith leads the band in a way that is effective, but it doesn’t add anything extra to the evening.

And, depending on your comic sensibilities, you might long for a few more laugh-out-loud moments, too. Mel Brooks, known for the films Blazing Saddles, Young Frankenstein, Silent Movie and High Anxiety, is a master of shtick-heavy, obvious comedy that doesn’t require — or even encourage — much intellectual thought. He’s a knee-jerk comic; no knowledge of Nietzsche required. The Producers simply does what it’s supposed to do: make people laugh. And, thanks to director Mark Waldrop, it does it well enough that leave with a smile on their face. Surely that’s how audiences will feel after exiting Olney, too.

“When You’ve Got It, Flaunt It,” Ulla sings to Max and Leo in her big Act One production number. Clearly, Olney is taking Ulla’s advice and flaunting what it’s got with The Producers.

Doug Rule covers the arts, theater, music, food, nightlife and culture as contributing editor for Metro Weekly. Follow him on Twitter @ruleonwriting.
← Previous Story Allergic Reaction: The Tale of the Allergist’s Wife (Review)
Next Story → Understated: Once and Cat on a Hot Tin Roof (Reviews)