The Vanishing of Ethan Carter (Review)

The Vanishing of Ethan Carter is a gorgeous, thought-provoking game that refuses to mollycoddle players

“This game is a narrative experience that does not hold your hand.”

The Vanishing of Ethan Carter (

) wastes no time in establishing its core directive: you’re here to work. With a staunch refusal to ease players into its narrative, puzzles that demand more than the bare minimum of brain cells to be activated, a story that rewards attention and devotion, and an atmosphere that revels in carefully curated tension, this is not a game you’ll jump into to blow off steam — nor is it one that will appeal to the casual set. You’re here, literally and figuratively, to get a job done.

Vanishing is the latest in a recent trend of “walking simulators.” Think Dear Esther or Gone Home — games that utilize a first-person perspective, minimal UI and, yes, lots of walking in order to tell their narrative. In Vanishing, you’ll wander through Red Creek Valley, Wisconsin, in 1973. As paranormal investigator Paul Prospero, you’re tasked with solving the disappearance of 12-year-old Ethan Carter, who wrote to Prospero telling him of the strange visions he’d been having.

Surprisingly, that’s it. There’s no grand cutscenes, no flowery, overdone narrative exposition. Prospero states his reasons for travelling to Red Creek and, after the aforementioned warning that Vanishing won’t be holding your hand, kissing your boo boos or telling you that you’re special, the game drops you into its world.

And what a world. Vanishing originally released last year on PC, but developer The Astronauts rebuilt the game to work on Unreal Engine 4 — a requirement to port it over to the PlayStation 4. As a result, they’ve taken a game already lauded for its incredible visuals and buffed it to perfection. Every frame, every scene, every locale and every minute detail of Vanishing seems ready-made for screenshots. I can’t tell you how many times I simply stopped what I was doing and looked around at the environments I found myself in. From the grand, mountain-fringed, forested valleys, complete with glistening lakes and shimmering sunlight, to dilapidated and abandoned buildings, dark and foreboding mines, or a crumbling railway bridge that spans a gigantic gorge, the world that Vanishing offers to players is utterly spectacular.

It’s also insidious. This is a world with only one other character that can be interacted with — and believe me, in the game’s only true horror segment, he’s not someone you want to pull in for a close hug. Instead, Vanishing relies on audio cues — including an incredibly effective soundtrack, which flits between mesmerizingly pretty melodies to accompany the beautiful scenery, or tense, creeping strings to raise heart rates when Prospero ventures into a heavily wooded area, or strays too close to something dangerous. That Vanishing spends most of its time outdoors in warm evening sunlight and yet can instill such a sense of foreboding is testament not only to its incredible world design, but the sound engineers who helped bring that world to life. 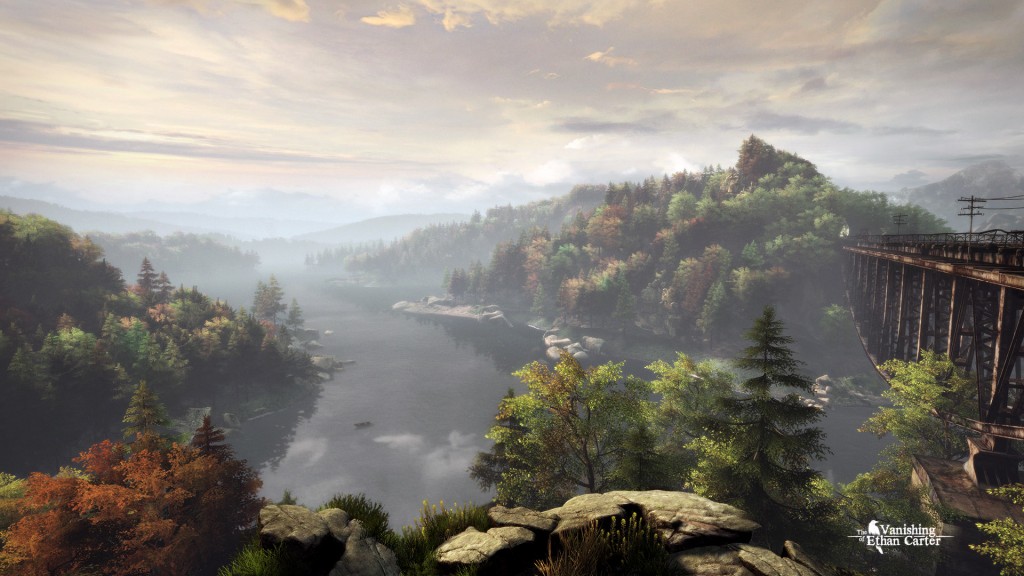 That Vanishing spends most of its time outdoors, in warm evening sunlight and can instill such a sense of foreboding is testament to its design.

Of course, in your first hour, Vanishing is quick to remind players of the fragile nature of life. Prospero possesses supernatural abilities, allowing him to identify clues and determine events that others wouldn’t normally be able to see. Touch a dead body, for instance, and Prospero will be presented with a fragment of that person’s memory. Uncover clues by exploring the vicinity of their corpse and Prospero will gradually unlock a chronology of their death, which can be explored to learn precisely what led to their demise. It’s not all death and murder, however — Vanishing‘s first three puzzles find you uncovering a series of deadly animal traps (which provide the game’s first jump scares), solving a grisly murder (hello, severed legs and cracked skulls) and heading into space. Yes, really.

It helps that the game’s narrative is kept to the flashbacks uncovered after successfully solving a puzzle or investigation, or to the documents, newspaper clippings or drawings by Ethan Carter that are strewn around the world. Ethan’s family is slowly being possessed by a “sleeper,” a demon that’s causing them to do unspeakably horrific things to one another — or to themselves. Ethan, the only one unaffected, is determined to put a stop to this mysterious force, despite his family’s attempts to stop him — even if that means ending his young life.

As players work through the game’s brief length — you’ll finish Vanishing in an afternoon — they’ll gradually unravel the story, learning about each character, their motivations, the history of Red Creek Valley. Prospero himself will comment on events, including the nature of American capitalism and its effects on rural communities as he walks past a long-forgotten train station. Vanishing‘s ending is satisfying — though left somewhat ambiguous — but its your experiences playing through the game that will last long after the story has faded.

It helps immensely that controls are limited to just four buttons. Vanishing economizes its controls in order to put narrative and exploration front and center. Get lost in impossible button combinations and it would drag players from their immersion. Instead, Prospero can interact with objects, crouch (which I used just once in my entire playthrough), zoom in on objects, and run. That’s your lot. Using those four simple interactions, players are tasked with a variety of puzzles as they uncover the game’s various mysteries. The puzzles themselves offer a wide range of scenarios to work through, though my personal favorite took place in a secondary scenario, nonessential to finishing the main story. Inside a ruined house, you’ll be tasked with rebuilding the interior by looking through doorways and swapping the rooms around until you find one that fits. It was interesting, it was clever, it was beautifully presented — three things Vanishing excels at. 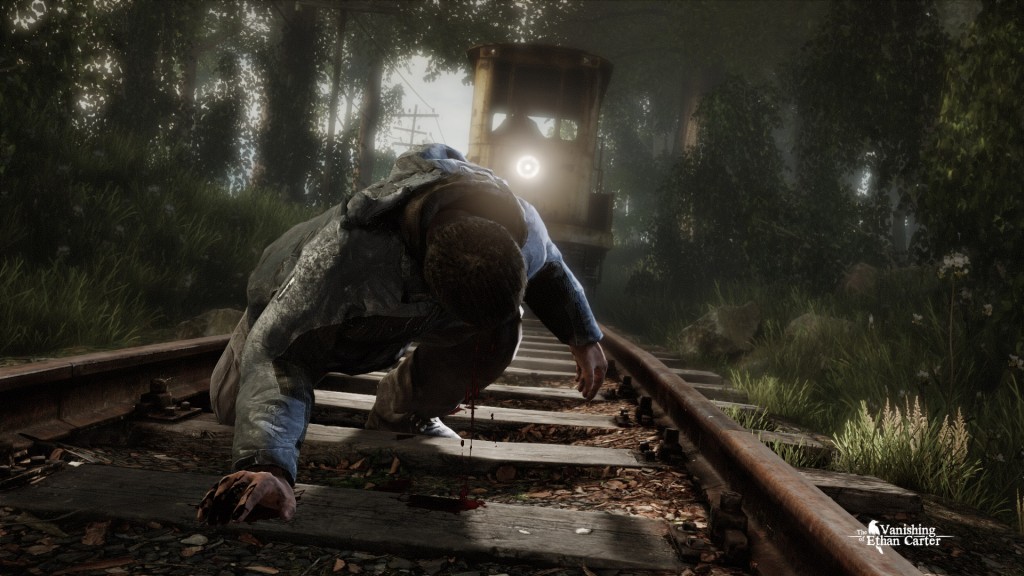 It’s not kidding when it says there’s no hand-holding — this is your world to explore, at your own pace, to the best of your abilities, for better or worse.

While Vanishing isn’t a difficult game, it’s clear that the traditional cues and hints that other puzzle games offer are nowhere to be found. It’s not kidding when it says there’s no hand-holding — this is your world to explore, at your own pace, to the best of your abilities, for better or worse. To emphasize how little Vanishing tries to control your playthrough, I completely missed the game’s first puzzle area. I walked straight past and out over its dilapidated railway bridge, too consumed in beauty to stop and pay attention to potential leads. Other scenes are more obvious — a massive trail of blood will always catch your eye — but it’s testament to the developer’s vision that they make it so easy to miss parts of the game’s story unless you fully commit to exploring the game’s world.

Arguably the game’s hardest section — and certainly its biggest tonal shift — comes when Prospero follows Ethan’s trail into an abandoned mine. It’s here that the tension created by Red Creek’s eerie quiet becomes full-blown horror. Dark, suffocating tunnels, flickering lights, ominous music. It wants you to be terrified as you creep through this section — and for the faint of heart, it can certainly deliver, during a somewhat frustrating puzzle that employs genuine jump scares and a game of cat-and-mouse.

Even with a rather abrupt descent (literally — because who doesn’t love abandoned mine shafts?) into horror, Vanishing still managed to worm its way into my heart. At $20, it’s perhaps asking a little too much for the length of gameplay on offer — there’s little reason to return to it after the main story has closed. But for what little time you’ll spend in Paul Prospero and Ethan Carter’s world, the payoff is immense. Whether it’s the sheer beauty of Red Creek Valley, the wonderful audio design, the smart, DIY nature of the puzzling, or the satisfaction in uncovering the mysteries of this strange place, The Vanishing of Ethan Carter is a game that anyone who favors quiet, engrossing experiences will love.

The Vanishing of Ethan Carter is available on PS4 and PC. PC owners will gain a free upgrade to the PS4’s updated game engine in the coming weeks.