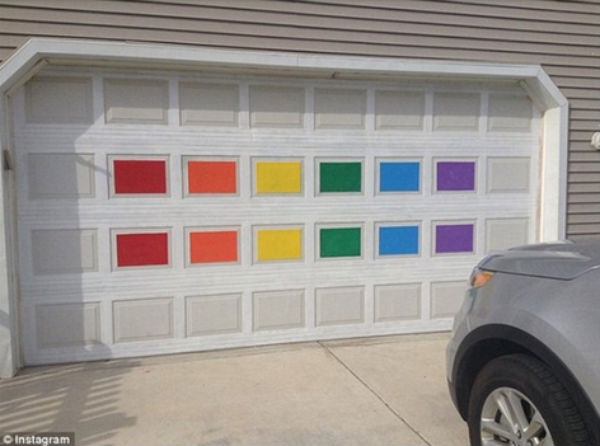 A New Jersey family is earning praise from all over the globe after painting their garage with rainbow colors in order to demonstrate solidarity with their two bisexual daughters.

As reported by The Press of Atlantic City, the DeLong family of Villas, N.J., awoke one morning to find that someone had spray painted the words “I’m Gay” on the front of their garage. Both of the DeLong’s daughters, 17-year-old Miranda and 14-year-old Emily, are openly bisexual.

After filing a report with police, the family began to clean up the graffiti. They realized that the vandalism had ruined their garage door. As a result, it would have to be repainted. After a friend suggested painting the door with glitter, the family, led by mom Erin, decided to paint the door panels with rainbow colors.

“We were really positive about it,” Erin DeLong told the Press about accepting her daughters’ sexuality. “It doesn’t change who they are as people. They’re good kids…. Why have kids if you’re not going to love them for who they are?”

After painting the garage rainbow, the DeLongs posted an account of the vandalism to STOP-Homophobia.com. The story was shared on social media and went viral, attracting praise for the the DeLong’s acceptance of their daughters.

In an interview with The Huffington Post, DeLong said that most people have been supportive, although some neighborhood kids have yelled anti-gay epithets at her and her family, and her nine-year-old son has been teased for having bisexual sisters.

“We just try to let it roll off our backs,” DeLong said of her reaction to those making the disparaging comments, who she notes are in the minority. “What they do says more about their character than ours.”

John Riley is the local news reporter for Metro Weekly. He can be reached at jriley@metroweekly.com
← Previous Story Robertson: ‘Stay away’ from gay-supportive Christians
Next Story → LGBT candidates perform well in Utah primaries