Announcement follows investigation into whether online fundraising campaign was a hoax 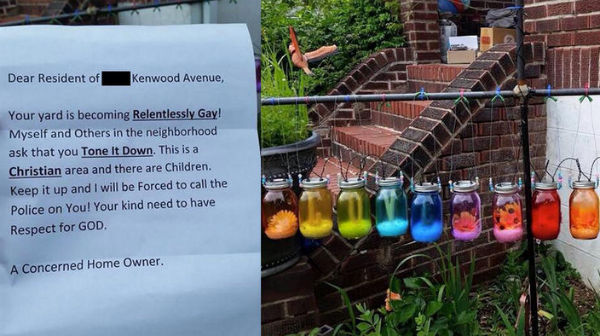 The Baltimore-area woman who raised more than $43,000 through the online fundraising site GoFundMe will be returning people’s donations, citing “taxes and an overabundance of reasons.” Julie Baker, of Overlea, Md., wrote a post on her GoFundMe page on Tuesday, in which she promised to return the money she had raised to help make her yard even more “relentlessly gay.”

Baker had initially taken to the site claiming she had received an anonymous note that asked her to remove a rainbow jar solar light display in her backyard.  Baker opted to go the opposite direction, and make her yard even more gay, and requested donations. People began to suspect Baker might be perpetrating a hoax. The online LGBT site Queerty, in particular, noticed that the style of the letter, using improper capitalization, was similar to Baker’s writing on her GoFundMe and Facebook pages. Baker responded by making her profile private.

Snopes.com confronted Baker about her claims, noting  Baker had not purchased additional decorations for her yard. Baker claimed that she had done nothing wrong. Yet, as of Wednesday, her GoFundMe page had been taken down. The Baltimore Sun reports that Baker said the campaign was never about the monetary donations. She asked those who made donations to take them back and give instead to local artists or educational organizations.

“If a time machine were available, it would have all ended at the original requested amount,” Baker wrote in her final post. “It was never about the money, but being happy in the face of intolerance.”