Combined with its stellar stealth-puzzle gameplay, Volume is an engrossing, enjoyable experience

It’s somewhat telling that in this generation of gaming we seldom look to large studios for innovation. In a time of yearly updates and well-worn franchises, it’s often smaller, more creative studios and indie developers that are producing the most interesting and unique titles for gamers to enjoy.

Mike Bithell is one such success story. The British games developer released his debut effort, Thomas Was Alone, as a free browser game. Reception was sufficiently positive that he transformed his geometric platformer into a full-fledged release, which ultimately sold over a million copies and won an award from the British equivalent of the Academy Awards. It took simple, square shapes, assigned them distinct personalities, and wrapped that in an enjoyable, challenging experience.

Many were curious to see what Bithell’s sophomore release would be. As it transpires, Volume (

) isn’t something utterly unique. Instead, it takes inspiration from several games and genres. It especially owes a great deal of its existence to Metal Gear Solid — in particular, the stealth-action series’ VR Missions, which strip away the extensive world-building in favor of simple, clean, isometric aesthetics and streamlined stealth sequences.

Volume also derives its story from Robin Hood, the classic folktale of an English outlaw who robbed from the rich and shared the wealth with the poor. In Volume‘s universe, we find ourselves in England in the middle of the 21st century. England has become its own nation state, separate from its Scottish and Welsh neighbors. It is a corporatocracy, ruled by the CEO of the country’s largest weapons and defence manufacturer, Guy Gisborne (based on Sir Guy of Gisbourne in the original Hood tales). English society has been strictly divided into three distinct classes: an elite ruling class, the working populace, and those who protect the interests of the elite. Stature is defined by birth — if you’re born into the poor working class, you’ll remain there. Slavery is rife, corruption is a way of life, violence is a constant threat, surveillance is mandatory. Travel is severely limited and international neighbors leave Gisborne alone thanks to carefully arranged and monitored trade deals.

Enter our protagonist, Robert Locksley (Robin of Loxley, in Hood’s tale), a disaffected youth born into the semi-privileged Protect class. He despises Gisborne’s controls on society and longs for freedom. After breaking into an old training center for Gisborne’s troops, which used virtual reality and holographic projections to simulate combat zones (think Star Trek‘s holodeck), Locksley hacks an old computer AI system, erasing its memory and programming it to help him livestream Gisborne’s downfall.

Yes, Volume is essentially one giant Twitch stream. Locksley and Alan, the AI program, recreate the interiors of strategically important buildings — Gisborne’s offices, the homes of his staff, the checkpoints at travel zones, military prisons etc. — which Locksley then navigates to show his viewers across England the best way to steal data, valuables and weapons from the ruling elite. It’s Robin Hood in the digital age, except Locksley is using an entire, disaffected underclass to help him break into these places, rather than do so himself. 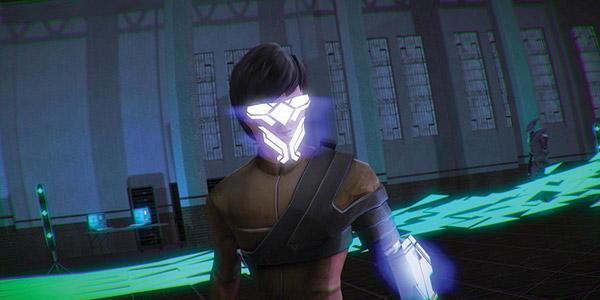 What’s perhaps most impressive is that Volume tells this story through very limited interaction. Text documents are interspersed among levels, revealing snippets of information from the creation of Gisborne Industries in 2014 through to Gisborne’s ultimate rule of the country forty years later. Clips from newspaper articles, excerpts from webchats, emails between colleagues, group chats and more reveal in non-chronological order the tensions and influences that led to the current system, including a growing English nationalism and a civil war between city states that ultimately allowed Gisborne to take control.

Volume is unashamedly old-school in its interpretation of stealth. Shadows are obvious, items are highlighted, objectives are clearly marked, checkpoints are frequent to help with mistakes.

Above all of this are the exchanges between Locksley, Alan and, eventually, Gisborne himself. They’re voiced by Charlie McDonnell (a successful English YouTuber and filmmaker), Danny Wallace (who won the award for Thomas Was Alone) and Andy Serkis (Gollum in Lord of the Rings and many other motion capture roles). Wallace turns in another incredible performance as Alan, a self-aware AI who initially resists Locksley’s efforts against his creators, then helps him, then eventually helps Locksley come to terms with the gravity of his actions. Serkis is dominating and stern as Gisborne when he eventually cuts into Locksley’s feed. McDonnell is perhaps the lone standout who feels not miscast, but misdirected. His Locksley is too calm, too robotic at times — while the script has some great dialogue, there were moments when I wanted Locksley to at least match the emotion of his digital companion, rather than sound like a mildly apathetic teen.

In play, Volume quickly finds its footing as another stellar entry by Bithell. He clearly knows how to shape a game — anyone who played Thomas Was Alone will be familiar with the steady drip feed of new gameplay additions and the gentle slope of its difficulty curve. Fans of modern stealth games might be disappointed, though. Volume is unashamedly old-school in its interpretation of stealth. Enemies have visible “cones” of vision, letting the player clearly see when Locksley will be discovered. Shadows are obvious, items are highlighted, objectives are clearly marked, checkpoints are frequent to help with mistakes. 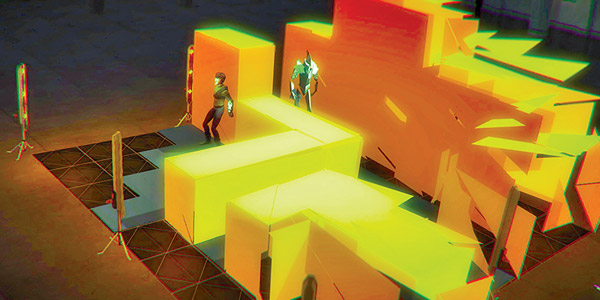 Instead, Volume is more puzzle game than stealth game. Each of its 100 core levels is a puzzle — Locksley must enter, collect a certain number of gems (Alan’s representation of whatever data/valuables are stored at the real world location) and exit without being shot or hacked to death by guards. How you do that is up to you, for the most part. Volume provides the tools, but many levels have several ways to achieve your objective.

Locksley has a standard arsenal of moves and gadgets at his disposal. Combat, at least in a traditional sense, is not on the agenda. He doesn’t wish his viewers to harm others — that would defeat the point of rebelling against Gisborne’s violent regime. Instead, players can utilize a variety of distracting, concealing and incapacitating weaponry. Two rely on audio cues, drawing an enemy’s attention, useful for sneaking past a rather stubborn-placed guard. Some help shield Locksley from prying eyes — making him temporarily invisible, masking his footsteps from pressure plates, or providing an ephemeral disguise. Others allow Locksley to stop a guard in their tracks, whether distracting them with something shiny, knocking them out with a trip wire, or stunning them with the Blackjack projectile, my personal favorite. Every gadget has a respawn time, so players can’t spam invisibility or projectiles — it requires extra thought and planning, which only adds to the tension of certain encounters. Of course, when all else fails Locksley has a classic staple of stealth games: a simple whistle to gain a guard’s attention.

Where Volume really excels is in utilizing the mixture of gadgetry and enemies at its disposal over its 100 levels. Though it constantly introduces new obstacles — guards with further vision or 360-degree sight, or perhaps electrocuting floor panels and alarm-activating lasers — it also mixes up what gadgets (if any) you’ll be given to accomplish your objective. It never settles into a familiar pattern. As players crouch around low walls, hack into obstructing gates, or find keys to unlock new pathways, they’ll be tasked with finding new and smarter ways to avoid the gaze — and gunfire — of Gisborne’s henchmen.

If there’s one criticism, it’s in Volume‘s checkpoint system. Checkpoints are frequent, which in some scenarios can be a lifesaver. Narrowly avoiding simulated death only to run through a checkpoint can be a huge relief, but all too often it’s entirely possible to abuse Volume‘s checkpoints for gain. At certain points, rather than sneak or use gadgets players can simply run past guards, attracting their attention, en route to a checkpoint. You’ll almost certainly die unless there’s a locker, floor panel or dark shadow to hide in, but it doesn’t matter. If you cross that checkpoint and immediately die, you’ll respawn there and the guards will have returned to their normal patrols. Volume isn’t a difficult game; it can be head scratching at times, but it never frustrates. That only makes its checkpoints all the more apparent as a definite weak spot in an otherwise stellar puzzle experience.

Competent players will easily finish Volume‘s story in a few hours. Each level lasts at most four or five minutes, but thankfully replayability is high. Players can try out differing methods of attack, or even choose what gadgetry to use — some levels offer multiple options. Each level is also timed, with a par score to aspire to, though I easily beat it on a majority of levels. What won’t be easy to beat are the online leaderboards. Already, players are racking up incredible times on levels I spent one or two minutes blankly staring at before figuring it out.

If that’s not enough, Volume also includes a full level editor. Players can create their own challenges for themselves, or upload them for other gamers to enjoy. Again, there are already a lot of levels to choose from — though quality is understandably highly variable. To aid in finding the best submissions, Bithell and co. will highlight staff picks on a regular basis. Once the initial 100 levels have been exhausted, there’s a lot of reasons for players to keep coming back to Volume on a regular basis.

Volume aims high with its narrative. Locksley is an intriguing protagonist, its world and lore are fascinating to uncover, and the interaction between Alan — pragmatic, inquisitive and reasoned — and Locksley — passionate, disillusioned, self-assured in his actions — constantly shines. If I had a complaint, it’s that I wished there was more to its story. More text documents to find, more voice work, more of the near future England it depicts. Speaking of which, its graphics may adhere towards the simple end of the spectrum, but they’re never anything less than lovely to look at, mixing colors and shapes into an indelible experience. It’s all sweetened by David Housden’s wonderful score.

Combined with its stellar stealth-puzzle gameplay, Volume is an engrossing, enjoyable experience. Its brevity and initial simplicity melt away to reveal a game that, while perhaps not as unique as Thomas Was Alone, is just as fresh and satisfying — and certainly as deserving of your time.

Volume is available on PC and PS4, with a PS Vita release expected soon.