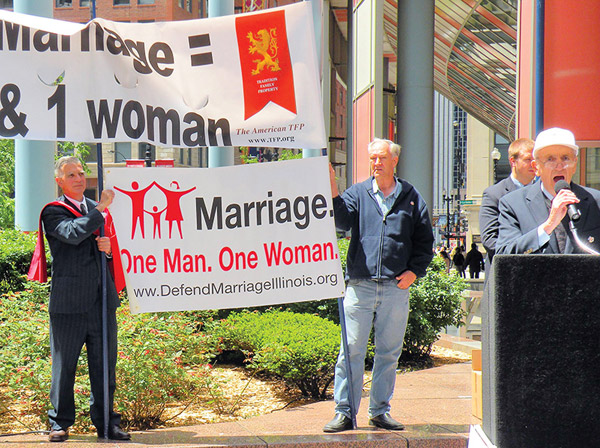 No matter what one’s beliefs on marriage are, it’s becoming clear that the Supreme Court will not have the final word on the issue.

With marriage equality nationwide, same-sex couples are now able to be recognized as legal spouses. But some states are pushing back, seeking ways to allow people who oppose same-sex nuptials to refuse to provide services or take any actions that could be viewed as supporting same-sex weddings.

The pushback began with North Carolina in June, prior to the Supreme Court’s decision. That month, the North Carolina legislature voted to override a veto by Gov. Pat McCrory, thereby allowing state officials to recuse themselves from performing or issuing licenses for marriages that they feel violate their religious beliefs.

Under North Carolina’s bill, a magistrate or register of deeds can cite their religious beliefs as justification for recusing themselves. But the bill also allows alternative arrangements to be made in order for couples to obtain a marriage license without violating the magistrate or register’s personal beliefs.

A similar conflict has already come to a head in Kentucky, where three separate counties have stopped issuing marriage licenses to anyone, gay or straight, in order to avoid running afoul of the Supreme Court’s decision. Instead, officials in those counties are referring prospective spouses to travel elsewhere within the state to obtain a license. One of those clerks, Rowan County’s Kim Davis, has now been sued by two straight couples and two gay couples for her refusal to issue them marriage licenses in the county where they live, work and pay taxes.

Davis, an Apostolic Christian, previously argued in court that she should be protected by the First Amendment from having to issue licenses to same-sex couples. However, she also argued that even allowing licenses to be issued in her name also violates her religious beliefs — even if another employee actually grants the licenses.

“If I say they are authorized, I’m saying, ‘I agree with it.’ And I can’t,” Davis was quoted by USA Today as saying during her testimony in court.

The lawsuit against Davis has attracted a great deal of attention and has already become an issue in the 2015 governor’s race, with opponents of same-sex marriage using the issue to attack Attorney General Jack Conway (D) for his refusal to defend the state’s ban on same-sex marriage after it was found unconstitutional. Additionally, Republicans in the state legislature have introduced legislation for the 2016 session that is aimed at protecting county clerks like Davis from legal action if they refuse to issue licenses by citing their religious beliefs. That bill would also clarify existing First Amendment protections for clergy who want to refuse to perform same-sex marriages, even though no such conflict has arisen in the Bluegrass State.

But that debate is precisely what should be happening when there are conflicts between LGBT rights and religious beliefs, says Ryan T. Anderson, a senior research fellow specializing in issues related to marriage and religious freedom for the Heritage Foundation, a conservative think tank.

“So RFRA says ‘a sincere religiously-held belief,’ if the government burdens it, it has to be for a compelling government interest, in the least restrictive way possible,’ Anderson says.

“Then there’s the First Amendment Defense Act, which says we’re going to have a very specific belief — in this case, the belief that marriage is between a man and a woman — and we’re going to say that the government can never burden that belief,” he continues. “For the first 225 years of our nation’s history, people have been free to run their schools and charities and businesses in accordance with that belief…. We don’t need to force civil society…into violating those beliefs.”

With regards the Kentucky conflict, Anderson notes that Title VII provides explicit protections for government employees based on their religious beliefs, and requires the government to try to accommodate those beliefs as best it can.

“The idea here is that every citizen has a right to get from the government whatever the benefit is,” Anderson says. “So the benefit in question is a same-sex marriage license. Marriage now includes same-sex couples. They now have a right to go to the government and get a marriage license. That doesn’t say that each and every county clerk needs to be the one providing the license.”

“Forty-eight years ago, I heard all this crap when the Supreme Court said you couldn’t ban interracial couples.”

That is exactly how the situation was resolved in North Carolina, with the ‘opt-out’ bill protecting magistrates and registers of deeds by allowing them to notify their superiors that they will no longer be performing or issuing licenses for any marriages.

“What Title VII protects, and what these bills protect is a reasonable accommodation that ensures that every citizen receives what they’re guaranteed by the state, but that also accommodates employees,” he says. “But if it’s a county clerk’s office of 20 clerks, and two of them say ‘We can’t do this,’ then I see no reason why the state shouldn’t say, ‘Fine. You guys are going to be doing something else, and the other 18 are going to be doing the marriage licenses.’ And I think that’s a way that we can sort of move past some of the culture wars on this…. When we can work those things out, I feel we should. When it’s impossible to do, then the government interest prevails.”

But Sarah McBride, a research associate for LGBT progress at the Center for American Progress, says resolving the issue is not as simple as supporters of RFRA-style laws claim. For instance, the federal RFRA law — on which most of these bills are allegedly based — needs to be clarified.

“One of the things we heard from advocates on the state level who were trying to push these RFRAs was that they were identical to the federal RFRA,” McBride says. “But at this point, after the corrupting decision in Hobby Lobby, in terms of religious freedom, the federal RFRA really needs to be addressed. Because based on the current court’s interpretation… [it] is way too broad and grants too many for-profit companies religious rights.”

Another problem, McBride says, is that even if the federal RFRA is clarified, many of the bills purporting to be “identical” to the federal law actually aren’t.

“A number of these bills, what we’re calling Super-RFRAs, not only took the federal RFRA, but expanded its scope and removed a lot of important words that restrained the ability of people to impose harm on others,” she says. “In some states, the burden [on a person’s religion] just needs to be hypothetical, not actually real.”

One such state where so-called “religious freedom” legislation is expected is Virginia. There, Republicans have signaled that passing protections for individuals and businesses who object to same-sex marriage or LGBT rights will be an important priority during next year’s legislative session.

Speaker Bill Howell (R-Stafford) and Senate Majority Leader Tommy Norment (R-James City) last month asked the Virginia Code Commission to review the Code of Virginia and see what updates or changes need to be made to bring the language commonwealth’s various statutes into compliance with the Supreme Court’s ruling. Requests for comment from Gilbert’s office on what an ideal religious freedom law might look like were not returned.

Earlier this year, Del. Bob Marshall (R-Manassas) introduced two bills dealing with religious freedom that would have provided protections for government contractors, such as adoption agencies, and for businesses or any person licensed by the state from a teacher to a doctor, to deny services to LGBT people. Some LGBT advocates have hypothesized that any such “religious freedom” legislation may mirror Marshall’s bills, which were both defeated by Republican-led House subcommittees.

Matthew Moran, a spokesman for Howell’s office, says it is very early in the process and that nothing concrete has been proposed. He also adds that Howell wishes to take a “measured approach and do all due diligence before we take action,” while also ensuring that individuals’ religious freedoms as guaranteed by the First Amendment continue to be protected.

However, Senate Minority Leader Dick Saslaw (D-Springfield) rejects the idea of Republicans campaigning on the issue of religious exemptions for those who oppose same-sex marriage.

“Forty-eight years ago, I heard all this crap when the Supreme Court said you couldn’t ban interracial couples,” Saslaw says, referencing the decision in Loving v. Virginia. “I used to hear this all the time. And many of them couched it in religious terms.

“There were people, after the vote on the public accommodations law, the Civil Rights Act, that said, ‘This is my right, not to serve people I don’t want.’ Well, you hold yourself out for a public business,,” Saslaw continues. “Do you honestly think that anybody is going to go to somebody who they know is hostile to who they are and say, ‘Do you want to participate in or cater my wedding?’ That’s absurd. Think about the common sense behind that.”

Saslaw adds that he thinks campaigning for the right to discriminate against LGBT people would be “a political blunder of massive proportions,” but will let Republicans decide for themselves if they want to make that their main priority.

“If you want to campaign on bigotry, go ahead,” Saslaw says. “The public’s too smart for that. They’re going to see you for what you are.”

John Riley is the local news reporter for Metro Weekly. He can be reached at jriley@metroweekly.com
← Previous Story American Foundation for Equal Rights to close down
Next Story → Houston LGBT ordinance heads to ballot for voter approval