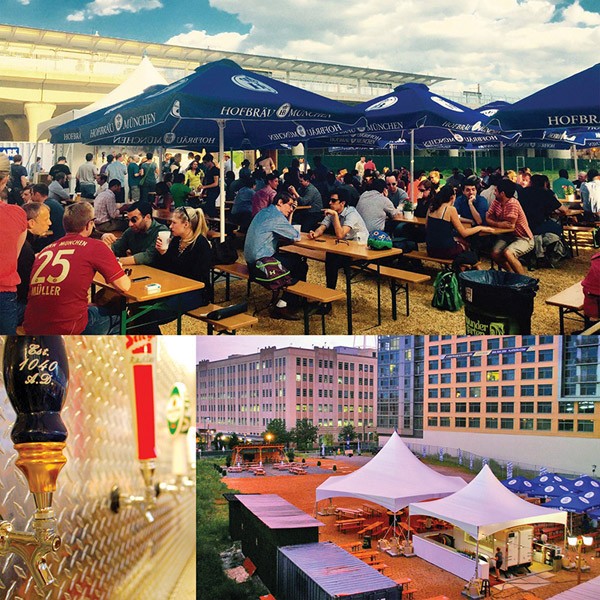 “You can’t serve German beer with a French name!”

Christopher Lynch is adamant about his reason for not extending the name L’Enfant Cafe — the restauarant he co-owns with Jim Ball — to his newest venue, Wunder Garten, in D.C.’s newly thriving NoMa region.

All next week, the city’s newest, largest beer garden will celebrate the German, beer-focused festival Oktoberfest. And on Wednesday, Sept. 30, the venue will celebrate the LGBT community with a can’t-miss gay night: Sausage Fest.

As with every other night during the seven-day event, Sausage Fest partygoers can drink from 12 taps serving mostly German beer, including several special Oktoberfest brews. And Capitol Hill’s Cafe Berlin will be on hand to dole out sausages, as well as other German staples, including schnitzels and soft pretzels. There will be a DJ-in-the-round and other surprises.

The festivities will take place in a pop-up beer hall, a circus-like tent with a huge entry archway that calls to mind Munich’s Oktoberfest. With help from a German friend serving as an “inspiring partner,” Lynch is working hard to make the experience “as authentic as it would be in Germany.”

Aiding in that authenticity: Games. Including a dirndl race.

“Dirndl is the female version of lederhosen — the Heidi dress,” Lynch says. “Competitors race around the stage, holding a stein of beer in their cleavage. The person who gets around the most and has the most liquid in their mug at the end is the winner.”

There is no cover charge for the evening, which is co-produced by Metro Weekly.

Lynch opened Wunder Garten with Ball at the beginning of summer, becoming the first establishment apart from a Hilton Garden Inn to have an on-premise liquor license in NoMa. He expects Wunder Garten to remain open as late as November, depending on the weather, in its current temporary site — a parking lot down the block from a Harris Teeter and immediately next to the NoMa-Gallaudet University Metro stop on the Red Line. Condominiums are scheduled to be constructed on the property in the near-future. Lynch is working to find a more permanent, year-round location in the neighborhood.

“There’s a notable gay presence in NoMa,” Lynch says, adding that about a quarter of the customers are gay. But next week’s Sausage Fest will be Wunder Garten’s first official full, all-gay blowout. And though the garden must close by 10 p.m., Lynch encourages patrons to make their way to L’Enfant Cafe for a La Boum-style after-party.

After all, some will want Sausage Fest to go all night.

For more information on the full slate of Oktoberfest activities or to purchase tickets for the events held Friday, Oct. 2, and Saturday, Oct. 3, visit wundergartendc.com.