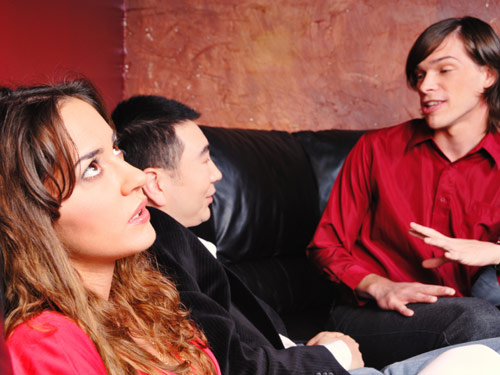 A couple weeks ago I was doing some work with a woman who’s much younger than me, as well as much more knowledgeable about what we were doing. I hope it comes as no surprise that I have no problem with this — age brings wisdom but that doesn’t mean everyone under 40 is an idiot.

I got called away and when I returned she was fielding questions from a white guy, about my age, who immediately turned and started directing his questions to me. I thought it was weird that, even though I was saying phrases like “I don’t know,” he kept asking me new ones and not taking the obvious hint to ask the well-versed person standing next to me.

After this was over I promptly forgot about it until the next day when she brought it up, only half-jokingly, that the guy obviously had a problem asking a woman for information.

The click of sudden understanding in my head may have actually been audible to those around me. I knew something was weird about the conversation but I was thinking, “Why is he asking me these questions?” instead of the more relevant point, “Why isn’t he asking her?”

I asked her if it happened a lot. “All the time,” she said.

So, yes, I got another realization of the unearned privilege that often comes with being a man (particularly a white one). Here I am having written all these times about being conscious of my own privilege when it comes to race, yet this not-so-subtle misogyny flies right by me. I asked my sister, who works in a male-dominated industry back in Kentucky, if the same thing happens to her. “Are you kidding?” she said. “All the time.” My mom, who works in healthcare, told me the same thing.

All the time. Think about that the next time you roll your eyes or give an exasperated sigh when someone not like you mentions discrimination or micro-aggressions or some other symptom of the privilege that permeates our culture. Yes, some people are oversensitive. But most aren’t.

“It’s easy to be blind to your own privilege even when you know you have it.”

That’s the thing about privilege. It’s hard to see it when you have it, which makes it harder to understand when other people point it out.

Another case in point: My husband Cavin and I have been together for more than a decade, so we’ve been out to dinner at restaurants many, many times. Because I am a lucky man, Cavin’s the one who usually pays. So most dinners end with the server handing the check to me, the white guy, and me handing it to Cavin, the Asian guy.

I’m embarrassed to say that this didn’t really click for me until early spring of this year. But once I saw it I can’t stop seeing it. No matter what I do — limiting my talking to the waiter, being obviously deferential to Cavin, getting up and going to the bathroom after the plates are cleared — the check gets placed in front of me, not Cavin or in the table’s neutral zone. I’ve asked Asian friends if this happens to them when they go out to eat with a white friend, date, or spouse.

You guessed it, all the time.

The exception that proves the rule: Vietnamese restaurants where Cavin speaks to the staff in Vietnamese and I sit there like the idiot who has only learned enough of the language to ask for shrimp or beef. Those servers know who’s in charge.

The point is, it’s easy to be blind to your own privilege even when you know you have it. I’m guessing that’s why Matt Damon made a fool of himself this week lecturing a black woman filmmaker about how diversity works. That’s not a defense of Damon, it’s an encouragement of calling him on it. If the woman I work with hadn’t called me out — however indirectly — I wouldn’t have seen it. And I’d be worse for it.

When you have privilege — as a man, as a white person, as a wealthy person, as an educated person — you have the responsibility to see and understand your privilege. Because everyone else has to live with the results of it all the time.