By John Riley on October 28, 2015 @JohnAndresRiley 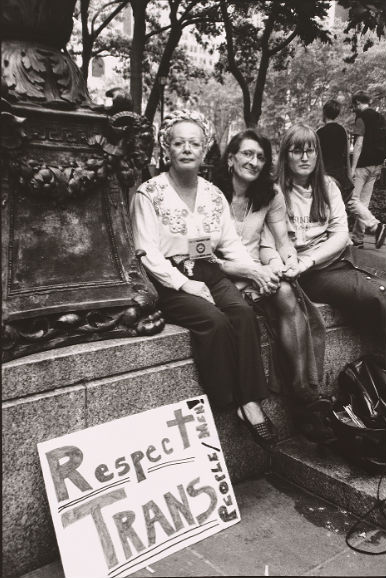 Transgender activist Sylvia Rivera, one of the leaders in the early days of the LGBT rights movement, has become the first transgender person to have their photo added to the Smithsonian’s National Portrait Gallery.

Rivera, best known for her participation in the Stonewall riots that are often credited with bringing the struggle for LGBT rights to the wider public’s attention, had previously been kicked out of the house by her parents for her gender identity. While working as a prostitute, Rivera came to participate in the demonstrations surrounding the police raid of the Stonewall Inn.

Ana Perry, a former Latino Museum Studies Fellow for the Smithsonian, wrote on the museum’s blog about the addition of Rivera’s photograph to its collection. Perry quotes Rivera as saying, in 1998, of her decision to found STAR House: “Marsha and I decided it was time to help each other and help our other kids. We fed people and clothed people. We kept the building going. We went out and hustled the streets. We paid the rent.” Perry describes Rivera as being a mother to the many of the residents of STAR House, despite only being 19 years old herself.

Perry also notes that organizations like the Sylvia Rivera Law Project, which advocates on behalf of transgender rights, is carrying out Rivera’s legacy by providing legal services for those who can otherwise not afford representation.

Rivera’s portrait will appear in the National Portrait Gallery’s “Struggle for Justice” exhibition. The black-and-white portrait, taken by Puerto Rican photographer and Visual AIDS member Luis Carle on the Saturday before New York’s Gay Pride celebration in 2000, shows Rivera seated with her partner, Julia Murray, on the right, and fellow activist Christina Hayworth on the left. The placard at their feet reads “Respect TRANS, PEOPLE/MEN!,” acknowledging the cause to which Rivera dedicated her life. Rivera previously served as the keynote speaker at New York’s 1994 Gay Pride, marking her legacy as an important figure in the early days of the LGBT rights movement after spending nearly two decades without being acknowledged for her work.

John Riley is the local news reporter for Metro Weekly. He can be reached at jriley@metroweekly.com
← Previous Story The Academy of Washington closes
Next Story → Gloucester County transgender student gets support in appeal