Nintendo has a very specific ability. It’s something of an expert at creating experiences you’ll want to play, but not necessarily ones you’ll switch console allegiances for. Now, that’s a bold statement — and it certainly doesn’t ring true for staple franchises like Mario and Zelda — but for the vast majority of content that Nintendo feeds to its systems, gamers on rival platforms will look, covet, and then move on.

That’s a problem, not least when the Wii U, Nintendo’s flagship home console, is lagging behind its competitors in sales — despite a year’s head start. Nintendo needs its big, flashy franchises to pull gamers to pick up a Wii U, even as a second system. This year they’ve had a few, but leading into the holidays Nintendo’s cupboards are definitively more barren than Sony’s — except Sony has the luxury of numerous third party titles to compensate for its weak first party offerings.

) is another typical Nintendo title: it’ll pique interest, generate column inches, but will do little to convince people to invest in a Wii U. It’s a game for those who already own the console — all ten million of them — but no one else. The only problem is that, even among those millions of gamers, I’m not entirely sure it amounts to more than further proof that Nintendo has a serious content problem on its hands.

That kind of pressure, however, is exactly why Woolly World can’t possibly live up to expectations. As a cheap downloadable title, it would probably be a near-perfect game. As a full price, first party release, Yoshi’s yarn starts to unravel.

That’s not the impression you’ll have when first playing it, however. To call Woolly World gorgeous feels like a cruel understatement. Much like LittleBigPlanet and Nintendo’s own Kirby’s Epic Yarn, developer Good-Feel has taken a fabric inspiration and wrapped, stitched and threaded it into every fiber of Woolly World‘s digital existence. The joy of seeing Yoshi knitted together, complete with fuzz and button eyes, traverse this handmade world never ceases to amaze.

Every facet of Woolly World has been thought out, designed and finished with delicate stitching to accurately convey its theme.

From cotton clouds to leather grounds, felt flowers to knitted enemies, Woolly World exploits its aesthetic to maximum effect — even foes carry the kind of weaponry that would genuinely terrify anyone formed from yarn, such as crochet hooks and pins. Mario‘s classic Piranha Plants are here — fire a ball of yarn at them and their deadly mouths will be wrapped tight before Yoshi dispatches them with a well placed leap. Shy Guys will unravel and waft away on the breeze. Yoshi will revert to a single strand and wrap himself around a spool to launch between islands. Every facet of Woolly World has been thought out, designed and finished with delicate stitching to accurately convey its theme. Even the overworld, which sits in a massive room filled with craft materials, provides the impression that the world has been lovingly put together, just for you.

Yoshi travels this world with all of the cutesy gusto he can muster. However, underneath its layers of carefully placed fabric, Woolly World is a rather generic 2D platformer. You have a relatively limited moveset: Yoshi can jump, hover for a limited amount of time, throw out his tongue to grab enemies and swallow them, before spitting them at others or digesting them and pooping out a color-coordinated ball of yarn — complete with an exclamation of “Bum!” (Yoshi may say something else, but after many hours with him I’m pretty convinced it’s bum.) That yarn — Yoshi can drag several behind him — can then be spat at enemies to wrap them up, dispatch them, form platforms, or reveal secrets and activate mystery boxes.

Yoshi’s main motivation falls into a long canon of pretty simplistic Nintendo plots. A bad guy (evil wizard Kamek) disrupts the Yarn Yoshis, deconstructing all but two (classic green and vibrant red Yoshi) into little clumps of yarn. Yoshi sets out to find his friends and stop Kamek and his evil wrongdoings. Oscar-worthy it isn’t, but it fuels the story about as much as is necessary. Really, the story is quite charming — told through speech bubbles between characters — but it’s utterly inconsequential as Woolly World‘s real aim is to make you collect things. Lots of them.

Each level — there are 55 in total, across six world — is crammed with flowers, yarn bundles, health pickups, stamps and rhinestones. Those yarn bundles (five per level) will form back into the various Yoshis at the end of levels, the flowers will unlock special levels in each world, while the stamps can be used to draw images that will randomly pop up in other gamers’ worlds. The rhinestones are used to augment the game: buy power-ups to reveal hidden secrets or to skip a level entirely, for instance. Speaking of hidden secrets, these are arguably Woolly World‘s biggest challenge. Some of the collectibles will require real thought and exploration to find — hidden walls, defeating specific enemies, beating timed sections, etc. It’s a welcome challenge, as the rest of the game is almost laughably easy.

There are flashes of Nintendo’s platforming excellence, but that’s all they are: flashes. Like a gaming Snapchat, you enjoy them briefly then they’re gone, never to return.

Woolly World offers two modes, an easier option for casual and younger gamers, and a classic mode for more experienced gamers. I opted for the latter, but not once did I feel genuinely threatened during my playthrough. Yes, there are varying enemy types and Yoshi can indeed “die” if he loses enough health, but not even boss levels posed a real threat. If I died, it was more often than not due to Yoshi’s oddly inconsistent controls — standard jumping and movement is impeccably smooth and balanced, but Yoshi’s hover mode was still irksomely awkward after several hours with it.

What’s more, apart from glimmering moments of brilliance, this a well trodden path that many gamers may quickly tire of. There are flashes of Nintendo’s platforming excellence, but that’s all they are: flashes. Like a gaming Snapchat, you enjoy them briefly then they’re gone, never to return. In certain levels, Yoshi transforms into certain objects or creatures: a plane, an umbrella, or a mermaid, for instance. These present their own unique challenges — as the umbrella, you’ll float on the breeze through levels, sailing past enemies, unable to attack them, collecting gems, and against the clock. Sometimes the levels themselves offer unique challenges, such as one set entirely on curtains — depicted in typically exquisite fashion — with Yoshi grabbing and sliding along them to the end of their rail, before leaping to the next. These levels are perhaps the most exciting and interesting part of Woolly World, but they’re also in the minority. If anything, they only highlight how generic the rest of Yoshi’s adventure is, which is a terrible shame.

Multiplayer is present, though it’s local only — a rarity in today’s constantly connected world. It works surprisingly well, and if your teammate is utterly hopeless you can swallow them and carry them through tougher sections. What’s less convincing is Nintendo’s amiibo integration. If you have amiibo from other games, such as Mario, touch them to the Gamepad and Yoshi will transform — I can’t intimate how wonderful it is seeing Yoshi dressed up as Mario, complete with knitted moustache. However, if you touch a standard Yoshi amiibo to your Gamepad, a second Yoshi will appear onscreen. You can’t control him — instead, he mimics your every movement and action. Thanks, but it’s more annoying than anything.

It’s an incredible testament to the efforts of developer Good-Feel that, a dozen or so hours later, as Woolly World concluded, I was still captivated by the fabric world Yoshi inhabited. However, by that point cute just wasn’t cutting it any more. I couldn’t play Woolly World for more than a few hours at a time before apathy set in and I sought out something more challenging, exciting, engaging? That’s not to say that Woolly World is a bad game, far from it. For younger gamers, or a relaxing couple of hours of stress-free gaming, it’s great — particularly for satisfying any collectibles addicts. Over the course of a full game, however, Woolly World is just too satisfied to rely on its looks to succeed. In a market where Wii U gamers are starved for content and Woolly World is unfairly being forced into the position of a flagship release, it just can’t justify itself at full price.

Yoshi’s Woolly World releases on Oct. 16 on Wii U. 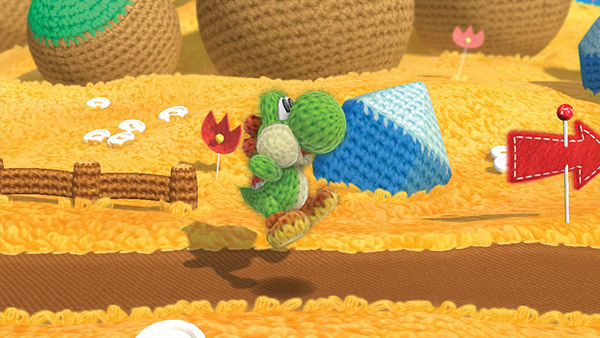