Home / Life + Leisure / Cars / US to Toyota: Why does ISIS have so many of your trucks?

US to Toyota: Why does ISIS have so many of your trucks? 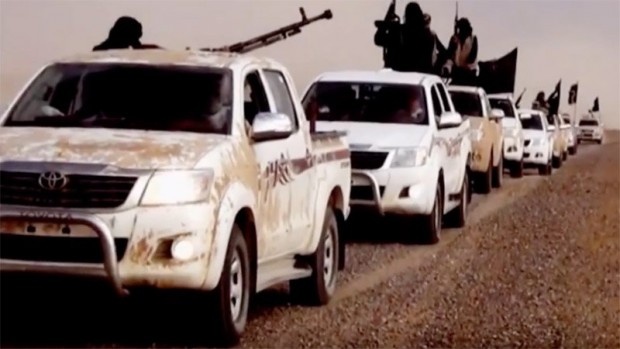 If you’ve been unfortunate enough to watch any of ISIS’s propaganda footage, there’s one thing auto fans will quickly spot: the terrorist group has an awful lot of new Toyota trucks in its ranks.

The Department of the Treasury has clearly taken notice, specifically its Terror Financing unit. ABC News reports that officials have asked Toyota to investigate how so many of their vehicles have ended up supporting ISIS soldiers. While it may seem a slightly unusual thing for the Treasury to investigate, it’s part of large-scale efforts to prevent Western goods from reaching the hands of ISIS soldiers.

“Regrettably, the Toyota Land Cruiser and Hilux have effectively become almost part of the ISIS brand. ISIS has used these vehicles in order to engage in military-type activities, terror activities, and the like,” Mark Wallace, former U.S. ambassadsor to the United Nations, told ABC News. “But in nearly every ISIS video, they show a fleet – a convoy of Toyota vehicles and that’s very concerning to us.”

Toyota was quick to refute any wrongdoing on their part for ISIS’s acquisitions.

“We briefed Treasury on Toyota’s supply chains in the Middle East and the procedures that Toyota has in place to protect supply chain integrity,” said Ed Lewis, Toyota’s director of public policy and communications.

In a statement issued to Autoblog, Toyota affirmed it “has a strict policy to not sell vehicles to potential purchasers who may use or modify them for paramilitary or terrorist activities,” and that they “have procedures and contractual commitments in place to help prevent our products from being diverted for unauthorized military use.”

Toyota points out that it’s impossible for them to monitor every third-party dealer or reseller — or to prevent ISIS from simply taking over a Toyota dealership in the region and stealing the vehicles.

However, Toyota stopped short of pointing out that its vehicles aren’t the only ones shown in ISIS propaganda videos. Indeed, the U.S. government has indirectly supplied ISIS with hundreds of vehicles, including the military’s iconic Humvee. Just this year, ISIS captured over 100 new vehicles which were abandoned by U.S.-trained and supplied Iraqi forces, while social media posts by ISIS showed 10 M1A1 Abrams tanks in their possession. Army Col. Steve Warren, a Pentagon spokesman, confirmed at least “half a dozen” tanks were taken at the time.

A few Toyota trucks suddenly doesn’t seem quite so menacing — though videos like this certainly don’t help: