By John Riley on October 15, 2015 @JohnAndresRiley 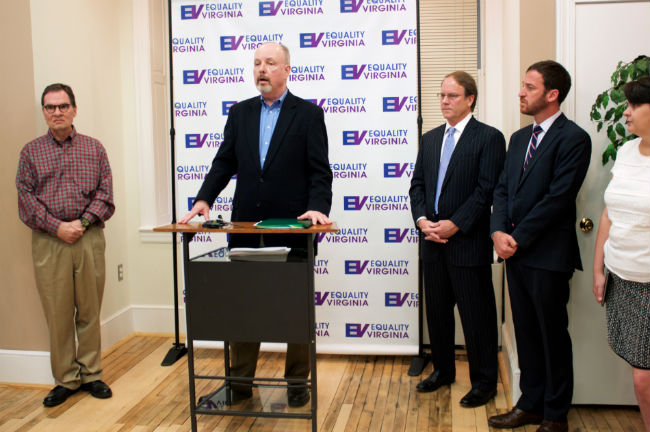 A Virginia man has filed an employment discrimination claim after being dismissed from his job at a Catholic nonprofit agency. He argues that he is a victim of sex discrimination under Title VII due to his sexual orientation.

John M. Murphy, of Richmond, first filed the claim with the Equal Employment Opportunity Commission (EEOC) on Sept. 24. His dismissal in April as the executive director of St. Francis Home — an assisted living facility for low-income people operated by the Richmond Catholic Diocese but managed and operated by lay people — was based solely on the grounds that he is gay and legally married to his partner of 30 years, he alleges.

In his filing, Murphy, a lifelong Catholic, claims that he was interviewed by an executive recruiter hired by St. Francis’ executive board before being interviewed. Murphy claims that the board told him that they operated semi-autonomously from the Bishop of the Richmond Diocese and did not seek nor need the bishop’s approval in making hiring decisions.

Murphy also claims he was told he would report directly to the board chair and would have little or no contact with the bishop. Before starting work, Murphy raised his sexual orientation and marriage with Board President Tina Neal, who told him it was not a problem. He was hired and began work on March 23.

According to comments made by board members, Murphy’s performance on the job was described as “awesome” by a supervisor. But when Murphy completed new employee benefits paperwork that identified his same-sex spouse, he ran into trouble. When the paperwork was forwarded to Diocesan headquarters for processing, Bishop Francis Di Lorenzo learned that Murphy was gay and married and ordered the board to fire him. The board unanimously refused to do so. In response, Di Lorenzo deputized lay representatives to go to the home and fire Murphy on April 1 without severence pay, health care coverage, or other termination benefits. Several board members later resigned in protest.

On Wednesday, Murphy held a press conference with his lawyer and representatives from various LGBT rights organizations or LGBT-related Catholic ministries, such as DignityUSA and New Ways Ministry, to highlight the situation surrounding his termination.

“This country has a long and important history of upholding religious freedom,” James Parrish, the executive director of Equality Virginia, said in a statement. “That right, which has preserved everyone’s ability to worship and believe as they choose, should not be repurposed to allow individuals or institutions to impose harm on others. Most Americans and Catholics will find it shocking that Mr. Murphy was fired by the Catholic Diocese of Richmond solely because he is gay.

“How can Bishop Di Lorenzo justify on legal or moral grounds firing John [Murphy] as Executive Director of an assisted-living facility for being in a same-sex marriage,” he continued, “which the U.S. Supreme Court ruled in the Obergefell case is a fundamental right under the U.S. Constitution? John’s case is even more shocking considering the July decision by the Equal Employment Opportunity Commission that sexual orientation discrimination is unlawful under federal Title VII.”

According to Richmond affiliate WTVR CBS 6, Murphy insists that Neal “shrugged and said [my same-sex marriage] was not a problem and, ‘This is 2015.'” Murphy and his husband, a retired clinical social worker, are currently relying on Social Security to survive.

The Diocese of Richmond issued a statement to WTVR saying that it does not discuss specific information regarding personnel matters out of respect for its former and present employees, but also added: “The Saint Francis Home, a religious-based independent nonprofit care facility located in Richmond, Va., was founded by the Catholic Diocese of Richmond to serve the low-income elderly. As a Catholic organization, we expect the employees of the Diocese and its ministries to uphold and embody the consistent values and truths of the Catholic faith, including those preserving the sanctity of marriage.”

But Murphy insists that he only wants to be judged by his job performance.

“I am appalled and deeply hurt that the Bishop of the church I grew up in would suddenly fire me solely because of the gender of the person I share my life with — a person to whom I am lawfully married according to the U.S. Supreme Court,” he said. “It is shocking to me that this can happen in 2015 in America, and I fear for my financial survival if any employer can do this to me at any time.”

John Riley is the local news reporter for Metro Weekly. He can be reached at jriley@metroweekly.com
← Previous Story HIV Heroes Walk to Better Health
Next Story → Transgender woman shot in head in Gaithersburg