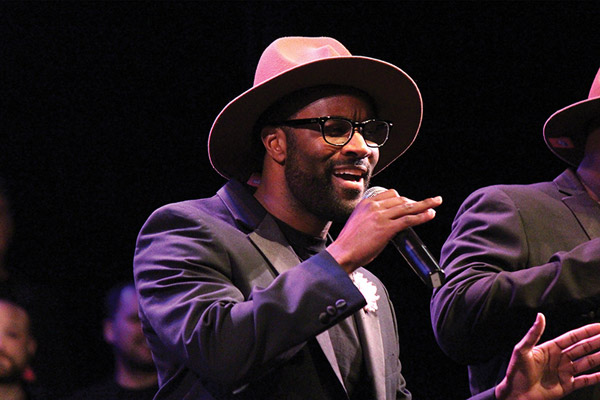 “It’s like our little GSA,” Thea Kano says in describing the Gay Men’s Chorus of Washington DC’s GenOUT chorus. The group, which brings together 30 openly LGBT students from more than 15 area high schools, is one of several initiatives for which the Chorus is raising funds as they host a second week of performances of The S* Show.

Featuring the music of Sondheim, Sinatra, and Streisand, the cabaret-style show tries to help audiences connect with performers beyond seeing them simply as characters. An intimate affair, the cast includes 11 vocalists and 1 pianist. Every performer is featured at least twice and, in addition to a song, each performer shares a personal story with the audience.

“I said come to the audition with a song in mind and its story in mind,” Kano continues. “That is my favorite part of this show — the natural progression of story to song.” Karo was interested in helping audience members better connect with the individuals who constitute the chorus. “We want the audience to know the performers better.” In this show “they aren’t just performing an act.”

To that end, last weekend’s performance ended with concert goers grabbing dinner with cast members at homes around D.C. According to Kano, menus and ambiances ran the gambit from steak and potatoes to pizza and beer to one house that served heavy hors d’oeuvres and cocktails. Hosted by a dozen chefs and ranging in size from 8 to 20 attendees, the dinners each had at least one member of the chorus in attendance. After dinner, houses played games, joined in music, or mingled over drinks. Kano’s evening concluded with “a cast party standing around the piano singing Sondheim.”

Sondheim, long a staple of the gay musical canon, received special prominence in this year’s show as it is his 85th birthday. “This year is Sinatra’s 100th birthday” noted Kano, so “he is on people’s radar.” Like Sinatra, Streisand performed Sondheim, so Kano decided “might as well do her, too.” The song selection process was very methodical. Two-thirds of the songs were brought in by performers to accompany their stories — Kano selected the final third to balance the ratio within the concert. She finished with a list that includes one more Sondheim than Sinatra or Streisand, but says that the show is incredibly balanced.

“The show is really fun and has lots of songs you know, but not necessarily the obvious ones,” says Kano. Mixing eclectic pieces and neat arrangements, gives the audience a “chance to get to know our featured soloists.”