Fallout 4 takes the innards of its predecessor and wraps them in a tough, beautiful suit of armor 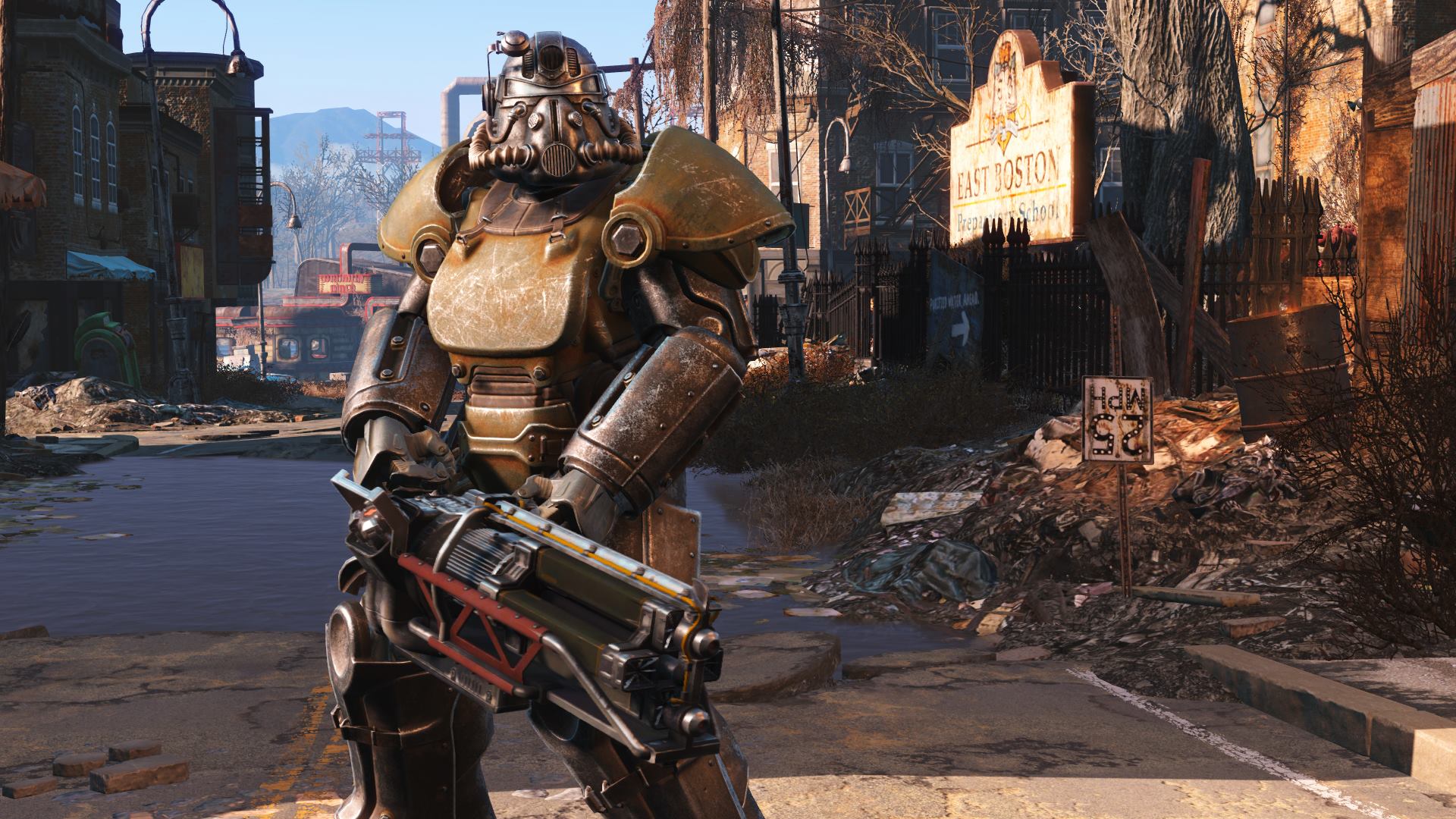 “War. War never changes.” So opens Fallout 4, as did its predecessors, with a stirring speech on mankind’s inability to go any length of time without murdering one another. It’s somewhat appropriate that the now iconic intro remains as it could easily be argued that Fallout never changes, at least since it relaunched with Fallout 3 as a first-person action RPG.

Fallout is still very much an open-world and action-oriented. You’ll still level up your character. You’ll still engage in combat through an odd mix of first person shooting and slow-motion aiming. You’ll still have multi-dimensional conversations with total strangers. You’ll still fill your pockets with an almost ludicrous amount of random junk and utter crap.

But what’s been added here ensures that Fallout 4 feels new, fresh, better than it has since that third entry. Bethesda has learned lessons from Fallout: New Vegas, even from Elder Scrolls: Skyrim, and turned out something that has more heart, more morality, more personality, more horror, and more adrenaline-pumping battles.

In its opening scenes, Fallout finally treats us to life before the rubble-strewn wastelands we’re so used to. This time around the action is set in Boston in 2077. You’ll join the game in front of the bathroom mirror, with a married couple waiting to have their various features tweaked and fiddled with. Once you’ve picked a gender and customized your character, it’s story time. Unlike Fallout 3, which cast you as a child and sent you out into the ruins of D.C. to find your father, here your role is much more structured. You’re married, you have a wife or husband, you have a son, and you live an idyllic suburban life. Then the bombs start falling. 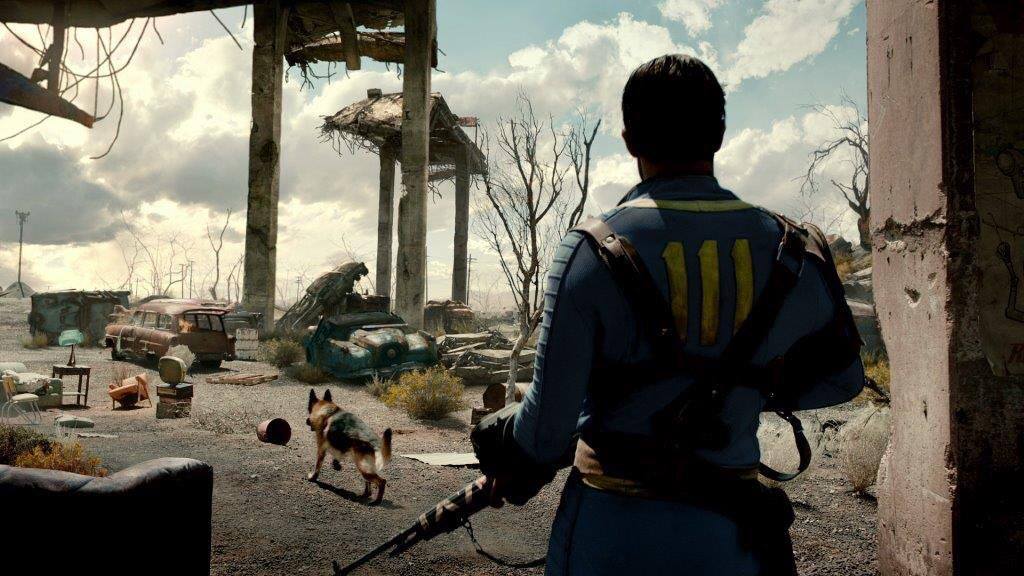 After rushing to Vault 111, you’ll emerge 210 years later to find your son has been taken. Now, you have to get him back. Of course, after the first few story missions, which slowly introduce you to Fallout 4‘s world, you’re entirely able to completely ignore that story. That’s the joy of Bethesda’s open world. You can adhere to the narrative and follow to its dramatic conclusion, or you can create your own story as you work through the ruins of post-apocalypse Boston.

That said, I’d strongly advise sticking with Fallout 4‘s story, because that more structured narrative focus means that Bethesda could play with numerous strands of morality-clawing plotlines. You’ll be asked to make incredibly tough decisions, such as whether sentient androids constitute “life,” and the resulting fallout (sorry) of those choices. Boston has been ripped apart not just by nuclear war, but by people who all want to better themselves without having to help one another. You’ll be forced to climb social strata, to engender trust, to work for the betterment of certain groups — often at the expense of others. Fallout 4 demands that you make hard choices, then changes its world to fit your decision. It’s a compelling system, one where I felt I was making a real impact in the world in a way my lost traveller didn’t in Fallout 3.

It’s compounded by the phenomenal world-building Bethesda is capable of. Boston and the surrounding area, with its retro-future aesthetic and post-nuclear insanity, feels as real as it can given the nature of its existence. The graphics are beautiful, helped by a color scheme that abandons the oppressive grey-greens of Fallout 3 for oranges, blues, reds, accented by bright sunlight and enveloping darkness. The decay is present in collapsed buildings, rusted cars, ruined highways and decimated vegetation, but it’s the small touches that really stand out: a hastily-packed suitcase in an abandoned house, a photo frame with the photo long since decayed, two corpses alone in a cave. What was life like in the aftermath of nuclear war? What led to their demise? Where is the person in that photo? Fallout 4 constantly presents nuggets of life, but leaves you to draw your own conclusions. Speaking to people, learning about their experiences, the tragedy they’ve witnessed, the hardships they face, it all adds to the emotion of the world, of the desire for life but the utter monstrosity of it all.

V.A.T.S adds a strategy element to firefights, even more so now that it doesn’t pause gameplay, instead merely slowing down time.

Monstrosity is a pretty accurate term for many of the foes you’ll meet in Fallout‘s world. From grossly disfigured supermutants, to horrifying deathclaws, to creepily human-like androids, to oversized rats and cockroaches, to the two-headed cows that dot the landscape. Thankfully, fighting them (not the cows, obviously) is one of Fallout‘s compelling strengths. V.A.T.S. returns, which is Fallout‘s RPG-style, zoomed-in shooting mode that lets players highlight specific body parts on enemies and suggests a percentage chance for hitting them. It adds a strategy element to firefights, even more so now that it doesn’t pause gameplay, instead merely slowing down time. Take too long to line up shots and you can easily be killed. Unfortunately, free aim shooting remains utterly average. You’re more likely to waste your scarce ammo supplies than anything, which makes using V.A.T.S. to your advantage ever more necessary.

The companion system sadly does little to help matters here. Your first friend will be an adorable German Shepherd, Dogmeat, who’ll wag his tail and bite things, but more often than not will get almost killed and require reviving. Humans are no better. They frequently get stuck behind objects or require constant micromanagement, and more than once I found myself shooting them accidentally as they blundered into view. 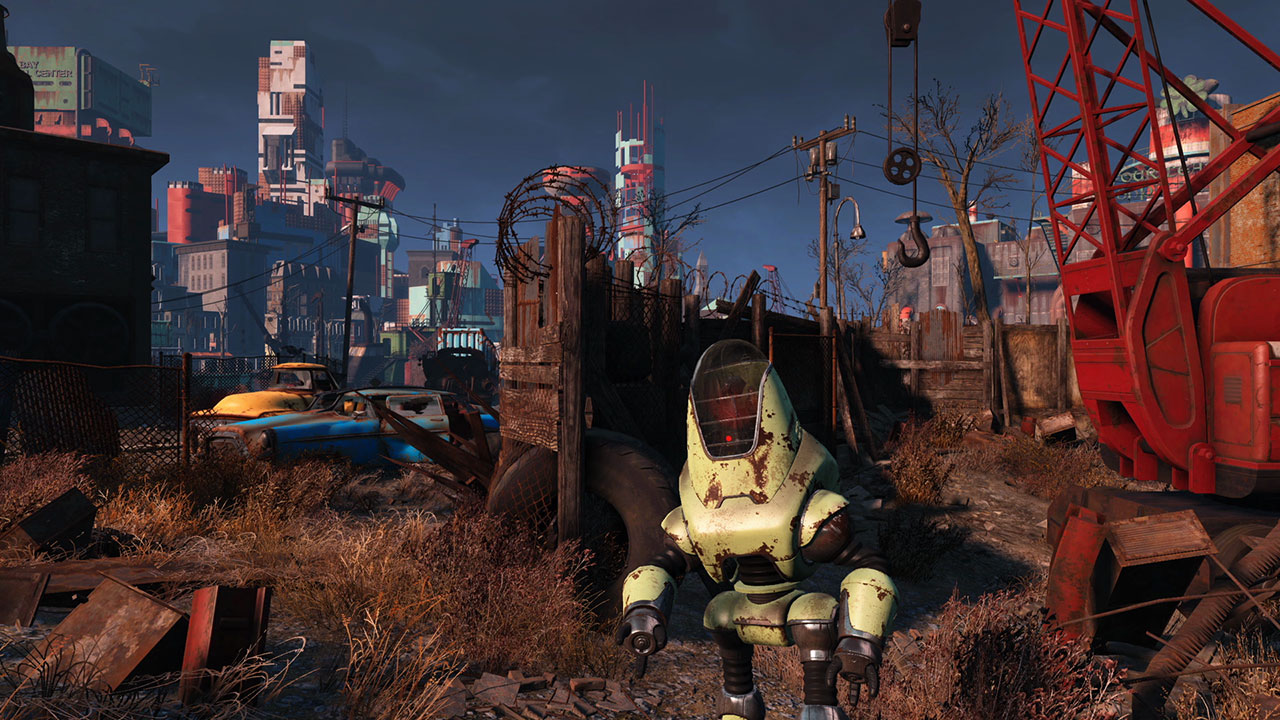 Thankfully, there are new and exciting ways to kill people and things (that aren’t your companions). Mods are present, and can be applied to weaponry and armor for boosts and upgrades. Said armor can also include a fusion-battery-draining set of Power Armor — essentially, a wearable tank that shields from most damage and lets the player wield big, powerful weaponry. You’ll need to upgrade and repair it, but stomping around the wasteland in a set of well-equipped armor is one of Fallout 4‘s biggest draws. And if stomping isn’t your thing, strap a jetpack on and fly.

Repairing is as simple as breaking down junk into its component parts and crafting it into supplies and modifications. Yes, finally, that crap that litters every corner of the map has a use. From coffee cups to sofas, steel beams to toasters, everything you can pick up can be stripped down and recycled. Kleptomaniacs beware, you can lose hours looting everything from a location.

That junk is also used to establish and maintain settlements, offering reprieve for wandering travellers. They’re homes built in specific areas that can produce food, repair items, generate resources and more, which you’ll build, repair and defend. Maintaining them and attending to the residents’ needs is its own minigame — I spent hours building houses, fashioning furniture, and making sure everyone had enough to eat and drink. Of course, the fear of Raiders wreaking havoc in your communities is real, but that only adds further gravitas to your decisions and resource management.

It’s the little details that make Fallout such a compelling series.

And then there’s all the little things that make Fallout such a compelling series. Getting lost in conversations with every resident of a town, trading through the in game economy, playing Fallout versions of classic games such as Donkey Kong on the Pip Boy, successfully looting an incredible new weapon from an overpowered enemy, walking from one end of the (massive) map to the other, witnessing a radiation storm, stumbling into other conflicts that you’ve played no part in, using the Fat Man mini atomic bomb launcher, listening to the wonderful radio stations, unlocking every perk in the new and very attractive SPECIAL upgrade system. What’s more, there’s no level cap, so you can unlock absolutely everything and revel in your god-like abilities. 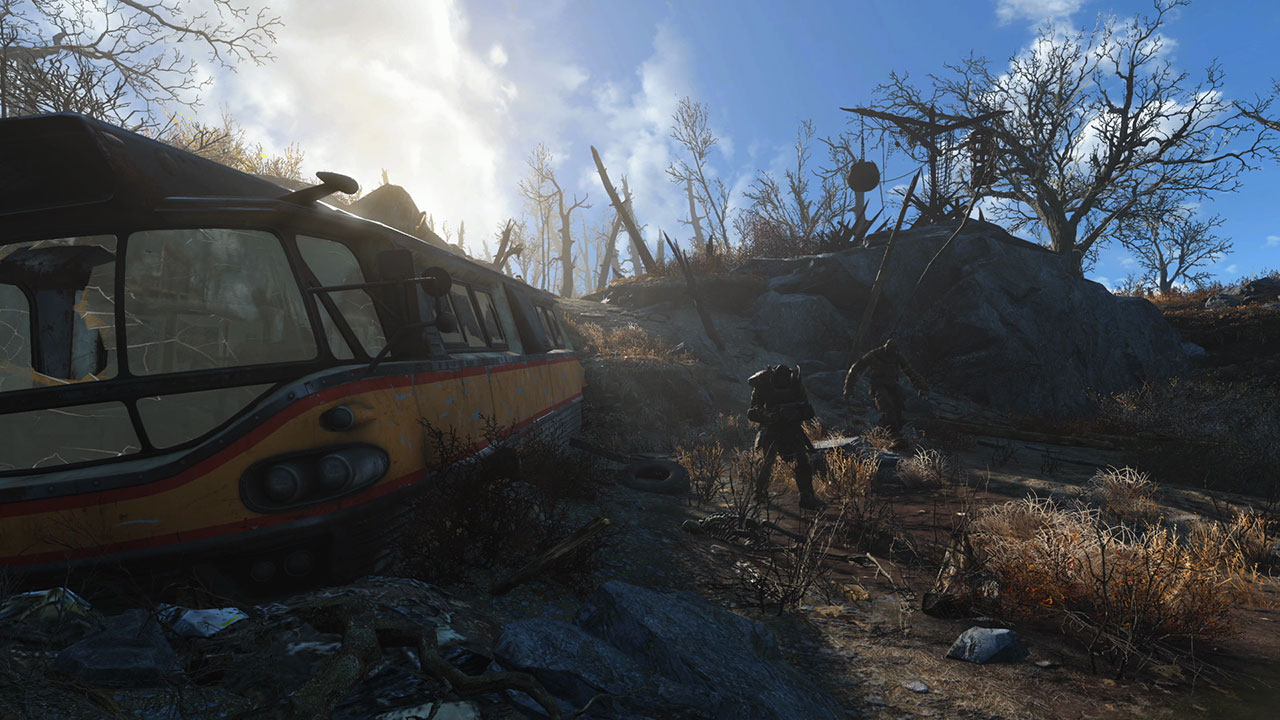 Of course, the usual Bethesda open-world bugs are here. You’ll get stuck on things, you’ll fall through the world, character models will vanish, enemies will glitch out of existence. Some things can’t be looted, certain textures will blend into one another. The game has been known to crash, while dialogue is hit or miss — sometimes characters will stop speaking, requiring subtitles to know what’s going on, but occasionally the subtitles will stop working as well. In my first hour with the game, I had to follow a group of settlers to a town. I watched as the leader trapped himself behind a car and every resident promptly followed. Sure, it was amusing, but after so many games where these bugs have been present, it’s surprising that Bethesda hasn’t ironed more of them out.

Minor niggles aside, Fallout 4 is another grandiose achievement. It slots well into the series, offering just enough new additions to prevent it from feeling like an elaborate rehash of Fallout 4. Power armor, settlements, a greater sense of morality and a deeper exploration of life in an apocalypse lend some gravitas to the game. As exciting as many of its fights are, I often looked forward to its moments of dialogue more. By the time I finally found my son, I wasn’t ready to give up my time in Fallout 4‘s world. And, thankfully, you don’t have to. The end is merely the beginning. The wasteland is yours to explore.

Fallout 4 is available now on PC, PS4 and Xbox One.