Home / News + Politics / Local / Fighting in Fairfax: A rundown of school board races

Fighting in Fairfax: A rundown of school board races

By John Riley on November 3, 2015 @JohnAndresRiley 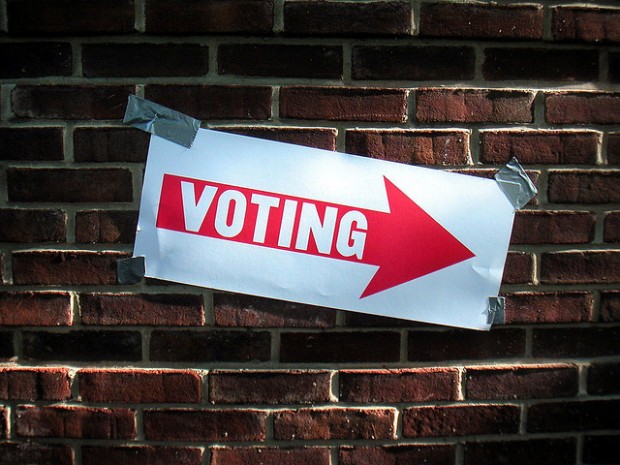 Tuesday is Election Day in Virginia, with political pundits eagerly looking to see which of the major two political parties will take control of the state Senate. But a number of races that have been overlooked are those for local office, specifically for the Fairfax County School Board.

While control of government bodies in Democratic-leaning Fairfax is usually never in question, the incumbents seeking re-election to the school board are under heavy fire for approving pro-LGBT nondiscrimination policies for Fairfax County Public Schools, and for attempting to incorporate some basic LGBT-related material — such as defining the terms “sexual orientation” or “gender identity” — into lessons for the Family Life Curriculum. The school board later voted to move all the objectionable material out of Family Life and into the health curriculum, where parents are able to choose to “opt out” their children.

Since voting twice — first, in November of last year, to include sexual orientation, and second, in April, to include gender identity — to amend its nondiscrimination policy, the school board has been beset by complaints and threats from angry parents, community members and conservative interest groups angry at the inclusion of gender identity. Some have even invoked the frequently debunked argument of so-called “bathroom panic,” alleging that women and girls in particular will be unsafe if transgender females are allowed to enter female restrooms. Still others complain that the board has been secretive in its dealings, jamming through the policy without significant community input, based on what opponents say is flawed legal advice from Attorney General Mark Herring (D).

While all races for school board are technically non-partisan, the GOP and Democratic county committees can choose to endorse school board candidates. Notably, all of the candidates endorsed by the county GOP are either incumbent members who voted against the gender identity policy, or have campaigned against the school board’s decision to amend the nondiscrimination policy. Given the passions that the debate over LGBT inclusion has inflamed, it would not be surprising — should non-incumbents oust many of the current school board members — to see protections for LGBT teachers, staff and students repealed.

Equality Virginia has endorsed the eight incumbents who voted for the LGBT policies in their re-election bid. The organization is also backing challenger Dalia Palchik in the Providence District against incumbent Patty Reed. On the other side of the issue, the Traditional Values Coalition (TVC) has recommended that voters select all GOP-backed incumbents and challengers. All challengers and incumbents, as well as leaders of TVC, have argued that the recommendations were not sought by the candidates or approved by their campaigns.

In recent weeks, conservatives have been flooding online message boards dedicated to Northern Virginia warning that Fairfax will adopt an “any gender, any bathroom” policy and accusing the board members of attempting to normalize “abnormal” and “immoral” sexual behavior. Those online posters have also claimed that transgender people are mentally disturbed.

Below are a list of the candidates in Tuesday’s elections for Fairfax County School Board: 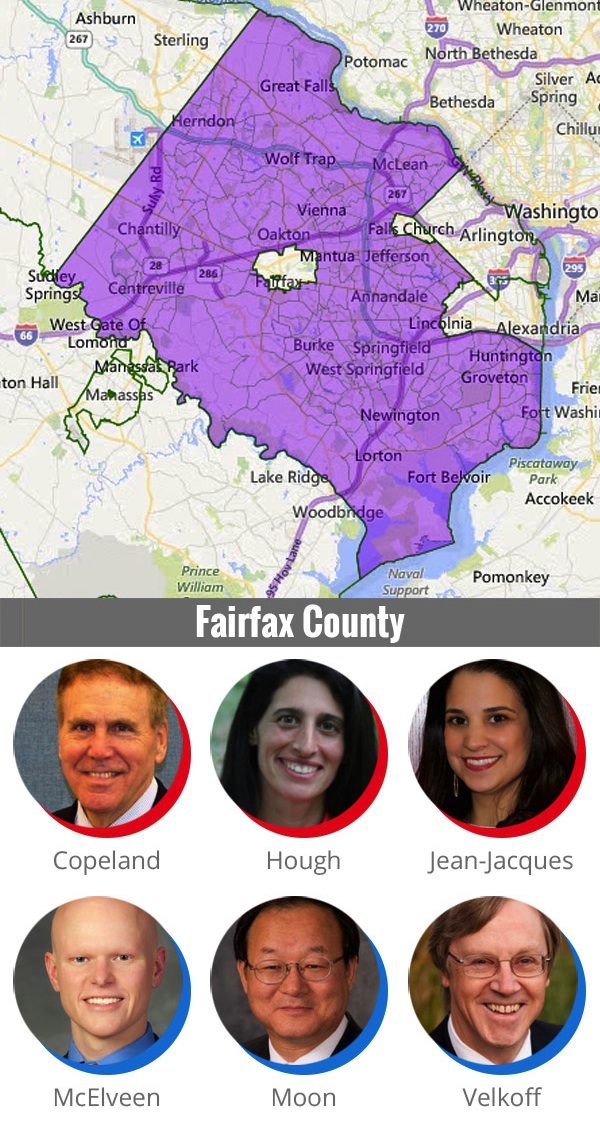 The three At-Large seats on the School Board are currently held by incumbents Ryan McElveen, Ilryong Moon and Ted Velkoff. They are being challenged by Bob Copeland, Jeanette Hough, and Manar Jean-Jacques, who are running as an anti-incumbent slate. All three challengers have emphasized “being responsive” to and “respectful” of parents as part of their platform, which some LGBT supporters view as an indirect reference to the conservative parents who mobbed school board meetings earlier this year and have claimed the school board went against the wishes of the “majority.” Also appearing on the ballot are independents Peter Marchetti, Omar Fateh, and Burnette Scarboro. 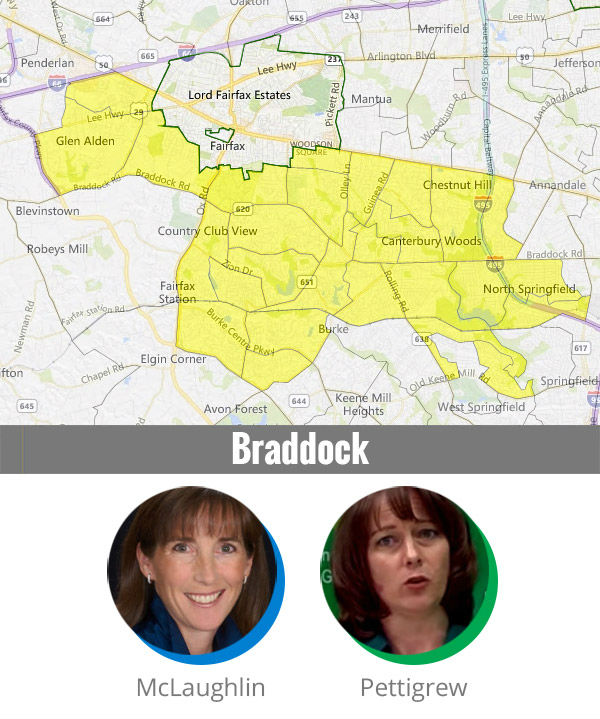 Incumbent Megan McLaughlin, who voted for the pro-LGBT policies, was one of the board members who took the most verbal abuse from boisterous audience members at the board’s April and June meetings, when the transgender protections and the Family Life Curriculum were voted upon. She is being challenged by Katherine Pettigrew, a chemistry professor at George Mason University. Pettigrew has been endorsed by the Independent Green Party of Virginia. Neither candidate has been endorsed by the Traditional Values Coalition. 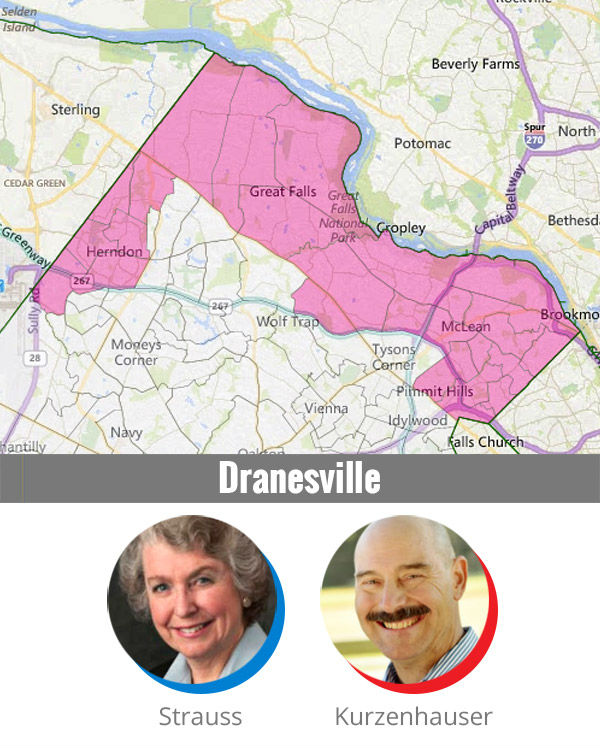 Incumbent Jane Strauss had one of the closest election victories of all school board members during the 2011 cycle, winning by only 4 percentage points. She voted for the pro-LGBT policies that came before the board. She is being challenged by Peter Kurzenhauser, who is being recommended by the Traditional Values Coalition. Much of the Dranesville District overlaps Virginia House of Delegates District 34, which features a tight race between incumbent Kathleen Murphy (D) against challenger Craig Parisot. Several precincts up in the McLean area have historically given Republican-backed candidates large margins of victory, which might make this race closer than the average school board race. 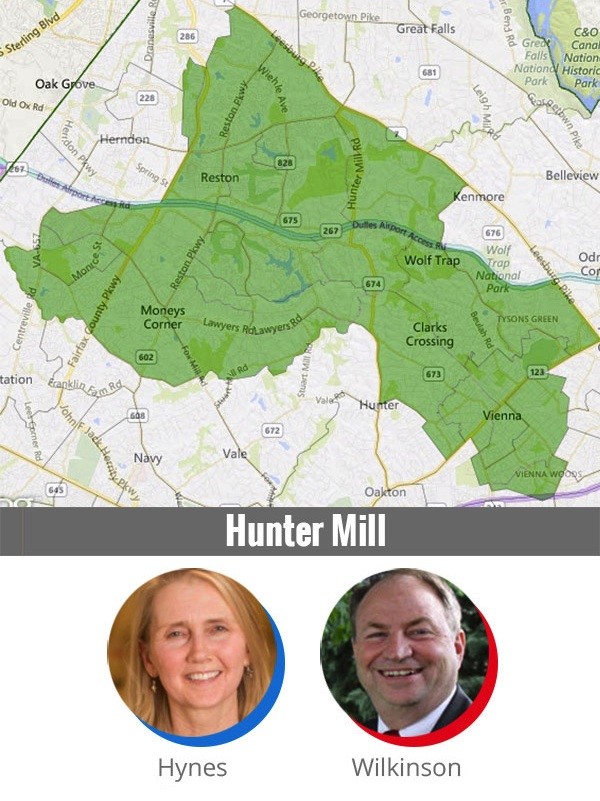 Incumbent board member Pat Hynes is running for re-election in this Reston-based seat. She has voted for all of the pro-LGBT policies that have come before the school board, and has been endorsed by Equality Virginia. Her challenger is Mark Wilkinson. 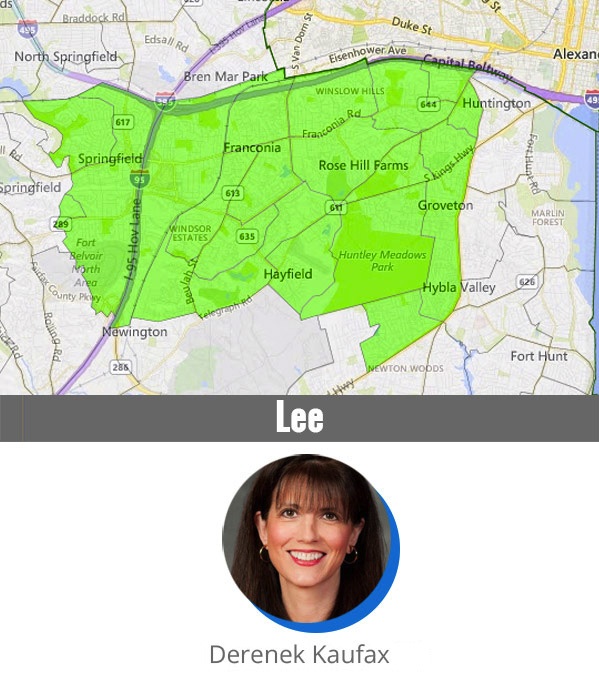 Incumbent Tamra Derenak Kaufax, the current chairwoman of the school board, is unopposed in this southeastern Fairfax district. She has a pro-LGBT voting record. 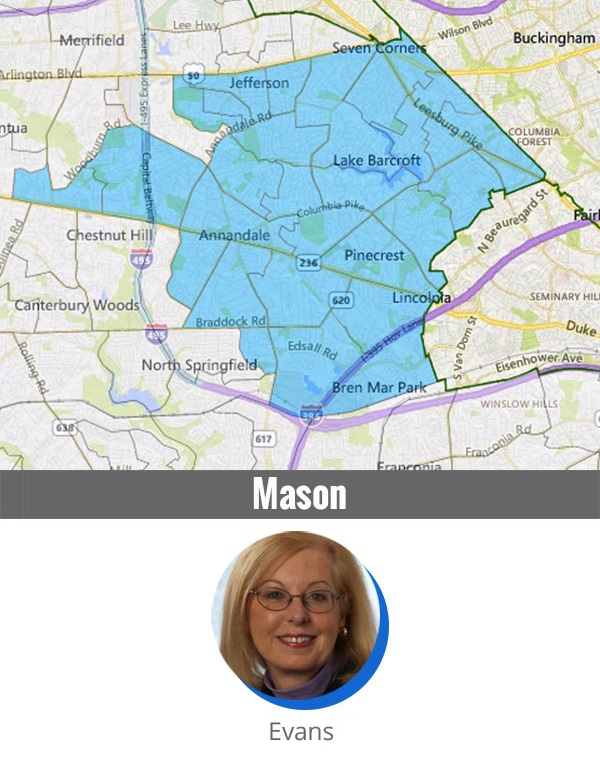 Incumbent Sandy Evans is unopposed in this district stretching from Seven Corners to Annandale. She has a pro-LGBT voting record. 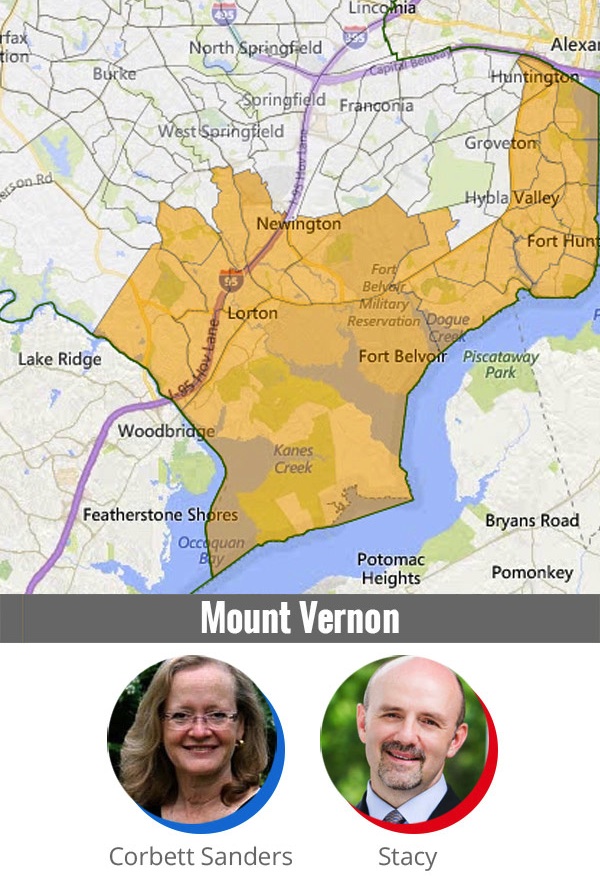 Incumbent Daniel Storck, who voted for the pro-LGBT policies on the school board, is running for the Fairfax County Board of Supervisors for the Mount Vernon District. Running for this open seat are Karen Corbett Sanders and Anthony Stacy. 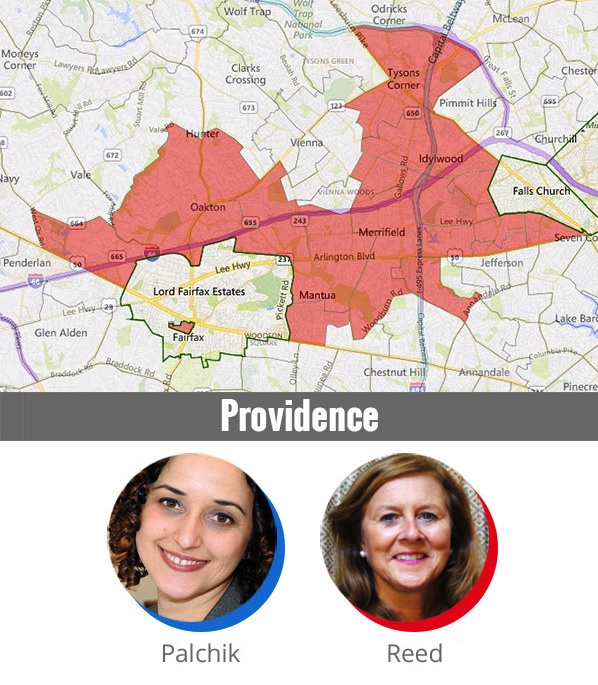 Incumbent Patty Reed is up for re-election, and has a mixed record on the LGBT-related issues that came before the board. She voted in favor of adding sexual orientation to the FCPS nondiscrimination policy, but against adding protections for gender identity, arguing that community members and board members did not have enough time to weigh the potential consequences of passing gender identity protections. She opposed the inclusion of LGBT-related material into the Family Life Curriculum, but also voted with the rest of the board, minus Elizabeth Schultz, to strengthen and make more accessible the “opt-out” forms for parents who wish to exempt their children from Fairfax’s health curriculum because it addresses LGBT-related issues. She is being challenged by Dalia Palchik, who is being unofficially supported by Equality Virginia and is in favor of the pro-LGBT policies adopted by the board. 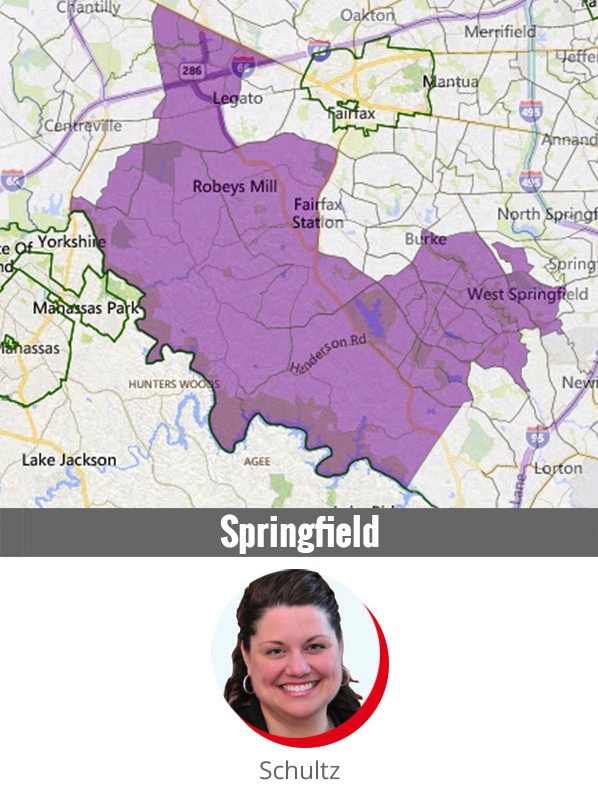 Incumbent Elizabeth Schultz, the most vocal member of the board opposed to the pro-LGBT policies and a ringleader of the many conservative parents and community members who showed up in force to oppose the school board’s changes, is the only candidate running in this southern Fairfax district. 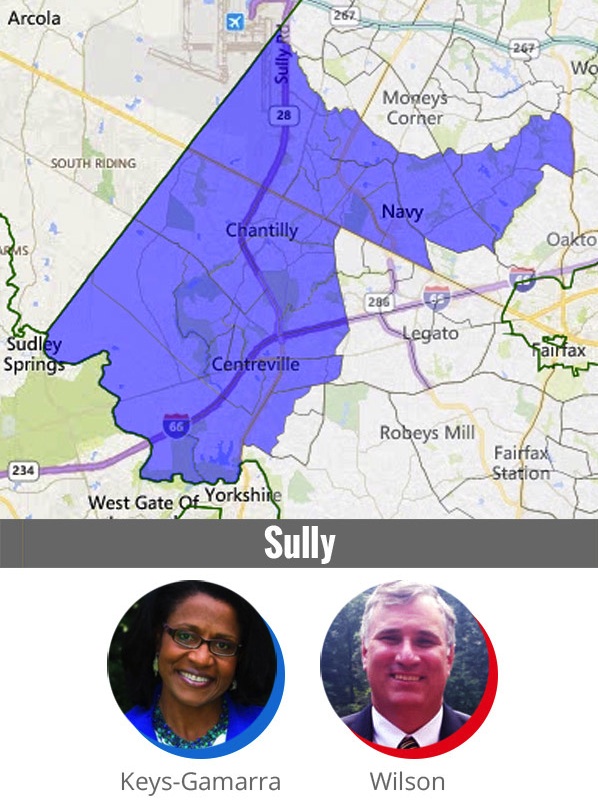 Incumbent Kathy Smith, who voted for pro-LGBT policies while on the board, is running for the Fairfax County Board of Supervisors for the Sully District. Running to replace her in this conservative-leaning district are Karen Keys-Gamarra and Tom Wilson.

John Riley is the local news reporter for Metro Weekly. He can be reached at jriley@metroweekly.com
← Previous Story Equality Virginia PAC rounds out endorsements
Next Story → Election 2015: Democrats gain seat in Virginia House of Delegates