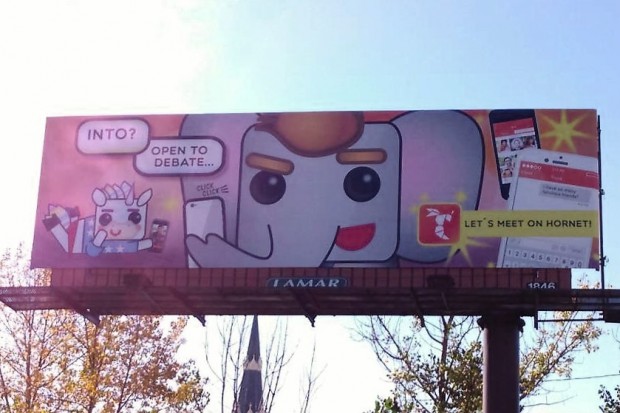 While the Republican presidential debate was (perhaps thankfully) devoid of any LGBT issues, outside the Milwaukee Theatre it was a different story. That’s in part thanks to gay dating app Hornet, who erected a giant billboard playfully referencing the debate.

It features a unicorn messaging an elephant with suspiciously Trump-like hair, asking “Into?” with the elephant responding “Open to debate…” A text message at the edge of the image states: “I have so many fabulous friends.”

With all the elephants in town that’s one busy unicorn #GOPDebate #Milwaukee #gay #LoveWins pic.twitter.com/FhSMLWsZyC

Hornet’s creators devised the billboard as a tongue-in-cheek way to keep LGBT issues at the forefront of the GOP debates — they’ve previously been mentioned only when candidates disparaged marriage equality or transgender issues.

“We wanted to inject some humor and poke fun at the race,” a Hornet spokesman told Newsweek. “For most gay men around the world, they don’t enjoy full equality, so it is important that at a debate like this we interject ourselves into politics even if the candidates aren’t talking about our issues.”