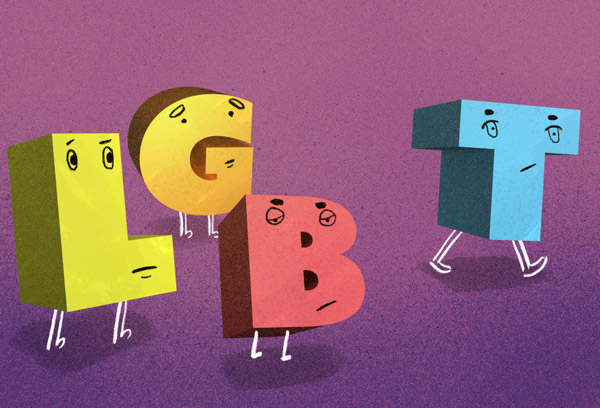 “We feel that the transgender ideology is not compatible with the rights of women, gay men and children,” reads a controversial petition posted on change.org. “In essence, we ask that organizations…stop representing the transgender community as we feel their ideology is not only completely different from that promoted by the LGB community, but is ultimately regressive and actually hostile to the goals of gay women and men.”

As of noon on Tuesday, the petition had gathered 1,674 signatures from purportedly gay, lesbian and bisexual individuals who wish to separate themselves from transgender, non-binary, and gender nonconforming individuals, all of whom are currently covered by the umbrella term LGBT. The petition suggests that the LGB community and the transgender community, allies in various fights ranging from marriage equality to workplace nondiscrimination legislation, go their separate ways to promote their own agendas.

The “Drop the T” petition is a laundry list of grievances against the transgender community, including allegations of harassment and verbal or physical intimidation of LGB people at the hands of transgender activists, the usurpation and appropriation of the history of the gay rights movement, and infringement upon private spaces, restrooms or other changing facilities, particularly those reserved for biological women, by transgender women. It also claims that the transgender community has asserted undue influence over parents and health professionals in order to diagnose children as transgender at an early age.

The major LGBT organizations named in the petition — Lambda Legal, the Human Rights Campaign, and GLAAD — quickly responded by denouncing the petition’s intent, arguing that it does not behoove the movement to drive a wedge among the various groups that comprise the community. And an even larger number of people — 3,674 as of noon on Tuesday — have signed a counter-petition affirming the importance of keeping the LGBT community intact.

The author of the petition, using the pseudonym “Clayton,” gave an interview to the right-wing website The Federalist in which he asserts that many LGB people feel similarly about being grouped together with transgender activists, but are afraid to speak out.

“I think this is an absolutely important distinction that has not been discussed at all,” Clayton said. “Gay/bisexual men and women just ARE — we don’t need medicine or surgery to help us become who we believe we are, which is the case with the trans community.

“There’s a bigger story here, about what happens when small groups of activists, amplified by social media, do things that are really outrageous, that then get picked up.”

“To take it further, the first is about sexual and affectional orientation, who we are sexually attracted to and who we choose to share our love with. The latter is about gender identity, and altering one’s body to fit what one’s mind believes it should resemble. They are two very, very different ideas, and the problem that develops when we are all under the same umbrella is that so many of our enemies see us as one and the same.” 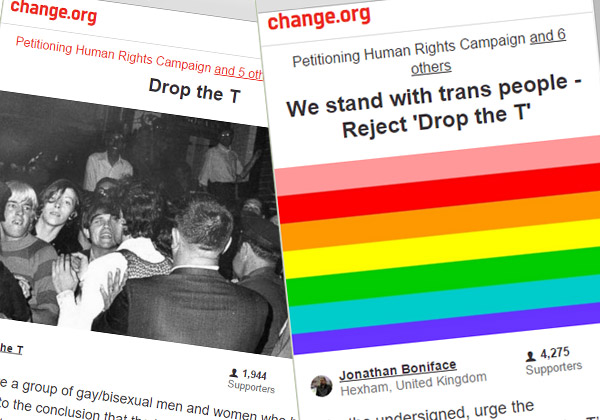 Transgender activist Dana Beyer says Clayton’s assertions are “misinformed,” adding “I have not read crap like that in a long time, all in one place.”

Says Beyer, “There’s a bigger story here, about what happens when small groups of activists, amplified by social media, do things that are really outrageous, that then get picked up — and others, who are looking to stir up fights, use that to represent the community at large. And that’s what the case with this is.”

Beyer said that there are some in the LGB community who mistakenly believe the transgender community is somehow “ruining” the progress that could be made on the equality front.

“I almost felt like it was 2007 and ENDA all over again, with some of the nonsense,” she adds. “We’re not going back there. This is so absurd because it’s such a throwback to those days. And then the TERFs [trans-exclusionary radical feminists] jump on board, and now we’re back at our arguments with NCLR and the Task Force and the rest about the Michigan Womyn’s Music Festival from last year. It’s so petty and childish.

“What this story has done has simply torn the bandage off a long-separating abscess in the community,” says Beyer. “Not a life-threatening abscess, this isn’t something that’s going to cause sepsis and kill the patient. But it’s something that’s been there that we’ve bandaged over, we’ve never really cleansed it out completely, we probably never can cleanse it out completely, because we are fundamentally two different communities that are also the same community. This has always been the problem. But you read [Clayton’s] interview, and he acts as if the gay community is this one unified, homogenous group of people. And that couldn’t be further from the truth.”

Beyer says many of those differences among members of the LGBT community are often papered over in some instances, as when passing nondiscrimination legislation.

“The genius of the American system as it’s developed, when you use terms like ‘gender expression’ and ‘sex stereotypes,’ as the Supreme Court has used, you don’t have to deal with different groups,” says Beyer. “You don’t have to ask, ‘Are genderqueer dudes covered by this?’ Everybody’s covered by it. It doesn’t matter what the variation is today, or will be 50 years from now. It’s the concept. It’s the classification that matters. So we don’t have to have all the infighting.

“I think for most people in the movement, the key factor has been that, at the end of the day, we are all hated because we are all different,” she adds. “We’re not the mainstream, cisgender, heteronormative culture. We were all originally hated, or now are just making people uncomfortable, the ick factor, and all that. We are all at risk because of that dichotomy…. That’s why we fought to become part of the overarching gay community to make it LGBT and why we are where we are and have made the progress we’ve made today.”

Richard J. Rosendall, the president of the Gay and Lesbian Activists Alliance (GLAA) of Washington, says that the quick response from the organizations who rejected the petition’s premise made it clear that the request to sever ties between the LGB and transgender communities was “dead on arrival.”

“Our community is diverse. It always has been,” says Rosendall. “In recent years, many of us have been trying to do better to reflect and embrace and respect the diversity of the community. And recognizing the importance of coalition work that goes beyond our own community in order to advance a common interest of various at-risk groups.”

Rosendall says the author’s unwillingness to share his identity seems to suggest cowardice, adding that those who have signed the petition are speaking only for themselves, and not for the larger equality movement. But beyond its offensive assertions, he says, the LGB community really doesn’t have the ability to “drop the T,” as their fates are closely linked.

“For gay folks to support dropping the T would be like the turkey inviting the cook to lunch,” Rosendall says. “It would be suicidal. Our opponents are not going to be fooled. They will continue to lump us all together because they consider all of us a threat to what they believe are proper gender norms.

“That reality of diversity needs to be asserted and defended because our opponents want to pretend that everybody in the country looks like them, loves like them, believes like them and thinks like them. And they want to make the rest of us effectively disappear or disenfranchise us. It would be the politics of subtraction for us to consider dropping any of us, and that simply is not going to happen.”

John Riley is the local news reporter for Metro Weekly. He can be reached at jriley@metroweekly.com
← Previous Story Iowa hotel accused of profiling black transgender woman
Next Story → Bimonthly injections as effective as pills at treating HIV