Reacting to Ryan: LGBT groups react to the new Speaker

By John Riley on November 5, 2015 @JohnAndresRiley 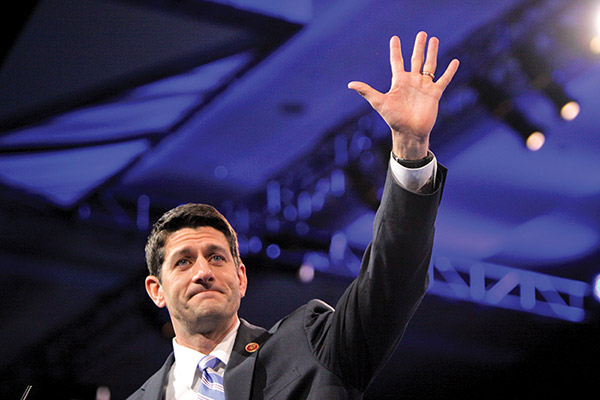 For weeks prior to accepting the position, Ryan had been touted by some as the only Republican in the House who could unite the fractious Republican caucus. The previous GOP speaker, John Boehner, had encountered problems trying to keep his party members in line for major pieces of legislation, and was frequently criticized by hardline conservatives for being too accommodating to Democrats. But Ryan received similar criticism in the run-up to his election, particularly from conservative media outlets who criticized past legislative deals he had struck with Democrats.

To win over members of the 40-member Freedom Caucus, the most conservative branch of House Republicans, Ryan had to make several concessions. Among them, rules changes that will allow more input from more conservative elements within the caucus and a pledge not to pass immigration reform while President Obama is in office.

A similar deal has not yet been cut with socially conservative members on the issue of LGBT rights and Gregory T. Angelo, president of the Log Cabin Republicans, says this is an “encouraging” sign, noting that it may be an indication that Republicans are “realizing that they’re not going to win if they make a point of using LGBT issues to divide.” Moreover, Angelo notes, Ryan has shown a willingness to listen to concerns voiced by LGBT groups like Log Cabin.

“Log Cabin has had a good working relationship with Speaker Ryan’s office,” says Angelo. “The door has always been open to the Log Cabin Republicans. We are looking forward to continuing that relationship.”

But other LGBT groups are less positive about a Ryan Speakership, instead choosing to adopt a “wait-and-see” stance.

“The American people are ready to turn away from the politics of discrimination, and we certainly hope that Speaker Ryan will lead the caucus in a new direction,” said David Stacy, government affairs director for the Human Rights Campaign, in a statement. “With a majority of Republican voters in support of federal nondiscrimination protections for LGBT citizens, it’s past time that Congress advanced the Equality Act, which would finally protect LGBT Americans from discrimination no matter which state they call home.”

“My friends at Log Cabin must surely understand that their party is under siege by the conservative House Freedom Caucus, who will never allow the GOP House leadership to support any type of LGBT rights legislation.”

According to the Human Rights Campaign’s Congressional Scorecard, Ryan received a zero for the last congressional session from 2013-2015. However, Ryan did vote for a sexual orientation-only version of the Employment Non-Discrimination Act in 2007. This year, Ryan voted for an amendment to an appropriations bill for the Housing and Urban Development (HUD) that no funds can be used in contravention of an executive order, signed by President Obama, that prohibits federal contractors from discriminating on the basis of sexual orientation or gender identity. But Ryan has largely been opposed to other LGBT issues, such as relationship recognition for same-sex couples, throughout his career.

Aaron Tax, the director of federal government relations for Services & Advocacy for GLBT Elders (SAGE), expressed a similar hope that Ryan would not block pieces of legislation that could help LGBT elders.

“We’re hopeful that Speaker Ryan will lead Congress in catching up to the American people in their support for LGBT equality and their support for critical programs like Social Security, Medicare, and the Older Americans Act, which take care of older adults, including our LGBT elders,” Tax said in a statement to Metro Weekly.

Matt McTighe, campaign director for Freedom for All Americans, which advocates for pro-LGBT measures throughout the country, gave Ryan mixed reviews based on his previous votes in Congress.

“It’s pretty early to say what kind of Speaker he’ll be,” McTighe says. “In the past, he’s shown at least a willingness to listen, to be more moderate, to at least try to not just reflexively go to appeasing the far right wing corner of his caucus. Obviously, we know that he’s not the biggest backer of dealing with the LGBT community either, so we’re not expecting him to be a champion.”

McTighe hopes Ryan will be more amenable to allowing a piece of legislation like the Equality Act — which would prohibit anti-LGBT discrimination in a number of areas — to receive a vote in Congress. McTighe says his organization is trying to create a “tipping point effect” and maintain a “constant drumbeat” of support for protections, with the eventual aim of passing a federal bill.

“The only way to get explicit, statutorily-guaranteed protections for all LGBT Americans is through an Act of Congress,” he says.

The National LGBTQ Task Force blasted Ryan’s pledge not to bring up an immigration bill.

“We are extremely disappointed with Speaker Ryan’s closed-door negotiations on immigration legislation, which reportedly secured him the votes to be Speaker but will have devastating results and life-threatening consequences for millions of immigrants in the U.S., including LGBT immigrants,” Stacey Long Simmons, director of public policy and government affairs for the Task Force Action Fund, said in a statement.

“It’s only been a couple of days and Ryan’s speakership is proving to be much the same as we have seen before with his immediate predecessor,” Long Simmons continued. “Both have shown an absolute disregard to the calls from millions of Americans for comprehensive immigration reform and a lack of compassion for undocumented immigrant families that continue to suffer as a result of our broken immigration system.”

“I am not very confident that Paul Ryan will be allowing any LGBT legislation to come before the House given the GOP’s move to embrace the Radical Right’s agenda over the past eight years,” Fowlkes said in a statement to Metro Weekly. “My friends at the Log Cabin [Republicans] must surely understand that their party is under siege by the conservative House Freedom Caucus, who will never allow the GOP House leadership to support any type of LGBT rights legislation.”

John Riley is the local news reporter for Metro Weekly. He can be reached at jriley@metroweekly.com
← Previous Story Kim Davis files appeal with 6th Circuit Court of Appeals
Next Story → Dept. of Ed: Trans discrimination is sex discrimination