Technology needn't be impersonal if you follow our gift suggestions 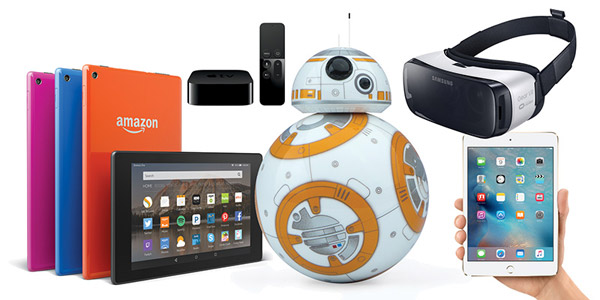 As we in the West grow increasingly detached from reality in drawing up our Christmas wish lists, technology is becoming an ever present inclusion. An often expensive way to show someone you care, the right gift can reap its rewards, but with so many options to choose from it can be a daunting prospect. From TVs to tablets, smartphones to fitness trackers, here’s our suggestions for easy tech gifts this holiday season.

If you and your partner regularly struggle to see what’s happening during Netflix and chill — and not just because you’ve transitioned to “chill” — then it might be time to surprise them with a new TV.

Recommended: Vizio M-Series, 43- to 80-inches, $550 to $4,000 — In terms of value versus performance, there’s really only one option for buyers this year. Vizio’s M series received plaudits from CNET and Reviewed.com for its picture quality, including being the former’s highest rated TV of the year. It ticks most future-proofing boxes: super-thin, LED, 4K, smart TV functions, available in a range of sizes. Not bad for a brand most people still haven’t heard of.

Money No Object: Samsung UN88JS9500, 88-inches, $20,000 — There’s something ludicrously extravagant about a curved, 4K TV that costs as much as many cars — and isn’t particularly smaller than some of them. Only for those with the deepest of pockets.

Simple Upgrade: If you’d rather not shell out thousands for a new set, Google’s Chromecast ($35) and Apple’s TV ($149) plug into a TV and improve its smarts in different ways. Google uses a smartphone as the remote, pulling in content via the apps on the phone. Apple uses Siri and some hefty processing to run the apps natively in its box, as well as games and other content. If someone you know keeps complaining about accessing Netflix, this is the gift for them.

An increasingly popular gift between family members and partners, smartphones are an expensive but impactful way to show someone you care about how many selfies they’re taking and how often they ignore you to respond to a message.

Recommended: Apple iPhone 6S Plus, $749 to $949 — The smaller iPhone suffers from terrible battery life and a mediocre screen, so it’s the bigger brother that will be on most Christmas lists. If you’re shelling out for a phone as a gift, chances are your recipient will have asked for an iPhone above all else. That’s the ubiquity Apple enjoys.

Honorable Mention: Google Nexus 6P, $499 to $649 — Unfortunately, one of the year’s best will likely get passed over this holiday season. After a few years of “almost there,” Google finally nailed their flagship smartphone thanks to Chinese manufacturer Huawei. Constructed from high quality aluminum, the 6P is premium, has one of the best cameras out there, a beautiful display, accurate fingerprint scanner, and a fast, fluid, and fresh iteration of Android. It’s also an absolute steal.

An extremely popular gift during the holidays — many homes have more than one tablet, while their rock bottom prices mean exchanging them as gifts can be a tempting prospect.

Recommended: Amazon Fire HD, 6- to 10-inches, $79 to $179 — If you have a friend, loved one or relative who wants to stream video, browse the internet and read books, Amazon’s tablets are a steal. They’re not the fastest, nor are their screens the best, but for the price it’s hard to argue with what the retail giant has accomplished. Perfect for tech-averse people who need something simple, and cheap enough to make an easy gift.

Honorable Mention: Apple iPad mini 4, $399 to $599 — It could be tempting to recommend the regular iPad, or even the nonsensical new iPad Pro, but why bother? The mini does it all, with the same dense screen, fast processor, fingerprint scanner, and build quality, but in a more portable size. Not the cheapest gift, but a guaranteed winner.

We all have that one geeky person who’s desperate to turn their home into something from science-fiction. Well, with these connected home gifts, you can help them achieve that goal for a pretty reasonable price.

Recommended: Nest Thermostat, $249 — It’s pricey, but Nest’s third-generation thermostat is both a cool gift for tech addicts and a nice way to help someone cut down on their fuel costs. The Nest learns your daily routine so that you needn’t adjust the thermostat ever again — it knows when you’re away, how warm you like it when you wake up, and to switch the boiler on when it’s cold, for instance. That means savings of ten to fifteen percent on heating bills. Even Scrooge would approve.

Honorable Mention: SmartThings Hub, $99 — The perfect introduction to the modern, connected home, the SmartThings Hub is the central controller for everything in your home. It will connect to optional sensors to detect various functions around the house. It’ll also work with other smart items such as Philips’ Hue smart bulbs, Sonos’ speakers and the Ecobee thermostat to offer granular control over every aspect of your home. That’s pretty cool.

With all the weight we put on over the holidays, an activity tracker could be either an offensive slight to a relative who misinterprets your intentions, or a treasured gift for someone seeking to get more in tune with their body.

Recommended: Misfit Flash Link, $20 — One of the cheapest ways to track your fitness, the Flash Link clips onto your clothes and detects the various movements you engage in during your day — including swimming, as it’s fully water resistant. It also features a “smart button.” Click the Flash Link and you can operate functions on your phone such as music playback, or shutter control for the camera. If you know someone who wants to get fitter, this is a low-risk way to help.

Money No Object: Withings Activité, $450 — Okay, this is actually a pretty ludicrous gift, but if you know someone who goes jogging in designer clothes and wouldn’t be caught dead with a plastic fitness tracker, this is the gift for them. That or a stern lecture on reevaluating their priorities. A Swiss-made watch masquerading as a movement tracker.

Virtual Reality is going to be huge in the next couple of years. More immersive than 3D and almost as fun as actually going outside, there’s a number of ways to sample it.

Recommended: Google Cardboard, Around $20 — Google’s solution is rudimentary at best, but if you want to give someone a cheap, cheerful thrill this holiday season, buy a Cardboard viewer (Google open-sourced the specs, so a number of people are making headsets) and grab an Android device or iPhone, slot it in, and get lost in some of the great apps built for it.

Honorable Mention: Samsung Gear VR, $99 — It only works with Samsung’s 2015 flagships, but the Gear VR is the most robust way to currently experience VR without spending a few hundred dollars. If you know someone with a Galaxy S6, S6 Edge, S6 Edge Plus or Note 5, this is a fun gift that’s more than just a curio.

For the Forgetful: Tile, $25 — Perfect for those who are constantly losing their keys, wallet, or any other such items, Tile is a tiny, power-efficient Bluetooth tracker that connects to your phone to let you know where you left your stuff. It works from 100-feet away, can help you find your phone by pressing a button on the tile, and even crowd-sources the hunt should you be out of range. Really nifty.

This IS the Droid You’re Looking For: BB-8 Droid, $149 — One of the highlights of Star Wars: The Force Awakens was learning that BB-8, the new, spherical droid not only works and wasn’t CGI, but can be bought by you and me. An expensive gift, but if you know anyone who loves Star Wars, it’s a price worth paying for some remote-control fun.