Unjust Cause: Just Cause 3 (review)

Just Cause 3 is one of the games I was most excited to play this year. The original Just Cause was one of my first “Wow” moments on Xbox 360, with its incredible scale and beautiful color palette. I played it to completion and for many dozens of hours more, revelling in its massive sandbox, it’s action movie gameplay, its parachutes and skydiving and gunplay and explosions.

When Just Cause 2 came along, it was more of the same but with greater refinements. It was smoother, bigger, the action flowed better, the explosions were grander. It was everything a sequel should be. Then came the announcement of Just Cause 3 — a game that promised to be bigger still, but with beautiful new graphics, a powerful new engine, and even more enjoyable gameplay. I couldn’t wait to install it.

After many hours with Just Cause 3 (

) on Xbox One, I’m heartbroken. Avalanche Studios aimed for something bigger, better, bolder, but what they produced was something broken, frustrating and bizarrely halfhearted.

My biggest complaint with Just Cause 3 is that, at least on console, it simply doesn’t work. On PC it’s a fast, fluid experience (though it can occasionally struggle). The 400 square miles of fictional Mediterranean islands that comprise Medici are rendered beautifully and load quickly. On Xbox One? Just Cause 3 rivals Assassin’s Creed Unity for the length of its load times — and its numerous performance issues.

It’s not uncommon to spend several minutes waiting for the game to boot up. Once it does, you’ll be treated to a frame rate that just barely scrapes 30 fps — and that’s at a reduced 900p resolution on Xbox One — and which quickly plummets as soon as you start doing anything. Signature gameplay elements such as blowing stuff up, driving, blowing more stuff up, shooting, blowing a few more things up, grappling up a building, and lobbing explosives at things to blow them up can reduce the game to a crawl. In areas where there are a lot of destructible items — and there are many of them, in towns, bases, castles and ports — the game enters what can only be described as slow motion, as it tries to render the action, but can’t do so at the required frame rate. It makes playing the game untenable for long periods of time — something made worse by the fact that performance actually degrades further the longer you play it, suggesting serious memory leaks.

All of this means that you can either enjoy Just Cause 3 in short bursts, or you’ll have to adopt a style of gameplay that runs in antithesis to the whole point of the experience. Rather than tether a mass of explosive barrels to a helicopter and drop them onto a moving target, you instead have to grapple onto the car and steal it. Yay. Instead of slamming a cargo plane into the front of a base, as you parachute to safety and fire rockets into the debris field, you instead have to stand on a hill and shoot a sniper rifle, or get up close and personal for the series’ trademark subpar gunplay. Yay. Whereas you’d previously do pretty much anything that resulted in ginormous, Bond-style explosions, now you’ll do anything to avoid them, lest you be rewarded with massive performance degradation. Yay? I don’t know about you, but Just Cause just isn’t very fun to play if I can’t live out my action movie fantasies.

The gameplay itself has also seen several changes. New this time around — and oft touted — is the wingsuit. Simply put, it’s a game changer. Rather than rely on pulling yourself along using the tether and a parachute, you can now open up a wingsuit and fly through the sky. It’s almost too finicky, requiring incredibly deft controls, but the thrill of skimming close to the ground, tethering your way out of buildings or inclines at the last second, is arguably one of Just Cause 3‘s biggest strengths.

So, too, is the new tethering system. You can now have multiple tethers, which can pull objects together and be detached as necessary. You want to carry six cars under your helicopter and drop them like bombs? Sure! You want to create your own slingshot, firing enemies out of their base? Sure! You’d like to attach a cow to a gas canister and send them both shooting into the sky? You’re a bit weird, but sure! The ways in which the tether can now be used instead of guns or explosives makes for some of Just Cause 3‘s best moments. Experimenting with new ways to pull down structures or defeat enemies or get rid of vehicles makes for joyous fun. (Pro tip: during chase sequences, attach a tether to the road and another to the hood of the vehicle chasing you and prepare for physics-based hilarity as it flies off into the distance.)

Unfortunately, Avalanche Studios has also introduced a new upgrading system that’s more hassle than it’s worth. In theory, it’s great: you only complete challenges to upgrade the things you use. If you want better explosives, you only need do the explosive challenges. If you want more mods for cars, do the racing challenges, etc. However, it locks away things that prior games gave players from the start. Why they thought preventing gamers from zooming in with guns, for instance, was a good idea is beyond me.

It also adds a couple of annoying quirks into cargo drops. The actual system is much better: collect a beacon from liberated towns or bases and then whenever you want a drop, call it up and select a main weapon, a secondary weapon, a vehicle and some explosives. It’ll then be immediately dropped to wherever you throw the beacon. Great. Except you’re restricted in how many beacons you can carry and there’s a respawn time limit on items which only frustrates. More than once the game would drop in a helicopter or plane, only for it to explode on landing. Rather than spend more in-game money and buy another, like in prior games, I now need to use another beacon and then wait for a predetermined amount of time — such as fifteen real minutes — to spawn another. Come on, Avalanche? Really? It’s my game, let me spam in jets. Sure, you can unlock a mod that removes the time limit, but that will take a lot of playing to obtain.

And that’s where the issue is with Just Cause 3, it demands that you play it to get the most from it — something many won’t want to do thanks to its numerous performance issues. And that’s not all. The narrative — never a strong point for prior games — is even more disjointed and has even more terrible writing than before. If you die, it can take upwards of 90 seconds to respawn. Challenges can take a minute to load — and just as long to reload if you retry them. Everything about Just Cause 3 feels slowed down, lethargic, and as though Avalanche are punishing players for trying to enjoy their game.

What makes it worse is that, when the game actually works, it’s glorious fun. Sure, the new controls take a bit of getting used to, including the wingsuit and the lack of a few quick actions, such as jumping between vehicles. But the Just Cause hallmarks of ridiculous, over-the-top action movie-style stunts are here, the massive explosions have never looked better, the sound mixing on competent speakers is glorious, the island of Medici is a saturated beauty, and the vehicles have never felt tighter to control.

In my time with Just Cause 3 I’ve had some of the most enjoyable moments in gaming of this entire year. But I’ve also had some of the most frustrating, the buggiest, and the slowest. If you really want to experience a great Just Cause game on Xbox One, download Just Cause 2 through backwards compatibility. Unless Avalanche can patch the issues, Just Cause 3 is a game that only those who can stomach having their play sessions severely neutered should buy.

Just Cause 3 is available now on PC, PS4 and Xbox One. 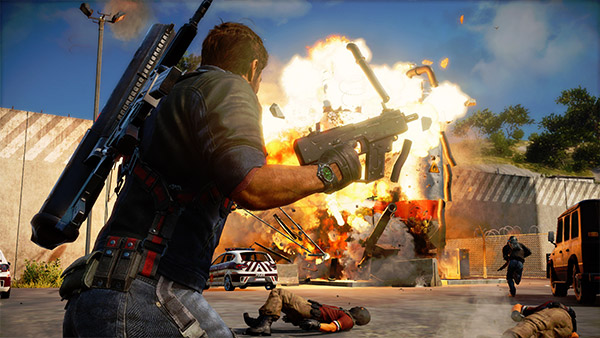